How do you feel about leftovers in your kitchen? Guilty when you have to throw them away? Resourceful when you are able to make them into more meals? Those sentiments and an eagerness to help feed Arkansas families are at the heart of an extraordinary program quietly spreading through the state since 2008.

Let’s say you have three problems to solve. Your state has too many hungry people; the community food pantries have few sources of fresh food; and farmers have too many extras in their fields at the end of their season with no resources to glean it and nowhere for it to go. 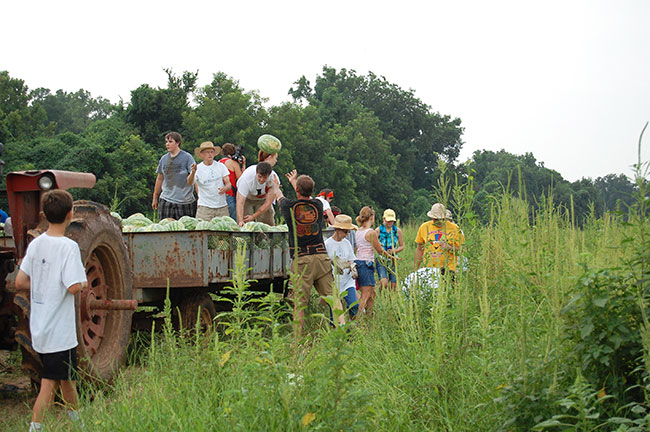 The Arkansas Gleaning Project connects resources to address all these problems at once. Hundreds of volunteer workers glean donations of fresh fruits and vegetables from hundreds of acres of farmland to be shared with Arkansas’ hungriest families. 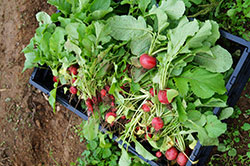 The project, created by the Arkansas Hunger Relief Alliance (AHRA), is a shining star of creativity, goodwill and resourcefulness in the state and a national model for other states’ programs. From the farmer who plants strawberries to the volunteer who picks the extras to the shut-in grandmother who is happy to be given fresh fruit to eat, the program is about making the most of the cycle of life. Since its inception, the project has saved nearly 8 million pounds of fresh food, then distributed it to regional food banks and community food pantries across Arkansas.

Nancy Conley, communications director for the AHRA, said national statistics consistently have Arkansas’ “food insecurity” at the top of the charts, especially for children and seniors. She said food insecurity is defined for their purposes as an affirmative response to at least one of two questions:

A win-win for everyone
Amid the growing excitement surrounding fresh, local produce and meats from Farm-to-Table and Farm-to-School programs, the Arkansas Gleaning Project connects the last part of that circle, Conley said. Farmers and even amateur growers notoriously end up with more produce than they can sell, cook or can.

Instead of those extra fruits and vegetables being ploughed under or thrown away, the project helps growers collect the excess and get it to food banks, which in turn distribute it. For their generosity, the farmers get a tax benefit. Michelle Shope, the project’s logistics coordinator, said participating improves farmers’ annual yields, which lowers their insurance costs. 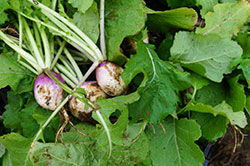 “It’s an all-round win-win,” Conley agreed. “I don’t know any growers who want to see their fruits and vegetables ploughed under. Farmers grow plants in the hopes that someone will eat them. No one wants them to rot.”

Much of the extra produce is simply not attractive enough to sell in retail grocery stores. Misshapen or ugly tomatoes, pears and other food are perfect for the Arkansas Gleaning Project. “Not pretty does not equal not nutritious,” said Shope. “We love those leftovers.”

Another way people participate is through the project’s Grow-A-Row program where growers dedicate a row (or more) at the outset of the season to be farmed and donated to the project at harvest. Urban gardeners, community gardens and people with personal backyard gardens can be a part of the program. The project hopes to develop more local volunteer groups who will come and gather extra produce from the non-commercial gardens. The gleaning project’s website also features information on their participating pantries to facilitate getting donors in touch with the nearest resources in their own communities.

Conley and Shope credited a large portion of the program’s success to its partnership with the Arkansas Department of Correction. Shope said the department already had select crews of inmates regularly providing maintenance on approved grounds in the region, such as highways. When the gleaning project approached the department about the possibility of the inmate crews helping glean donated crops, the department readily agreed, making the project a priority. It’s not extra work for the inmates, Shope explained; it’s occasional, different work. 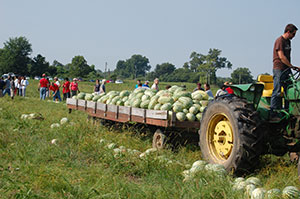 The project’s annual Watermelon Crawl brings the public out for food, games, and harvesting giant piles of fruit.

“We are just putting existing resources together,” Shope said. “There were no additional costs to us or the state, no hoops.” Shope added that the department’s crews made an immediate difference. In 2009, the project collected 289,000 pounds of unused produce for the hungry. In 2010, the year the corrections department started helping, the program’s collected produce was 830,000 pounds. Today, with help from the corrections department and other sources, the Arkansas Gleaning Project collects between 1 million and 1.5 million pounds of unwanted produce to distribute to state food pantries.

“Every one of them (inmates) knows what a food pantry is,” Shope said. “Many have family members back home depending on the pantries for food while the inmate is incarcerated. Every time, they thank me for giving them a way to help those at home.”

She added, “At the end of the day in the field, we’re all appreciative of each other’s work on the project.”

Cooperation makes all the difference for the program, Conley said. “That’s the number one thing we need — more partners!”

These potential partners come in many types: farmers, food pantries, urban growers, grocery chains, trucking companies, volunteer groups and others who can help get the nutritious food to the people who need it most.

Partnering with other hunger- or nutrition-related programs also makes a big difference for the Arkansas Gleaning Project. Conley said a GardenCorps (part of the larger AmeriCorps program) volunteer is working to establish gardens at the AHRA-partnering food pantries around the state. By having a good vegetable garden on site, the local communities can produce some foods themselves to supplement what they receive from outside sources.

Participating supermarkets like Walmart and Kroger donate unsold produce to the regional food banks. The AHRA also teaches food pantry workers how to teach Cooking Matters courses for the food pantries’ clients, so they know tasty and healthy ways to prepare the fresh food.

In a former private golf course now converted to a city park, the gleaning project has another partnership growing with the City of Little Rock. At Western Hills Park are several large, tilled fields with water pumps, each sporting Arkansas Gleaning Project signs. The project assigns volunteers and resources to plant, tend and glean these fields from start to finish during the growing season, and park visitors get exposure to the inspiring program. 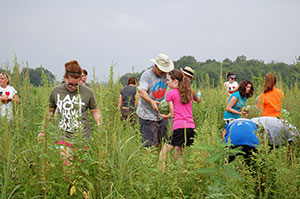 This spring, a class of middle school students from Pulaski Heights Elementary School had a “field trip” to Western Hills Park’s gardens. Conley said few of the children had first-hand experience with a working garden.

“The kids had a vague idea that foods in the store once grew in the ground, but seeing it up close made it real for them,” Conley said. “Suddenly, they got it.”

Near the end of the gardening field trip, one enthusiastic girl said, “Wait, hold on. Is this something we could do at home, too?”

Conley responded that it is something people can do at home. She added that such efforts by the public will be key to the project’s future.

“The Gleaning Project’s success is a drop in the bucket of the hunger need in the state,” Conley said. “But it is something valuable we can all do to help each other. Work with us.”

For more information on the Arkansas Gleaning Project, visit www.arhungeralliance.org or call 501-399-9999.