He’s soft and sweet. I love it when he wakes me up in the morning with kisses.” 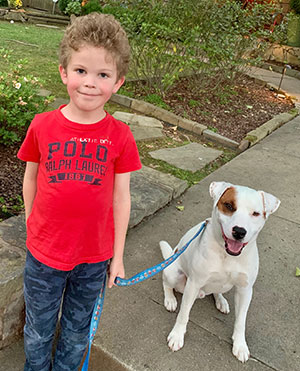 Asher and Nama Scarborough take frequent walks through the neighborhood. Nama says of Asher, who graduated from the Paws in Prison dog training program before being adopted, “They really trained him. He can fetch, sit, eat, run and sleep really well.” courtesy of Fred Scarborough

Those are the words of new dog owner Nama Scarborough, 6, of Little Rock. Nama’s family adopted Asher, a 1-year-old mixed breed, around Memorial Day. His parents, Mary and Fred, had been planning to adopt a dog for Nama and his 16-year-old brother, Isaac, but with summer travel canceled, the coronavirus accelerated the timing. Fred says, “With the pandemic, it was a great time for our boys to be home and really bond with the dog and give the dog the care it needed, and for us to learn to be good caretakers of the dog together.”

Like the Scarboroughs, people across the nation have been adopting “pandemic pets” for companionship during the shutdowns, even clearing their local shelters. The new pets help relieve stress and give families a positive focus at home, says ArkanPAWS founder Danielle Maddox. “Our adoptions increased because a lot of people are at home, so it’s a good time to spend time with the dogs, potty-training and getting them acclimated to the new environment.”

Fred says Asher, adopted from Last Chance Arkansas and fully trained in the Paws in Prison program before arriving, fit in right away. “Adopting Asher has been a transformative process for our family. Bringing the dog into our home has required adjustments for us, but those  adjustments have been met with such a reward. He is an inextricable part of our family already.”

In Conway, the pandemic instigated a pet adoption more indirectly. Kirk and Kerry Jordan were dog-sitting their 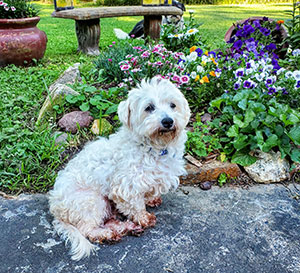 Ned, newly adopted by Kerry and Kirk Jordan of Conway, enjoys his new life outside the cage he’d lived in for eight years before being rescued by a shelter near Mountain Home and adopted by the Jordans. photo Kirk Jordan

Dallas-based daughter’s Maltipoo, Winston, because of the shutdowns. Formerly dogless, Kirk says Winston has been such a joy that Kerry started pining for a similar dog of their own. Her online search led them to a Mountain Home area rescue that had an 8-year-old Maltese who was bred in a puppy mill and had spent his entire life in a cage.

Kirk says, “We saw this little dog with big black eyes in need of adoption. We said, ‘He’s a cute little dog, but he needs some loving help.’”

Named Ned, the dog was highly skittish at first and had underdeveloped hind legs, and hearing and sight deficits. He’s getting healthier now, and Ned seems infinitely happier at the Jordans’ home. “We’re seeing delightful transformations already,” Kirk reports. “He’s got a good appetite. He loves romping around and playing with the other dog. Ned’s got a ways to go until he’s fully comfortable with us, but we have really enjoyed him.”

Arkansas’ animal shelters, Humane Societies and dozens of other rescue groups have had to adapt to suddenly altered circumstances in 2020. Most of the organizations’ physical facilities closed temporarily to reduce the spread of the virus, and pet adoptions — for the groups that continued them — went almost entirely online, with adopters only meeting the potential pet after an approved application and an individual appointment.

Fayetteville Animal Services (FAS) has been closed to the public since the beginning of March, with adoptions taking place mostly online. Justine Lentz, FAS’ animal services superintendent, says, “It’s actually worked out really well. They’re in and out of here once, versus the two or three times they would normally be. It reduces exposure for all of us.”

Lentz says FAS has been working closely with the community to increase foster homes as shelter alternatives and to empower people who find strays to try reconnecting them with owners themselves before contacting the shelter. “Getting them the tools to help them figure out how to find that owner, whether it’s getting the pet scanned for a microchip, posting on Facebook, or using the Nextdoor app is better for the animal than having it come to the animal shelter, be more stressed out and need shots just to be safe here. And luckily, our community has really stepped up to help in a big way.”

In El Dorado, the Union County Animal Protection Society (UCAPS) has a shelter of about 300 animals, mostly dogs, and a separate UCAPS Adoption Center with three cat rooms and a handful of dogs.
The shelter closed to the public, but volunteers continued to keep the Adoption Center open on weekends. UCAPS board president Tessa Walker says, “Keeping the center open, we were also able to give families something to do; just getting to go spend 30 minutes in one of the cat rooms playing with our cats can be a big help.” 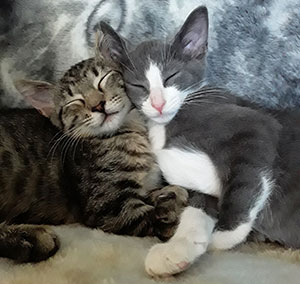 August is deep into “kitten season,” when seasonal litters of kittens are born, filling shelters with kitties that will be adoptable once they are old enough. photo courtesy of UCAPS Adoption Center

more time to upload pictures of their adoptable animals onto petfinder.com (a popular site of adoptable rescue animals), a time-consuming but vital task.

Even for organizations that fully shut down, there are signs of hope. For instance, North Little Rock Animal Shelter closed for more than two months, doing no public adoptions, then opened June 1 to a huge rush. “We had about double our normal number of adoptions in June,” says director David Miles. “We were the only shelter open in this area, so as soon as they could, people came out and cleared us out.” He says interest has remained high even into July. “Today, we’ve been open nine minutes, and there are already about 10 people here. We’ve only got three adoptable dogs at the moment, so I expect we’ll clear them out today, too. But there are so many stray animals, we always fill up again.” 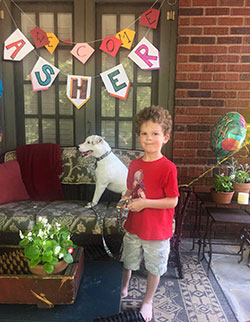 Six-year-old Nama Scarborough of Little Rock welcomed home his family’s new pup, Asher, with a doggie birthday party on the porch. Asher was adopted from Last Chance Arkansas, one of many Arkansas rescue organizations continuing their mission throughout the pandemic. photo courtesy of Fred Scarborough

rather as a network of foster homes for rescued animals. Their interactions normally begin online. But, they’ve had to adapt, too. LCA board member and volunteer Stacy Sells says that while the increased interest has been welcome, it’s also meant increased scrutiny of applicants’ long-term suitability.

“We know you’re at home now during the pandemic, and you’re bored, but when you go back to work, it’ll be a whole different ball of wax. For the sake of the dogs, we’ve tried to do our very best interviewing adoption applicants to make sure they understand how different it will be when they go back to work,” Sells says.

ArkanPAWS’ Maddox, who lives in the country near a notorious animal dumping spot, says the pandemic has seemed to increase the number of abandoned animals, already a big problem. “Quite a few dogs we rescue from right there on the dirt road.”

The shelters report that owner surrenders are also up as the crashing economy left thousands of Arkansas families financially struggling. Sells says such surrenders are heartbreaking; the hardest to witness are the ones involving children saying goodbye to their pets. “Dogs become part of the family, but when families are challenged with money, often that’s the decision they have to make,” she says.

That ties into another challenge facing LCA and countless other nonprofits: fundraising. “America’s focus has been on feeding suffering families, as it should be,” Sells says. “We normally do fundraisers on Facebook, but this month we didn’t ask for money; we just felt like Arkansas’ focus needed to be on hungry humans. So, we’re a little behind on our vet bills.”

Have pets, will travel

Transports of animals to rescue organizations hundreds of miles away are a subset of animal rescue. Living in 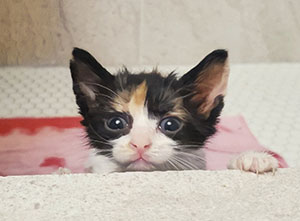 A tiny kitten peeps out at the world at the Union County Animal Protection Society’s Adoption Center (UCAPS) in El Dorado. The center has three rooms of cats, many ready for adoption. photo courtesy of UCAPS Adoption Center

Arkansas, it may seem inconceivable that any state could need more animals to adopt, but the South has an excess of unwanted cats and dogs, while other parts of the country are in short supply. The national adoption supply chain broke down for months in places, but some groups, including UCAPS and ArkanPAWS, were able to continue transports.

Often, organizations combine resources to fill an air-conditioned tractor-trailer with up to 100 crates of animals headed to other states. UCAPS does this, bringing animals to Little Rock to be loaded into the trailer, along with other rescue groups’ animals. “Participating in the transports has been a lifesaver for our shelter,” she says. “And we have individual transport requests from all over.”

Maddox says 80% of ArkanPAWS’ adoptions are transports, and they have been transporting more animals than ever to her counterpart at a Rhode Island rescue organization. With some of the regular transports down for the count, Maddox and the Rhode Island rescuer decided to each rent a delivery van and meet halfway, in Virginia, to do the transfer. ArkanPAWS most recently transported 37 cats and dogs in one trip, each with a forever home awaiting them in Rhode Island.

At the heart of it

Whenever you decide to adopt a pet, 6-year-old Nama Scarborough has some things he wants you to understand. (His advice is dog-specific, but applies to cats and other animals, too.) “There are all kinds of dogs. Sometimes they need a new home because they’ve had a hard time. You just have to love them.”