There’s nothing more comforting in winter than piping hot soup, and I have four varieties to share.

Bacon Corn Chowder, with a beautiful balance of smoky, savory and sweet flavors, is delectable.

And if you love Hot & Sour Soup at Chinese restaurants, you won’t believe how easy it is to make at home. Enjoy! 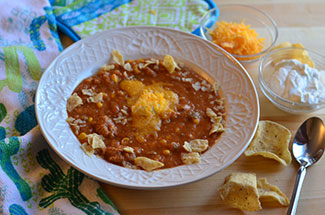 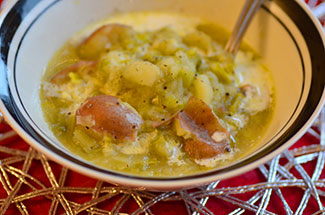 Cut the white parts of leeks in half horizontally, and  place in a bowl of water and shake. Allow to rest for 10 minutes to remove dirt. Slice the leeks like you would an onion.

Over medium-high heat, melt butter in a large pot. Add leeks and cook for 5 minutes. Add salt and pepper. Add bay leaves, potatoes and chicken stock. Cook for 20 minutes or until potatoes are tender. Smash potatoes with a masher to thicken soup. Discard bay leaves.

Spoon soup into bowls, adding a dollop of heavy cream to each.

Note: You will not use the green parts of the leeks for this recipe, but freeze and save them for later. The green parts are great to add when making chicken stock. 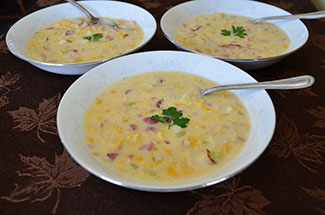 Cook bacon in a large, heavy-bottom pot. When bacon is halfway cooked, add celery and onion and cook 5 minutes. Add flour and cook 3 minutes, stirring often. Add potatoes and chicken broth, stirring to incorporate any brown bits from bottom of the pan. Bring mixture to a boil and cook for 10 minutes or until potatoes are fork-tender. Reduce heat to medium-low. Add corn to the soup and stir. Slowly stir in heavy cream. Add salt and pepper to taste and serve.

This Hot & Sour Soup is not too spicy because I wanted it to be family-friendly. You can add more heat with chili sauce, red pepper flakes or even sriracha. 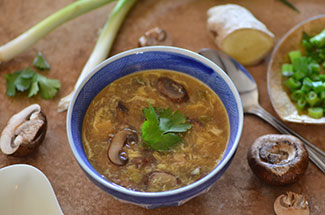 In a large pot, heat the broth over medium-high heat. When the broth begins to boil, add the mushrooms, onions, shrimp, ginger, soy sauce, sesame oil and vinegar. Reduce heat to a gentle boil and cook for 10 minutes.

In a small bowl, stir together cornstarch and hot water. Add cornstarch mixture to soup, stirring until it thickens. Stir in chili sauce, tofu and shredded chicken. Cook another 5 minutes. Turn off heat.

In a small bowl, whisk the egg. Using a fork, drop swirls of the egg into hot soup. (Do this a little at a time and you will end up with beautiful ribbons of egg in the soup.) Add pepper to taste. Garnish with green onion and cilantro and serve.