In a capital city with more than its fair share of destination neighborhoods, what’s an up-and-comer to do to make its mark? If you’re SoMa (South Main Street), you relax and let your laid-back vibe speak for itself. 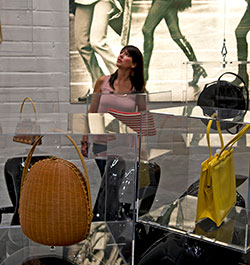 Take a quick trip through time at the Esse Purse Museum, through the cultural lens of women’s handbags and the things that filled them. photo courtesy of ARKANSAS DEPARTMENT OF PARKS AND TOURISM

That patience has paid off in spades. The 2006 construction of The Bernice Garden, a lovely and welcoming outdoor gathering spot at Daisy Gatson Bates Avenue and Main Street, sparked the beginning of SoMa’s current incarnation as an eclectic assemblage of locally owned places to eat, shop, explore, play and linger. It hosts a Mardi Gras parade every February and a cornbread festival every October. The Bernice Garden Farmers’ Market draws local growers and artisans every Sunday from April through November. Neighborhood businesses regularly hold special events, from South on Main’s popular jazz and Americana concert series to special exhibits at the Esse Purse Museum to The Root Café’s annual beard-growing, hot-pepper-eating and pie-baking contests. (You can keep tabs on the neighborhood’s schedule through its website, www.somalittlerock.com, and its Facebook page.)

With its bright flowers and locally raised meats and produce, the family-friendly Bernice Garden Farmers’ Market is a mainstay of the SoMa area. photo courtesy of ARKANSAS DEPARTMENT OF PARKS AND TOURISM 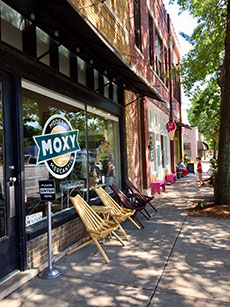 “It’s been really interesting to watch the development,” said Sally Mengel, co-owner of Loblolly Creamery and a SoMa resident since 2010. “It’s been neat to see all these creative, local small businesses come in. They all kind of complement and balance each other.”

Creativity is a common thread: Several businesses offer supplies and classes in making and remaking various things, along with the opportunity to buy the products of other people’s creativity, if that’s more your speed. It’s just a fun place to be, whether you’ve got $10 in your pocket or $1,000.

“I always describe it as a small town in downtown,” said Hollis Schild, a member of SoMa’s Board of Directors and a longtime resident. “The thing I like about SoMa is you can just be who you are. We’ve got all colors, all religions, all political beliefs.”

Officially, SoMa extends all the way down Main Street to 29th Street, but its heart occupies a five-block stretch between 12th and 17th. You could walk it end to end in 10 minutes if you wanted to — or while away an entire weekend within its borders.

“Somebody could literally spend the day here and not do the same thing for more than an hour,” said Phil Brandon, head distiller at Rock Town Distillery, which recently relocated its spirits-making operation to a large building at 12th and Main.

A day in the life 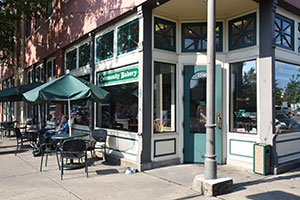 Let’s put that claim to the test. Say you’re an early riser, and you start the morning off at Community Bakery, a SoMa institution since 1952. You polish off your pastries and coffee, enjoy the people-watching for a bit, and head south to explore the sculpture collection at The Bernice Garden. Maybe you’ve come prepared and you fasten your own tiny padlock around the garden’s Love Locks sculpture, or take a selfie with the quirky raven peering down from his perch above the sidewalk.

Now it’s time to shop, so you grab a latte at Boulevard Bread Company and spend the rest of the morning browsing through SoMa’s retail establishments. You pick up a skein of locally produced yarn and drool over some eye-popping mid-century furniture at South Main Creative, sample organic local products at The Green Corner Store, cross off all the hard-to-buy-for people on your Christmas list at Moxie Mercantile, mentally redecorate your house as you stroll through Sweet Home Furnishings and Reinvented Vintage, and pick out an unusual houseplant at Electric Ghost.

Hungry yet? Follow the crowds to The Root Café, where owners Jack Sundell and Corri Bristow-Sundell have created what might be the most welcoming little restaurant in the city. Their almost missionary zeal for living the local-farm-to-table gospel and building community through food has brought them plenty of press since they opened in 2011. The food is fresh, creative, thoughtful and delicious, and there’s no better place to linger on a nice day than the Root’s front porch. 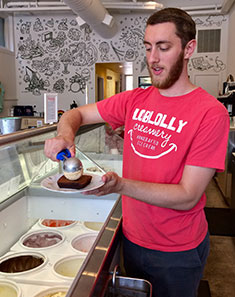 Loblolly Creamery is beloved by locals for its handcrafted ice cream.

Now to fill the afternoon. No problem: Start next door at the Esse Purse Museum and Store, with a permanentdisplay of women’s handbags from throughout the 20th century as well as temporary exhibits.

Then settle in for a dessert experience at Loblolly Creamery, easily one of the most popular spots in SoMa. If you can, choose from the selection of small-batch ice creams and sorbets, many made with ingredients from Arkansas farms.

If you can’t choose, spring for a flight and sample 11 flavors. Maybe you’ll want to share, maybe you won’t. No judgment here.

While your sugar buzz is in full throttle, head over to The Escape Little Rock and pit your problem-solving skills against one of the themed escape rooms. If you make it out alive, reward yourself with a tour and tasting at Rock Town Distillery or a couple of craft beers at Core Brewing Company. Relax and people-watch for a while, or take a stroll around the Governor’s Mansion Historic District and think about what’s for dinner: Pizza at Raduno Brick Oven and Barroom? Tacos at Dos Rocas Beer and Tacos? Upscale downhome Southern fare at South on Main? Back to the Root?

After dinner, odds are good you’ll find some music playing somewhere in SoMa. You can also wind down the night at Midtown Billiards, a neighborhood institution with nationally acclaimed burgers. Start the next day anew with some coffee and breakfast at Community Bakery when it opens at 6 a.m., 7 a.m. if it’s Sunday. 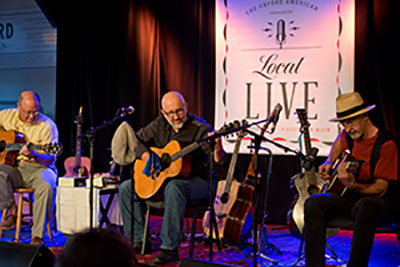 South on Main, a restaurant and concert venue partnered with next-door Oxford American magazine, regularly brings top-notch talent to its stage. photo courtesy of ARKANSAS DEPARTMENT OF PARKS AND TOURISM

Jennifer Barnett Reed is a freelance writer who went to journalism school in Chicago, married a guy from Missouri, and is now raising two small humans and one little mutt in her childhood home in Little Rock.