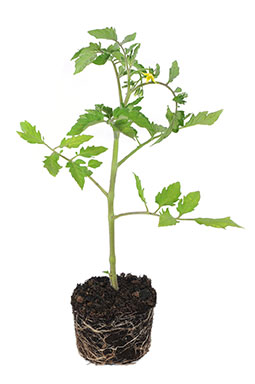 What a weird year it has been for weather. From early low-cold temperatures in December, which we thought was going to lead to a cold winter, we had almost no winter. With one of the warmest Februarys on record, our gardens began growing at warp speed. This early season led some gardeners into thinking it was a good idea to plant tomatoes in February or early March. For those early birds, we say “plant early, plant often,” which is something we don’t want to see happen.

Regardless of the temperatures in February and March, gardeners should still limit their vegetable plantings to cool-season vegetables. Now that April is here, it is time to plant tomatoes, peppers, corn, squash and cucumbers. If you planted tomato plants in February or March, and even if you protected them from a freeze, the plants have been exposed to low temperatures and their growth may be negatively impacted for the rest of the season. If you see purple coloring on the foliage, that is often a sign that they were planted too early. You may have an early tomato planting, but you won’t have a huge harvest. The key to any gardening is to plant the right plant in the right place and at the right time. 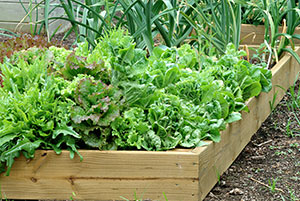 Lettuce garden in a raised bed.

April is a huge gardening month. From planting warm-season vegetables to planting summer annuals and beginning to introduce summer tropical plants, there is so much to do. Visit your local nursery often, since new shipments of plants are arriving on a daily basis. The biggest problem is trying to decide what to plant. While we often hear April showers bring May flowers, I think this year we might need to change it to March showers bring April flowers. Our tulip magnolia (Magnolia soulangeana) was here today and gone tomorrow in February in many yards with the warm weather. Cooler springs help flowers last longer.

If your spring flowering shrubs have finished blooming, start pruning if they need it. When pruning, know why they need pruning and time it based on when they bloom. Knowing the growth habit of the plants will determine how they should be pruned. Some spring-blooming shrubs benefit from annual pruning, including forsythia, which should have a third of the old canes pruned annually. Azaleas and camellias only need pruning if they have overgrown their space or need some shaping. Fertilize spring-blooming shrubs once they finish flowering.

Lawns are greening up, and it isn’t all weeds that we see. Wait to fertilize until the lawn grass is totally green to make sure you get the full benefit of all the nutrients. Winter weeds are either dead or dying, so don’t worry about them. Do be on the look-out for summer weeds in lawns and flower beds. 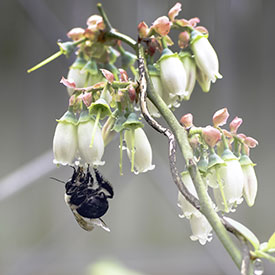 A bee gathers nectar from blossoms on a blueberry bush.

Our mild winter allowed us to harvest many vegetables earlier than normal, and some have bolted (gone to seed) earlier than they should. Once you see the seed head emerging, harvest and use as soon as possible. Right now we are seeing a good harvest of kale, cabbage, lettuce, broccoli and more cool-season vegetables. Strawberries are also bearing early, and we will have blueberries sooner than expected as well. Once you finish harvesting your strawberries, thin them out and fertilize. You can also plant new blueberry, blackberry and strawberry plants now. If you aren’t growing your own produce, farmers markets are opening all over the state.

Spring-blooming bulbs bloomed early and finished early. Many of them have completed their six-week green-growing cycle, and the foliage can be cut down. It is too late to fertilize them, but make sure they got at least six weeks of green growth after bloom so they will bloom again next year.

Houseplants can gradually be moved back outdoors. Don’t push your luck and do it too early, but do gradually expose them to sunlight. Many gardeners find they enjoy getting their houses back once they move all the plants back outside.

As temperatures heat up, insects and diseases will also increase. Walk your garden regularly and scout for pests. The earlier you spot a problem the sooner you can handle it. April is a great time to be outside gardening, so wherever your interests lie, get outside and garden!