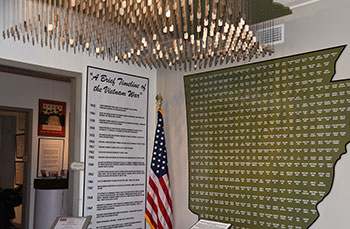 Walking in the front door of the Jacksonville Museum of Military History, the first exhibit to greet you has almost 600 metal dog tags hanging from the ceiling in front of a large, Arkansas-shaped plaque. Each dog tag has the name and hometown of an Arkansan killed in action. Each fallen soldier and his hometown is represented on the plaque.

This powerful sight is but one of the stories told at the 15,000 square-foot museum, which honors the servicemen and women who participated in military conflicts involving the United States. In particular, it’s a museum about local military history. Inside, you’ll find the personal stories of Arkansas veterans and of military events with deeply local ties.

Located minutes from the Little Rock Air Force Base, you can’t miss it: Just look for the sprawling white building sandwiched between a Vietnam-era Huey helicopter and an F-15 fighter jet of similar vintage. But what you see today is significantly different than how the museum was originally planned. Like the soldiers it honors, the Jacksonville Museum of Military History’s own backstory is one of turbulence and perseverance. 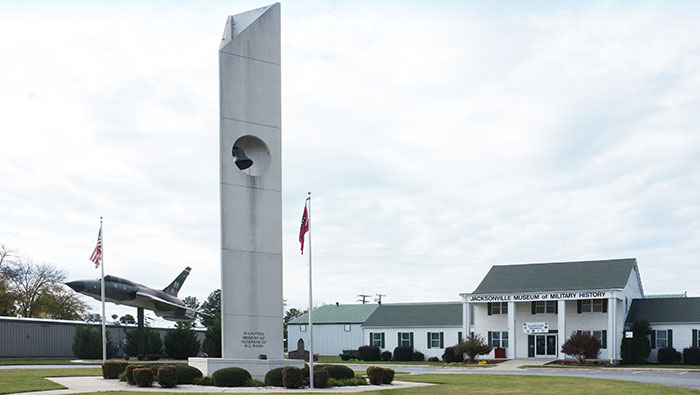 Director DannaKay Duggar said the museum “morphed several times” from conception to operation. “Originally it was going to be a static air park museum,” she said.

That plan, however, was nixed when organizers learned how much it would cost to maintain such a park. Instead, plans pivoted to the history that was such an important part of the city Jacksonville has grown to be. The museum that exists today was the brainchild of the late Ben Rice, a Jacksonville attorney. Rice wanted to honor his mother and the other 13,000 women and men who worked at the Jacksonville Ordnance Plant during World War II. 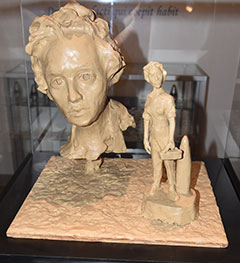 Clay model of a woman working at the WWII Jacksonvile Ordnance Plant, by the son of one of the workers. The museum is collecting donations for a bronze sculpture of the piece. photo Sheila Yount

The factory, which opened in early 1941 and was located on 7,000 acres, closed after the war. But Duggar said that during that time, Jacksonville’s population jumped from 400 to more than 40,000.

“Seventy-five percent of the workers were women, and they produced over 80 percent of all detonators used in American bombs,” Duggar said.

Appropriately, the museum sits on the foundation of the ordnance plant’s administration building. Rice was able to collect artifacts and memorabilia from many of the people who worked at the plant, and several reunions were held. Soon, though, plans for the museum changed again as its mission expanded to commemorating U.S. military personnel and the wars they fought in. 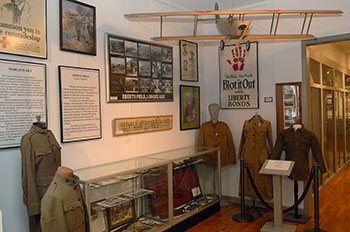 A World War I display illustrates the life of soldiers at Eberts Field in Lonoke, an aviation training center for the war. photo Sheila Yount

Besides the story of the ordnance plant, locally focused exhibits tell of the “Action at Reed’s Bridge,” Jacksonville’s own Civil War battle; of Eberts Field World War I aviation training center in nearby Lonoke; and, of course, the Little Rock Air Force Base.

“Our focus is local and regional,” Duggar said. “We do the best of our ability to cover all branches of service, but of course, the Little Rock Air Force Base is our primary story.”

Starting with the Civil War, exhibits cover Arkansans’ involvement in every U.S. war, including in Iraq and Afghanistan. A separate room is dedicated to illustrating what was happening on the homefront during WWI and WWII — all the activities and sacrifices women and families back home in the states were undertaking to support the overseas war efforts. 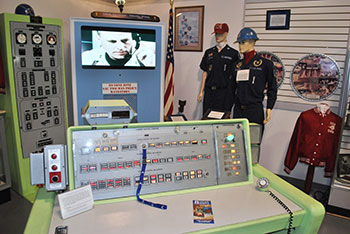 photo courtesy of ARKANSAS DEPARTMENT OF PARKS AND TOURISM

An exhibit of artifacts from the 1980 explosion of the Titan II nuclear missile silo near Damascus in Van Buren County is open to the public, even as it is still under construction. The exhibit includes a replica warhead and an original Titan II missile control board, as well as equipment, tools and protective suits worn by crew members. You can also watch a video about the explosion and the 1965 explosion at the Titan II Launch Complex near Searcy where 53 were killed. 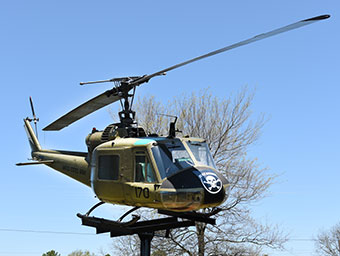 The museum acquired the Huey helicopter used in Vietnam from a private donor. Duggar explained that locals wanted to restore the helicopter to its original Vietnam markings, which had been removed over the years as it was recommissioned. No amount of research would reveal that specific helicopter’s history, including its mascot. “I tried researching, but I kept hitting a brick wall,” Duggar said. “We couldn’t find anything.”

The museum had the helicopter mounted on a post on the grounds, still hoping to restore it someday. Not long after that, she said, the answer to all her questions walked in the front door.

“I was at the front desk and this guy walks in with his wife,” Duggar said. “He goes, ‘My name is Sam Grimes. I’m from Snowflake, Arizona. I was the original crew chief and door gunner on that helicopter, and I have been looking for it for six years.’ My jaw dropped. I swear he was sent from heaven.”

Using the Huey’s serial number, Grimes had tracked its location to the museum. He stopped at the museum on his way to a reunion of his squad in St. Louis. Grimes told Duggar the crew was The Buccaneers, and sent photos of the helicopter’s original markings. The local Air Force Reserves squad offered to restore it, and worked directly with Grimes to get it just right, as it is today. 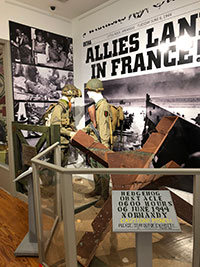 Each April since 2011, the museum holds a popular Welcome Home Vietnam Veterans Day. Duggar said the U.S. Department of Defense later adapted Jacksonville’s event for similar events around the country. Each May, the museum hosts an annual Heritage Day event around Memorial Day, this year on March 26. In the spirit of Memorial Day, make trip here to learn about and honor the veterans who served, and those who are still serving today.