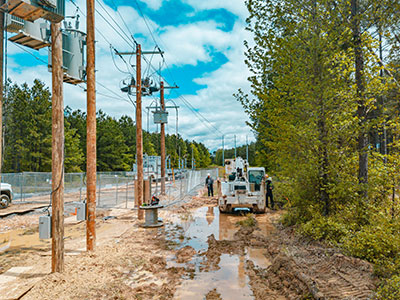 Challenging terrain made power restoration difficult in the aftermath of the April 12 storms that swept across south Arkansas. photo Chance Allmon

and leaving thousands without power.

Hardest hit was C & L Electric based in Star City. The high winds downed trees and power lines across the co-op’s eight-county service area, leaving more than 21,000 members without power at the peak of the outage.

Line crews from the co-ops were assisted by crews from other co-ops not affected by the storms, as well as by Arkansas Electric Cooperatives Inc. (AECI), the statewide service organization for Arkansas’ 17 electric co-ops.