People today are trying to eat healthier, and so-called “super” fruits are gaining in popularity. One of those 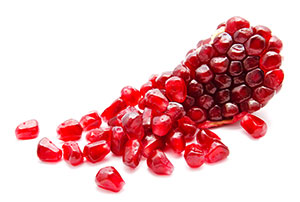 “super” fruits is the pomegranate.

Pomegranate (Punica granatum) is native to the Middle East. It has been cultivated and naturalized over the entire Mediterranean region since ancient times. It wasn’t until the 16th century that Spanish settlers introduced the plant to Florida and California. Commercially, it is still mainly grown in the U.S. in the drier parts of California and Arizona, but they can be grown in Arkansas as well. Pomegranates prefer a semi-arid, mild-temperate to subtropical climate and are naturally adapted to regions with cool winters and hot summers. A humid climate can adversely affect the formation of fruit. It is not as reliably winter-hardy in the northern tier of the state as it can be severely injured by temperatures below 12 degrees, unless you are growing the more cold-tolerant varieties.

For years, the pomegranate plant was an old-fashioned shrub grown as an ornamental deciduous shrub with multiple stems producing showy orange-red blooms in late spring through summer. Many set small fruit, but with our humid summers, rarely did we see great fruit production. Today, a new series of Russian pomegranates have shown good results with fruiting and winter hardiness. They need full sun and a well-drained soil. 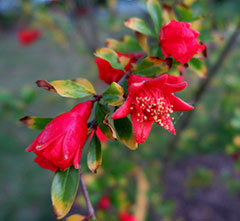 Pomegranates flower on new growth, much like a fig, so if any pruning is needed, it should be done before new growth begins in late February to early March. The fruit is produced on short spurs found on two- to three-year-old stems. Light annual pruning will encourage new fruiting spurs to develop, but avoid heavy pruning, which can reduce fruiting. The plants are often grown as a large bush instead of a tree, typically growing about 12 to 16 feet tall and almost that big around. There are dwarf varieties and ornamental ones as well.

Although pomegranate plants are self-fruitful, you often get better fruit set if you have more than one plant. The pomegranate may begin to bear a year after planting, but two to three years is more common. The pretty orange blossoms typically appear in late April and May, and can sporadically bloom into summer. There are two types of blooms: hermaphroditic and male. The hermaphroditic fruit-bearing flowers can be identified by their fuller, more rounded base, which appears somewhat peanut or bell-shaped. The male, or non-fruit-bearing flowers will be more narrow and vase-shaped. 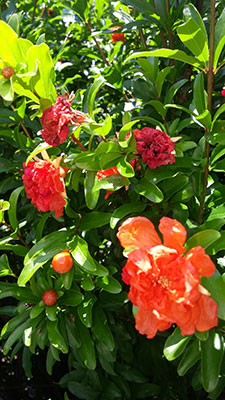 To increase the odds of setting fruit, plant two or more pomegranate plants for cross-pollination.

Under suitable conditions the fruit should mature five to seven months after bloom. The most common problem in the South with pomegranates is their failure to set fruit. Inadequate sunlight, high humidity and lack of pollination are the most common reasons that pomegranates do not set fruit. To increase the odds of setting fruit, plant two or more pomegranate plants for cross-pollination.

Pomegranates need a well-drained soil and full sunlight. Although they are drought-tolerant once established, if you want good fruiting you need to irrigate. ”Wonderful” and “Granada” are the most common varieties you will find in local nurseries, but the Russian varieties are the most cold-tolerant and include: “Afganski,” “Salavatski,” and “Surh-Anor.”

Pomegranate fruits are actually berries filled with hundreds of seeds ranging in color from white to dark red, depending on the cultivar. The edible portion of the fruit, called an aril, is composed of a seed surrounded by juicy pigments. There are hundreds of arils in each pomegranate fruit. The seeds are either soft or hard, depending on the cultivar. Many grocery stores sell the whole fruits when in season, or just the arils. The arils are good just eaten alone but can be tossed in salads or in a variety of dishes. The juice is also highly prized. 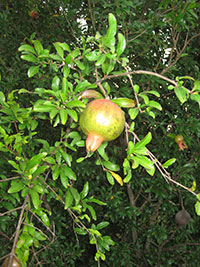 The internet is full of videos showing you how to peel and remove the arils.

Pomegranates have an excellent flavor, but they can be a bit messy to eat, and the juice can readily stain your clothing. The internet is full of videos showing how to peel and remove the arils. I usually cut them in half and put them in a bowl of water, then work with my fingers to remove the arils. The arils sink, and the extra pulp and peel float to the top. I skim off the debris, then drain the arils and eat.