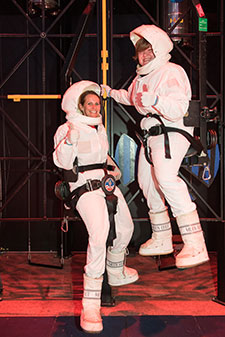 Mindy Bissett (left) and her teammate Miriam Harms of Geneva, N. Y., geared up in spacesuits for tasks during their simulated Mars mission.

Every teacher works hard getting ready for the new school year, but Mindy Bissett’s preparations this summer were quite literally astronomical.

Bissett, a Gifted and Talented (GT) teacher whose main school is Seventh Street Elementary in North Little Rock, was the lone Arkansas educator selected to attend the 2017 Honeywell Educators at Space Academy (HESA) at the U.S. Space & Rocket Center’s Space Academy in Huntsville, Alabama. Every year, Honeywell brings 200 middle school math and science teachers from all over the world together for an all-expense paid week of professional development in science, technology, engineering and math (STEM) education.

“Basically, it’s Teacher Space Camp,” Bissett summarized. “And it was the single most life-changing professional development opportunity I’ve ever had — definitely the most fun.”

Bissett works with students in kindergarten through fifth grades. “Besides GT, I also do a lot of STEM, advanced math, computer science and coding with my kids because that is where the future is, where the jobs are,” she said. “I really try to inspire my little ones to grasp those computer science concepts and love coding.” 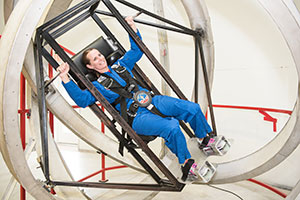 Mindy Bissett, spinning every direction in the Multi-Axis trainer, which simulates the disorientation astronauts feel in a tumble spin during reentry into the Earth’s atmosphere.

This year’s camp included educators from 45 states and 33 countries. The week’s 45 hours of classroom and laboratory activities included astronaut-style exercises such as high-performance jet simulation, scenario-based space missions, coding challenges, land and water survival training and interactive flight dynamics programs. Yet, unlike the normal Space Camp curricula for kids and families, all activities were designed specifically for middle school STEM educators, with collaborative teams exchanging ideas, lesson plans and materials to use in their classrooms back home.

Bissett’s 16-member team included teachers from five countries. The team’s simulated Mars mission was one of her highlights. “It was so fun,” she remembered. “Once we got onto the surface of Mars, I had to install a solar panel to power the habitat. It was so cool, because it was as real as it gets, experiencing microgravity in a spacesuit and moon boots. It wasn’t at all physically challenging, except that we were laughing so hard.” 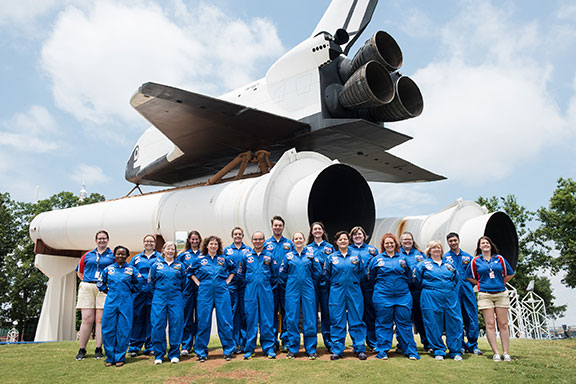 Mindy Bissett, third from left in back row, posed with her 16-member multi-national team and instructors in front of the Space Shuttle Orbiter Pathfinder during the 2017 Honeywell Educators at Space Academy in Huntsville, Ala.

Energetic, relentlessly positive and brimming with enthusiasm for her experience and new ideas for her students, Bissett clearly loves her work. In addition to the “loads” of other Space Camp swag included for participants, she got to keep her personalized flight suit, which she wore for students on the first day of class to get them excited about what lies ahead.

Just a few of the Space Camp-inspired projects she is planning for the school year are:

Another idea she got and learned how to do at Space Camp: launching a weather balloon. “I knew about weather balloons, but didn’t know that was something I could do with students myself!” she said, clearly excited. “Basically, you get a weather balloon, attach a GoPro to it, and you send it up into those near-space altitudes, then it will come back down. You get all these breathtaking videos and pictures of the sphere of the earth from outer space! It just sounds so cool to have the kids research and own that learning and take part in every part of the launch process.” 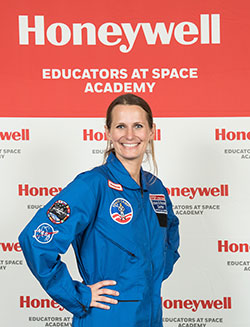 Besides her many classroom endeavors and her hopes to share her experience with other Arkansas educators, Bissett has one big goal. “I’d love to be able to take some kids to Space Camp from Seventh Street Elementary,” she said, explaining that at her school 99 percent of students qualify for free or reduced lunches. “I don’t know if we can do it, but I know that if we don’t try at school, Space Camp’s something that would never in their lives happen. But if we can fundraise, and we can get some support from people in the community, maybe we can make it happen for these kids.”

Camp’s long over, but the experience continues; Bissett has stayed in touch with more than 50 of her classmates, as they still share resources, support and ideas. “Honeywell has put together such an inspiring program,” Bissett said, describing how grateful and humbled she is to have qualified. “I hope it’s something many more Arkansas teachers have a chance to experience. It’s just incredible.”

Applications for the 2018 HESA are accepted Sept. 5 – Nov. 14. For complete information about HESA and an application visit: educators.honeywell.com.