Bacon is back at Dickey-Stephens Park in North Little Rock. So are barbecue sliders at Arvest Ballpark in Springdale.

Arkansas Travelers fans enjoy seating with or without chairs on the grass near Dickey-Stephens Park’s scoreboard.

season. Fans of the Arkansas Travelers and the Northwest Arkansas Naturals once again can “root, root, root” for the home team — easing the empty feeling left when the pandemic forced 2020’s nationwide canceling of minor-league play.

“The hardest part of the closed park last season was not being able to welcome all our regular fans and the families that enjoy our games,” says Rusty Meeks, executive vice president/CEO of the Travelers. He sees this year at Dickey-Stephens as a family reunion.

“Having baseball back at Arvest Ballpark is a combination of relief and joy,” says Justin Cole, vice president/general manager of the Naturals. “Seeing fans come through the gates is really rewarding. Last year was a bit surreal, having summer weekends go by without opening our gates.”

Fans may not notice or care, but the Travelers and the Naturals are playing in a renamed league with two added teams this year. What had been the Texas League is now called the Double AA Central. The two new teams, making a total of 10, are the San Antonio Missions and the Wichita Wind Surge. The 120-game season continues through Sept. 19. 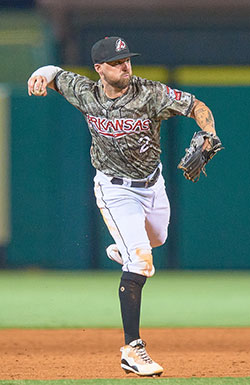 A prime incentive for taking in a Travelers or Naturals game is reasonable ticket prices. Meeks says: “I always like to remind families how affordable our games have become. We have tickets for as little as $6.”

Those $6 tickets give Travelers fans access to the popular grass berm above the outfield wall or to the beer garden down the right-field line. Box seats sell for $12, with reserved seats going for $8. Among special deals is the Dog Days of Summer promotion each Wednesday, lowering the price of a berm ticket to $3 for fans who bring their canine pets.

Ticket prices for Naturals games start at $8.75 for grass seating on the berm. Reserved- and box-seat prices go from $9.75-$14.75, with discounts including $1 off for buying before day of game.

Anyone going to a game at either ballpark should be alert to one new restriction, stemming from security concerns: Only clear plastic bags of a limited size are allowed through the gates, along with small clutch purses no bigger than 4.5 by 6.5 inches. Both parks give out free transparent bags.

Fans who have been startled or even appalled by the high prices of concessions at major-league parks in St. Louis, Dallas and elsewhere may be pleased by the lower cost of food and beverages at Dickey-Stephens and Arvest. 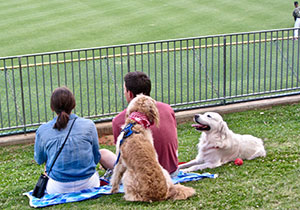 Fans watch the baseball action with their pets at canine-friendly Dickey-Stephens Park.

while barbecue sliders are $1.50 apiece on Wednesdays. At Dickey-Stephens Park, top bargains include $1 ice cream on Tuesdays and $1 hot dogs on Wednesdays.

Cole says, “For all pricing of concessions, we try each year to uphold as much value as we can.” Among fan favorites at Northwest Arkansas games, he adds, “are our barbecue nachos. They may be a bit messy, but fans go for that mix of flavors and textures.”

For Travelers games, Meeks cites cheesesteaks and bologna sandwiches among the most popular fare, “along with our bacon, available down the third-base line.” The bacon stand purveys BLT sandwiches and the Cup o’ Bacon. Fans can add more bacon at $1 per strip. A kiosk nearer to home plate sells deep-fried peanut butter and jelly pies. Hot dogs and peanuts remain in favor at both parks.

The Travelers boast a storied history going back to 1895. Serious fans of what once ranked as “Our National 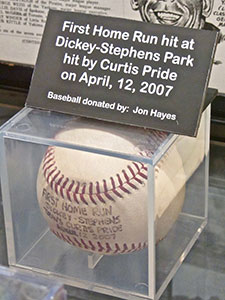 Pastime” can explore that past at no extra charge during Dickey-Stephens games in the Travelers Museum. They’ll learn that the first home run hit when the park opened in 2007 was powered by a rarity in professional sports — a player who happened to be deaf, Curtis Pride.

The Naturals came into being in 2008, when Arvest Ballpark was completed to house a Texas League team moved from Wichita. In retrospect, it was a relief that fans chose that nickname in a vote that came close to picking “Thunder Chickens” instead. There’s no museum yet, but the success of Northwest Arkansas teams over a dozen seasons is saluted with a Hall of Fame wall on the concourse.

When Pride hit the new North Little Rock park’s first homer in 2007, he was 38 years old and at career’s end in his 22nd professional season.
That is extremely atypical of Travelers’ and Naturals’ players. They are normally aspirants in their early 20s, hoping to make the majors and the multimillions of dollars paid to veteran big-leaguers. 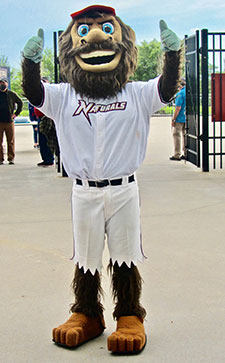 Strike the Sasquatch, mascot of the Naturals, greets fans arriving at Arvest Ballpark in Springdale.

big leagues — or failing as prospects. That presents a challenge in promoting any year’s star players, as Cole explains: “The nature of the minor league doesn’t allow fans to get too connected to a specific player, as his goal is to move up and make the big leagues. So, we focus a lot of time on the total ballpark experience beyond the action on the field.”

Between-innings stunts that bring younger competitors onto the field are one favorite. As Meeks tells it, “Fans at Dickey-Stephens really love the contest where two competitors put their heads on top of a vertical 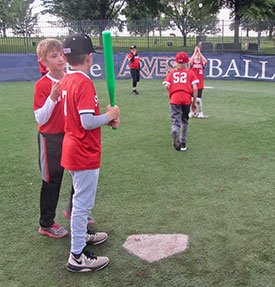 Little Arvest Ballpark, beyond the outfield fence, is open to youngsters for throwing and batting during Naturals’ games.

baseball bat and twirl around until they get really dizzy. Then they try to run to a finish line. Usually, one or both of them fall down. It’s good clean fun.”

Both teams continue to add attractions, mostly beyond the outfield berms, where boys and girls can take a break from watching action on the diamond. Meeks describes it as “a very important part of the whole ballpark experience.”

Cole says the non-baseball activities “are something we definitely take into account. It obviously helps if you love baseball. But even if it is not your favorite sport, we hope there are enough other options that fans of all ages can still have an enjoyable time.”

More information on the Arkansas Travelers and the Northwest Arkansas Naturals is available by visiting milb.com.