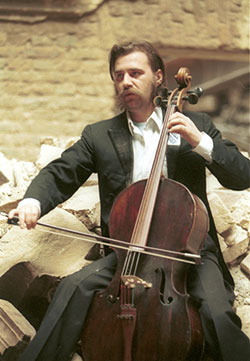 A few years ago, I met a young man who survived that siege as a young child. When asked if he remembered the end of the war, he replied solemnly, “I remember it clearly, because it was the first day that my mother allowed me to walk outside of our house standing upright,” he said. “Until that day, I had to crouch down and run between houses to avoid sniper fire.”

What a childhood he must have endured!

During the worst days of the fighting, with shelling all around, one man, Vedran Smailovic, protested by playing his cello, at one point playing Albinoni’s Adagio in G minor in a public square for 22 consecutive days to protest the deaths of 22 civilians in that same square by a mortar round.

That’s right, in the midst of war, one man staged a protest of beauty, his personal protest of peace.

In the United States of America today we face difficult issues and much division among our citizens. Things are challenging, and yet, can they begin to compare to a civil war with a four-year siege?

What if we decided to protest the hatred in our neighborhood, not with more hatred, but with beauty and peace? It is within our power to do this. Imagine the impact it would have if thousands of us, if millions of us took up the cause of beauty in the midst of conflict.

This holiday season, I pray that many of us will say, “Let me be a cellist making music within my war, whatever that war may be.”

May the beauty within you be a witness of peace to this struggling world.