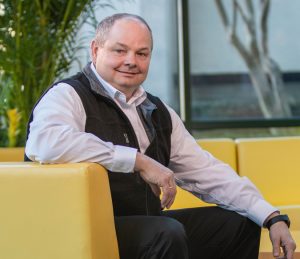 I get a lot of feedback on this column in Arkansas Living, and one of the articles that generated the most feedback is “Vitamin Bee.” I guess a story about a man stranded with a flat tire and a truck full of hot, angry bees gives meaning to the phrase, “It could always be worse.” Given that our cover story this month is about the Arkansas State Spelling Bee, it seems appropriate to provide an update on my beekeeping efforts. However, I would be remiss if started talking about honeybees before congratulating Miss Aditi Shashidhara of Benton County for her impressive win at this year’s Bee.

In 2017, the United Nations General Assembly declared May 20 as World Bee Day in honor of Anton Jansa, who is considered the father of modern beekeeping. Jansa was born in 1734 in modern-day Slovenia, and in 1769, the Empress Maria Theresa named him the first official teacher of apiculture at the Habsburg Court in Vienna. World Bee Day was established to draw attention to preserving bees and pollinators due to declining bee populations, which is concerning given the critical role that bees play in pollinating plants that are critical to our food supply. Albert Einstein once said, “If bees disappear, humans would have four years to live.”

Now that I have gotten the educational information out of the way, it’s time to provide the entertaining portion of this month’s article. I have had a couple of additional misadventures in beekeeping since last year, hence the title of this article: “Bee Careful.”

My first misadventure proves that you should always double-check your gear before you go into battle. My wife, Tracy, bought me a new beekeeping jacket for my birthday last year. My old bee suit was a very simple pullover shirt and hood. The upgraded suit, featuring much thicker material, is jacket-style with three zippers: one up the front, others on the left and right sides of the neck to close in the hood with a Velcro tab to close the gap between all three zippers. 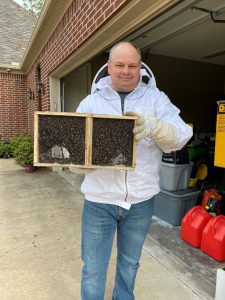 I can positively affirm the Velcro tab is an essential part of the bee suit. I know this because the first time I used the new bee suit, I forgot to put it in place. I was proudly wearing my new bee suit during a routine hive inspection when I thought I saw a bee on the inside of the mesh facepiece. The mesh is so close to your face that sometimes it is hard to tell if the bee is on the inside or the outside. However, if you put the suit on right, it is a good assumption it is on the outside, and things are fine. Bad assumption in my case. It wasn’t long after that I felt a sting on my head, then another one in my ear.

Another interesting bee fact is that when a honeybee stings you it releases a danger pheromone. It is like saying to 50,000 of their friends, “Hey, there is a bad guy here! Let’s all sting him!” After the third and fourth sting, I realized something was wrong, and I wasn’t going to figure it out with hundreds of bees flying around me, so I calmly started to walk away from the hive. By the fifth and sixth stings, I lost my cool demeanor and started a slow jog while swatting at my head. And by the seventh, eighth, ninth and 10th stings, I decided that the bee suit was a liability, so I began stripping it off at a full sprint. The stinging continued as the bees were now inside my shirt, so I started peeling that off too while running as fast as an out-of-shape 53-year-old can run.

From their vantage point inside the house, my family saw what looked like an angry circus bear running wild in the backyard, swatting at its head. They quickly sprang into action, and my son-in-law, Jacob Orbin, grabbed a hose and sprayed a mist into the air so I could run under it to keep the bees off. I went in the house, and my wife pulled more than 50 stingers out of me and gave me a healthy dose of Benadryl. I used that experience to confirm that I am not highly allergic to bees and that I don’t need to worry about just a few bee stings. 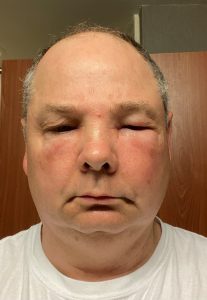 Buddy Hasten has learned that not carefully suiting up can lead to swelling up.

This was another bad assumption. A couple of weeks ago, I went out to do a spring hive inspection. I had to travel to Fayetteville that afternoon, so I rushed home from church and immediately grabbed my bee suit and headed toward my hives. I donned the suit and dutifully checked the three zippers and Velcro tab. While doing the hive inspection, I felt a sting on the bridge of my nose and then another on the side of my face. I thought, “Oh no, here we go again,” but then the stinging stopped. All I can figure is that a couple of bees got in the suit when I was putting it on near the hive. Based on my 50-plus stinger experience, I shrugged it off, completed my inspection, grabbed my suitcase and headed for Fayetteville. That night at dinner, my board members noted that my face looked slightly swollen. I told them I had gotten stung a couple of times, but no big deal. When I woke the next morning, my entire face was swollen with one eye swollen shut and the other nearly so. Suffice it to say that I looked like Rocky Balboa after going 15 rounds with Apollo Creed. I got dressed and headed to the front desk, and thankfully, the night manager was able to get me some Benadryl from the hotel market. Based on the looks on the board members faces when they saw me, I could tell that my face hurt them more than it hurt me.

I continue to live and learn, as I lost one of my hives over the winter, and I will once again be picking up a Nuc colony of bees from Bemis Honey Bee Farm in Little Rock in a couple weeks. This year, I will definitely look to connect with the Benton Beekeepers Club. And I will also try to “Bee Careful.”