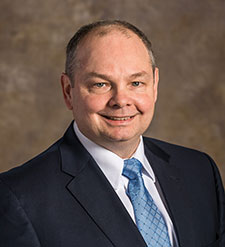 Many of you are familiar with the song “The Night the Lights Went Out in Georgia,” but I wonder how many of you are familiar with a story where the lights actually went out in California in 2020. On Aug. 14, more than 2 million Californians were plunged into the dark when the sun set, the solar energy went offline, and the grid didn’t have enough generation resources to remain stable. Electric shortages continued through Aug. 20 and recurred in September and October. The California Independent System Operator (CAISO) had to declare a state of emergency and ask consumers to conserve energy — more than a dozen times — just to keep the power grid stable.

If this had happened in Arkansas in August, we would have come home from work and been required to turn off the air conditioner and avoid cooking dinner, washing clothes or dishes, or any of the other things we all do after work. Can you imagine being forced to do this during a heat wave, in the middle of a pandemic, because the state didn’t have enough power to serve our needs? 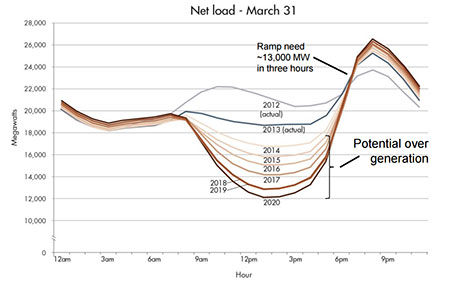 The California Independent System Operator (CAISO) created this graphic of a “Duck Curve” that shows how the generation demand or load varied on March 31 from 2012 through 2020.

for years. It’s called the “California Duck Curve” and is so named because a graph of the power usage is shaped like a duck. It’s what happens when solar energy is produced during the day but drops offline at sunset. Then the electric power grid has to respond, without notice, by bringing other resources online quickly to keep the lights on. The loss of the solar power creates a massive spike in electrical demand on the power grid known as “the ramp.” The taller and steeper this ramp, the more operational risk to the power grid. On Aug. 14, California lost control of the ramp, causing extensive power outages. Stability of the power grid was touch-and-go for the next week and required Californians to conserve energy to prevent additional rolling blackouts — a result no one wants.

How does this happen in one of the most technologically advanced states in the country, in the year 2020? It happens when the people who set energy policy are not the same people who have to answer the call when the grid goes down, and they forget to invite the engineers and others who operate the grid to the discussion. Energy from renewable resources is a great thing — but renewable sources of power have different characteristics and should be handled differently, and with careful planning and integration. California has taken an aggressive renewable energy policy stance, but those energy policies have left large gaps in California’s power supply capabilities and its ability to meet consumer demand.  I think Rachel Michelin, president of the California Retailers’ Association, says it best: “Last year the Independent System Operator warned that there would be potential resource shortages starting in 2020. No one listened and now residents and businesses are paying the price.”

I am often asked if Arkansas’ electric cooperatives are for or against solar energy. To be clear, we support solar energy in conjunction with good engineering and wherever it makes sense. However, we do not support solar energy when its use ignores physics and supplants sound engineering principles with politics that drive environmental policies; that’s when things like the recent California power outages result. While California may be touted as a model of modernization and renewable energy, in reality, California is the nation’s largest importer of energy, and its energy policies have resulted in a costly and unreliable electric system that delivers blackouts and brownouts.

As if there needs to be any more proof of politics getting ahead of engineering science, on Sept. 23, immediately after the rolling blackouts and during electric energy shortage alerts, California Gov. Gavin Newsom signed an executive order that mandates, by 2035, all new cars and passenger trucks sold in California to be zero-emission (electric) vehicles. But those electric vehicles will require the power grid to operate, which means even more stress will be put on the power grid in a state that can’t even keep the lights on now. I am thinking they may need some ruby slippers for this proposal to succeed. 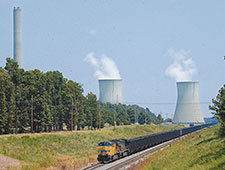 The White Bluff Steam Electric Station at Redfield is a major coal-based power plant now providing Arkansas’ electric co-ops with part of their baseload or 24/7 generation. It is set to be phased out by the end of the decade.

Why all this talk about California when we live in the great state of Arkansas? If cost is of no concern and reliability is of no consequence, then aggressive, non-engineering-based energy policies can possibly work (the average cost of electricity in California is about 20 cents per kilowatt-hour, twice as much as the 10 cents per kWh rate in Arkansas). California is worth our attention because I see similar clouds on our horizon. We have large, reliable fossil fuel power plants that have announced closure because of environmental lawsuits, yet nothing but intermittent renewable resources are in the plans to replace them.

Currently, Arkansas has a super aggressive state law (Act 464 of 2019) that incentivizes solar power without regard to reliability and cost, presumably as a means to “catch up” with California. If we’re not careful, California is a postcard from our future: If renewable energy is so cheap and plentiful, then why does California’s power grid cost twice as much to be less reliable than ours?

There is a draft piece of state legislation being developed that would change Act 464 to better align solar incentives with fair cost and reliability for Arkansans. We are supporting those changes to Act 464 in the next legislative session because we support solar technology, but we also want to avoid a “Duck Curve” in Arkansas. The only ducks I want to see in Arkansas are the kind that bring hunters, tourism and economic development to our state.

Every day that I walk into my office — or work virtually during this pandemic — I am focused on the affordability and reliability of our cooperative power supply. I am hopeful that this nation has learned a little something from the California blackouts and that engineers will be at the table as America transitions toward an energy policy that can decarbonize the electric grid.