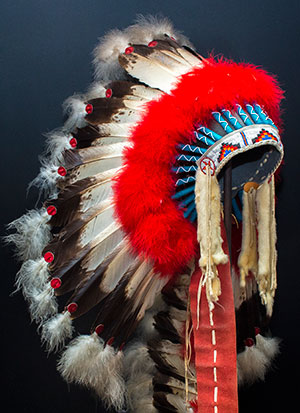 One of the various headdresses on display at the Museum of Native American History (MONAH) in Bentonville. photo courtesy of MONAH

Upon opening the tall front doors, every guest entering the Museum of Native American History (MONAH) in Bentonville is welcomed with a loud, bellowing roar. The impressive roar comes from a recording approximating what a woolly mammoth sounded like, and it accompanies the authentic, 12,000-year-old woolly mammoth skeleton standing beside the entrance.

This fantastic beast, along with the large and colorful teepee outside on the grounds, are the first clues visitors get that they’re about to encounter art, history and artifacts of times very different from ours today. The effect is that when the doors open and visitors step inside, the other sounds visitors tend to hear are each other saying, “Oh, wow!” 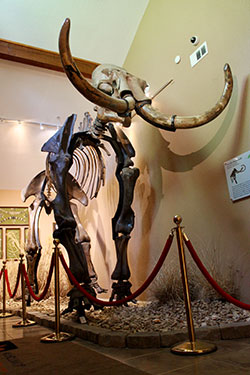 The 12,000-year-old woolly mammoth skeleton, as with everything else at MONAH, is authentic, not a replica.

There are usually many more cries of “Wow!” in the tours that follow, says Charlotte Buchanan-Yale, executive director for the privately owned, nonprofit museum. As visitors make their way through five galleries of amazing tools, art and artifacts, the genius of cultures and individual craftspeople gone for hundreds or thousands of years is hard to deny.

Buchanan-Yale says one of the things almost every visitor is surprised to learn is the scope of the museum’s collection, which has more than 8,000 original artifacts from across the Americas.

“People expect us to have collections of regional Native American art, which we do,” she says. “What they don’t realize is that we aren’t just collecting local artifacts — our collection tells the stories of all Native Americans in North, Central and South America.”

Visitors walk through the 14,000-square-foot museum exhibits organized chronologically through archaeological periods dating back as far as 15,000 B.C. in pre-Columbian America, all the way through Native American culture in the centuries after Europeans first made contact. Halls include areas for the Paleo, Archaic, Woodland, Mississippian and Historic periods of Native American culture. 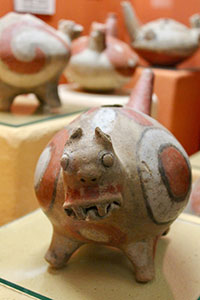 This dog effigy teapot was made by Quapaw Indians in Phillips County between 1500-1800 A.D.

Although MONAH displays pieces from tribes on two continents, Arkansans can see many pieces that originated right here. The artifacts found in Arkansas, mostly pottery made by tribes such as the Quapaw and Caddo, are helpfully mapped to the county and approximate date they were created. It gives a certain sense of pride to see their art evenly juxtaposed with elaborate carvings from places as far as Peru or Inuit tribes in the Arctic. Arkansans measured up, even thousands of years ago.

The bulk of the museum’s artifacts — each of which is 100 percent authentic, with no replicas displayed — comes from museum founder and chairman David Bogle, a Bentonville native with Cherokee ancestry and a passion for traveling and collecting. Bogle’s own exposure to Native American history started as a Boy Scout, but after acquiring his first arrowhead collection as an adult, his curiosity caught fire. His personal world-class collection includes some of the most famous Native American artifacts in existence. 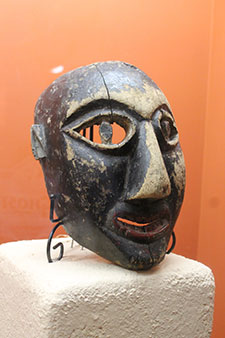 This mask is a Cherokee wooden “booger mask” carved in the 18th century and abandoned by its Cherokee owner in 1838 along the trail of Tears in Tennessee.

Bogle’s collection soon outgrew his house, so in 2006 he went about opening the museum in a small downtown Bentonville location. In 2008, the museum moved and reopened in its current, much larger facility on SW O Street in Bentonville, not far from the Walmart campus. Since then, his collection and the artifacts the museum has acquired and had donated, managed by Bogle and curator Matt Rowe, have only grown more impressive.

Some of the museum’s artifacts are virtual superstars in the Native American collecting world. On display are the oldest bow and arrow set ever found in the Americas, the largest collection of prehistoric stone tool types, the most Mississippian head pots ever displayed together and the thinnest stone tool ever found in the Americas, called the Sweetwater Biface, dated approximately 1300-1500 A.D. This tool is in a special case where it rotates on its end so visitors can see first-hand how incredibly thin it is.

The thinnest stone tool ever found in the Americas rotates in its display case.

the Sweetwater Biface for themselves. Found by a Sweetwater, Tex., resident in 1986 during a rattlesnake hunt — incredibly, it was just lying on the ground undamaged — the flint blade is 9 7/16 inches long, 3 3/8 inches wide, and only 3/16 of an inch thick. It is 18 times wider than it is thick; the fact that it remains functional and intact after all this time, she says, is a testament to the craftsmanship of its maker. 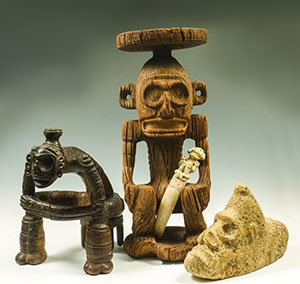 This year, visitors will be able to view a special collection on loan from another collector, Jack Hart, a native New Englander now living in Colombia. The new exhibit, called “Coming to America — The Taino,” features artifacts from the Native Americans who first greeted Christopher Columbus when he landed in what is now the Dominican Republic. Within 60 years of the Spanish colonists’ arrival, the Taino people ceased to exist, but Hart’s collection of their artifacts is now a world treasure.

Hart told MONAH in an interview about the exhibit that the Taino people were skilled weavers, carvers and potters whose artifacts, collected here into the Essex Collection, often depict people and animals in sculptures and objects used in elaborate rituals to communicate with their deities and ancestral spirits. MONAH is the first museum to display this entire collection for the public. 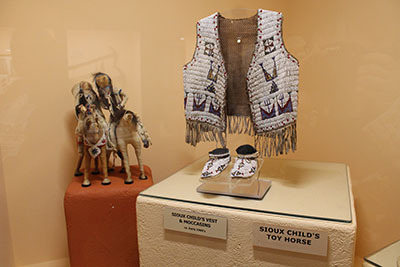 Children’s relics from the Sioux Natio; a toy horse and a child’s vest and moccasin’s.

A lot of visitors, Buchanan-Yale says, come to learn more about their own ancestry. Being so close to Oklahoma, formerly Indian Territory, there is a higher percentage of people with Native American heritage living locally than in some parts of the country, and genealogy research is growing more popular. MONAH’s contribution is being able to show people concrete evidence of the cultures’ skills and artistry.

On the day of our visit, we met “12-and-a-half”-year-old Maya Brand of Springdale, who was at the museum’s well-stocked gift shop trying on genuine leather Native 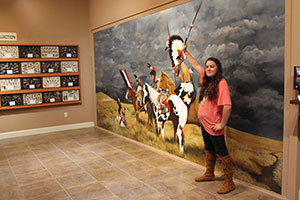 American boots that laced up to her knees. “It’s pretty cool,” she said of the museum, which she had visited once before, adding, “And I recently found out I’m part Cherokee, so that makes it even more cool seeing everything that relates to them.”

Buchanan-Yale says that educationally, the museum hopes to inspire visitors, especially the many school groups that come through its halls, to “go home and dig a little deeper.”

“We try to entice them with the stories and images, so they want to discover the rest of the story. Our goal is for students to learn just enough here that they can go home and research on their computers or in their libraries more about these cultures and how they lived,” Buchanan-Yale says. The staff also works with teachers on lesson plans and follow-up projects students can pursue. She says MONAH also works closely with the local community on programming and events, tying into happenings such as film festivals and exhibits at Crystal Bridges Museum of American Art, also in Bentonville. 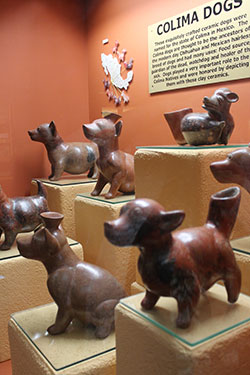 The ceramics display of Mexican Colima dogs, the predecessor to the modern chihuahua, is a favorite with the dog-loving visitors.

While the growing collection at MONAH encompasses dozens of ancient peoples, many of them no longer in existence, one through-line is clear in every part of the museum. Buchanan-Yale says that for as long as people have been in the Americas, they have been creative in expressing their cultures, building tools to make their lives simpler and art to make their lives richer.

“As different as we are today, we still do these things in our lives, in our own creative ways,” she says. “There is so much to explore here, I learn something new every single day. Each piece brings history alive. These people live on through the things they left us to discover.”

To learn more about Arkansas’ Native American history, visit www.arkansas.com/native-american where you can download a free copy of “Native American Heritage in Arkansas: History Happened Here.” 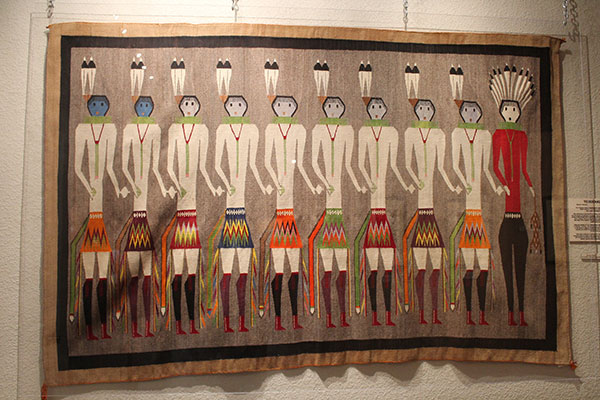 Navjo weaving depicting the Yeibichai Dance, performed at the conclusion of the nine-day Navajo Night Ceremony.

Free admission to the public. Self-guided audio tours are available.

School and tour groups are welcome to make reservations.