For gardeners, deer can wreak havoc on the hard work and money devoted to beautifying their landscapes 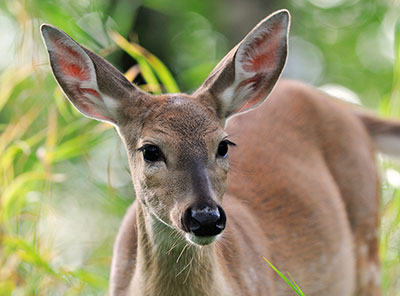 Damage from deer can be reduced by choosing less palatable plants.

and providing fresh vegetables for the dinner table. Deer are encroaching in city landscapes and tend to get more daring each season, sometimes even venturing up onto a deck to eat the plants in containers. When it comes to deer control, there is no hard and fast answer that will work in every situation.

White-tailed deer are herbivores, and they are not too picky about what they eat. Their stomachs allow them to digest a varied diet, including leaves, twigs, fruits, nuts, grass, corn, alfalfa, and even lichens and other fungi.

The comeback of the white-tailed deer is one of the most successful conservation initiatives in Arkansas history. By the early 1900s, white-tailed deer numbers were declining throughout the state. Deer management in Arkansas began in 1916 when a legislative act established a hunting season for deer, turkey and bear. Today’s deer herd is estimated to be near 1 million animals and growing. 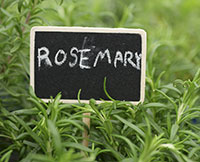 Deer typically will not eat strongly scented herbs, like rosemary.

With so many deer and an ever-increasing melding of the urban/rural divide, deer are becoming a gardener’s nightmare. Damage from deer can be reduced by choosing less palatable plants, using repellents and installing fencing. First and foremost, consider planting deer-resistant plants — those not as attractive to the deer. Their diet is usually influenced by plant qualities such as taste and digestibility. Deer prefer a bland diet. Unless they are in starvation conditions, they will pass by most aromatic plants and plants containing poisonous or irritating chemicals. However, when natural food sources run low, they will even eat plants on the deer-resistant list.

In general, deer typically avoid plants with strong scents like many herbs — rosemary, lavender, thyme and sage.They also don’t like fuzzy leaves such as lamb’s ear or mullein. Plants that are poisonous they leave alone, including daffodils, foxglove, monkshood, hellebores and poppies. If you are looking at shrubs that they typically avoid, plant barberry, boxwood, hollies, juniper, mahonia, cherry laurel, sumac, cotoneaster and witchhazel. 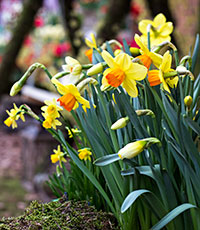 Daffodils are normally left alone by deer, but they love tulips.

Perennials they avoid include columbine, anemone, coreopsis, milkweed, monarda, peony, bleeding heart, catnip, goldenrod and salvia. Some annuals they tend to ignore include ageratum, begonia, dusty miller, larkspur, lantana, marigolds, nasturtium, snapdragon and zinnias. Most native plants generally aren’t as attractive to deer, but they won’t repel them from your garden.

Deer can be creatures of habit and what one will eat the other may not. Most deer tend to love hostas and daylilies, along with azaleas, hydrangeas and roses. If you love spring bulbs, plant daffodils, which they leave alone, but avoid tulips, which they love. They also can wipe out a planting of pansies and violas. Vegetable and fruit gardening can be a real challenge.

Deer fencing can make or break your harvest. It can be woven wire or plastic mesh, but must be 8- to 14-feet tall to be effective. An electric fence is also a good deterrent. There are now solar-powered electric fences available.

There are also numerous repellents on the market. Contact repellents usually have a bad smell. Rainfall washes them off, so they do need to be reapplied. If you are using commercial repellents, read and follow label directions, paying particular attention to edible plants.

Deer typically feed in the early morning hours or late afternoon, but with heavy populations some gardeners are seeing them at all hours. Their diet changes depending on the season and the habitat. They usually eat green plants in the spring and summer, changing to corn, acorns and other nuts in the fall, with twigs and buds of woody plants in the winter.