Unlike most dugouts that I experienced in many years of playing and coaching baseball, The Dugout in Texarkana is a well-lighted, sparkling-clean and lovingly decorated space. It’s a restaurant that you’ll want to add to your dining roster. 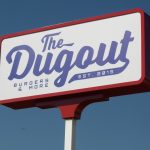 The Dugout opened in Texarkana in 2015.

In 2015, David and Nicole Oliver had been married for about a year when they decided to open The Dugout.

Oh, Nicole was also six-months pregnant. Fast-forward to 2021, and the couple’s family includes seven children, ranging from a 25-year-old to a spunky 5-year-old son. David and Nicole are a busy couple, as David also has a full-time job with another company. In addition to running the restaurant and participating in other community activities, The Olivers recently became foster parents for children in need. They know what it means to serve others. 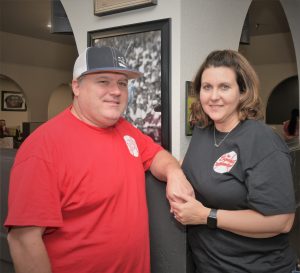 As owners of The Dugout, David and Nicole Oliver cover all the bases.

The Dugout’s exterior features a simple design, clean and crisp as a major league ballpark on opening day. The interior walls are adorned with a great collection of baseball memorabilia and jerseys from Texarkana area baseball players that made it to The Show, or major league level.

“When we were getting ready to open the restaurant, we knew that we wanted to offer the best food possible at the fairest price possible,” David said. “Our first menu was very simple with a few hamburger and hot dog options.” Today, The Dugout’s menu is a varied roster of great dining choices for its loyal fans. 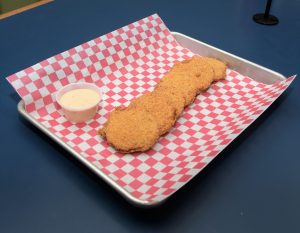 Fried Green Tomatoes are served with a side of “bang bang” sauce.

The first item I tried was a plate of hand-breaded, Fried Green Tomatoes, served piping hot with a side of yummy “bang bang” sauce. The Southern-style treats were the perfect lead-off for my Dugout experience. 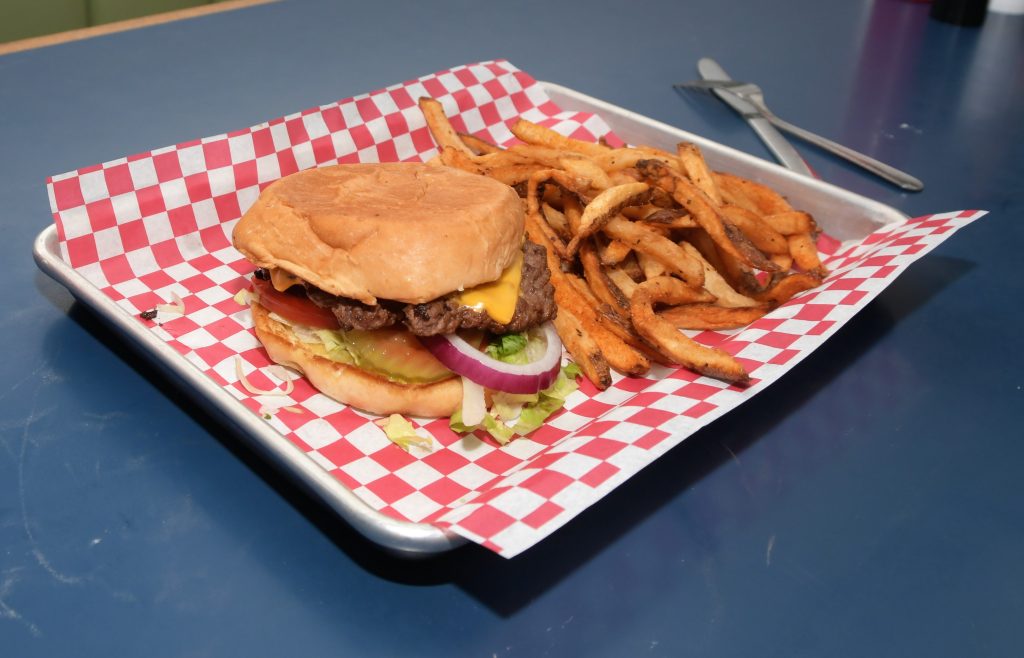 The Dugout’s burgers and hand-cut fries always knock it out of the park.

The Dugout serves only 100% certified Angus hamburgers of fresh, never frozen, beef with a choice of white, wheat or jalapeño-cheddar bun. There are several baseball-themed burger options, including the 643 Double Play, a magical combination of a blackened grilled beef patty, remoulade sauce, grilled onions and grilled mushrooms on a white bun. If you are feeling the need, there is the Double Header — a single hand-formed beef patty served between two grilled cheese sandwiches with bacon and cheddar cheese. David and Nicole served me a Build Your Roster burger, which included my choice of toppings. 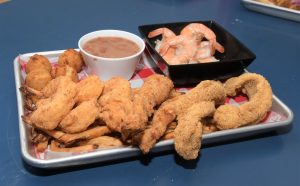 The Dugout steps up to the plate with catfish, frog legs, boiled shrimp and hush puppies.

Farm-raised, USDA-certified American catfish debuted at The Dugout a few years ago as a pinch hitter, and it has blossomed into an everyday crowd-pleaser. A few other food players have been added to support the hand-breaded catfish — fried shrimp, boiled shrimp, frog legs and hush puppies. These new menu items are a far cry from the frozen versions you have eaten. The fish menu options are so popular that The Dugout has a staff member dedicated solely to ensuring that the catfish and shrimp are prepared to perfection. 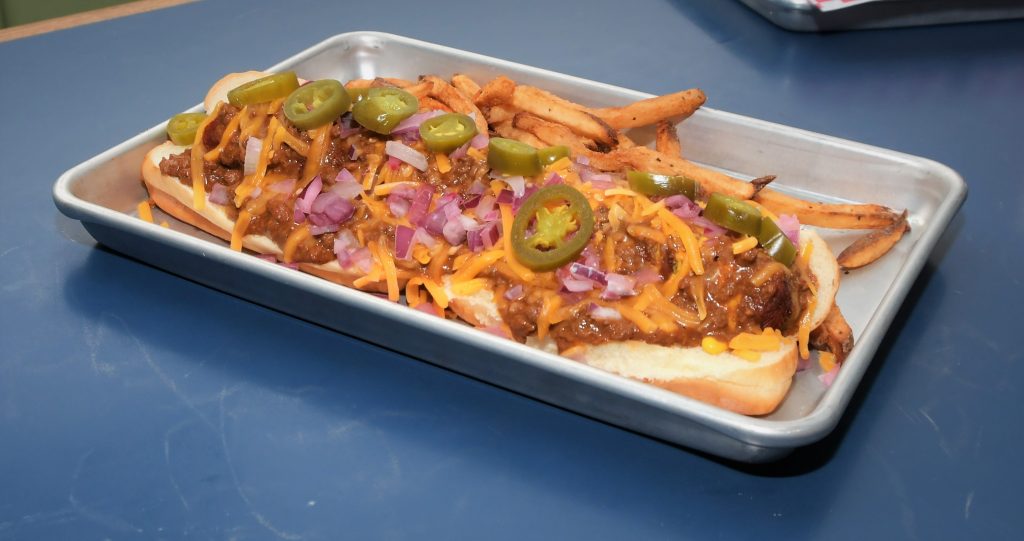 The Dugout fans rave about the chili dogs featuring plenty of palate-pleasing toppings. The Walk-off Home Run is a heavy hitter, an impressive foot-long hot dog wrapped in bacon and topped with tangy chili, shredded cheese, sliced jalapenos, chopped onions and mustard. As a worthy side for so many Dugout dishes, the hand-cut fries deserve an MVP designation.

Each guest receives a complimentary soft-serve vanilla ice cream cone. But homemade banana pudding and strawberry cheesecake have become game closers that are loved by The Dugout’s growing fanbase. 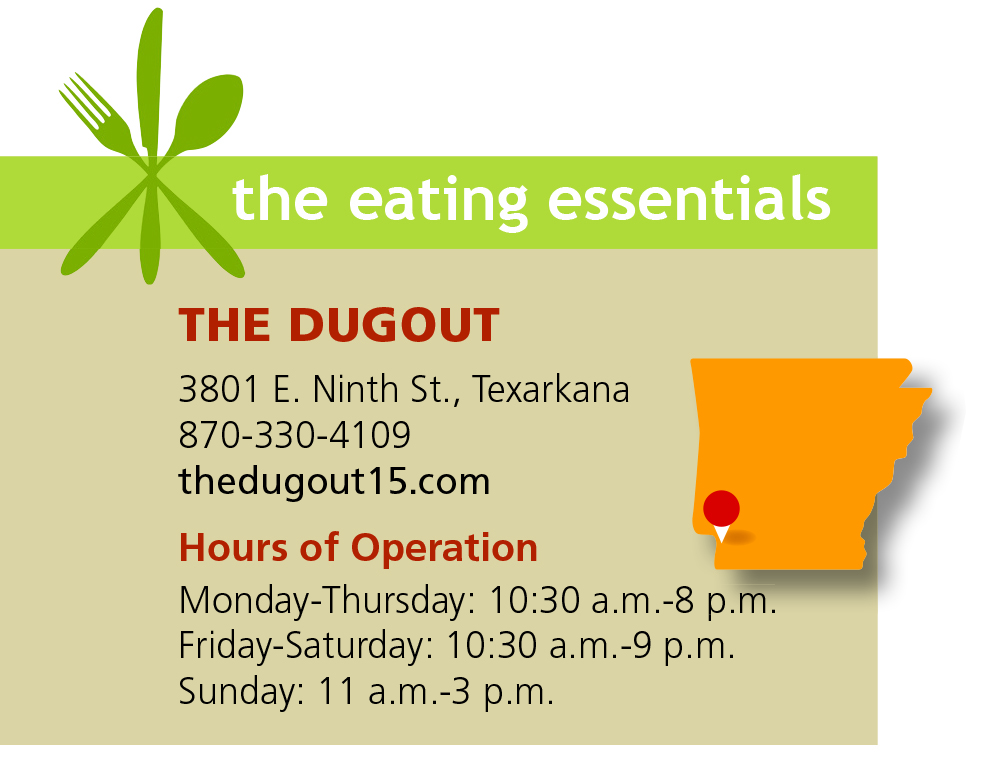