Torrential rains that fell across Oklahoma and Kansas in May led to catastrophic and record-setting flooding along the Arkansas River that extended into June.

It was clear that areas along the Arkansas River in Arkansas were in danger of flooding after residents were urged to evacuate on May 22 in Webbers Falls, Oklahoma, near the Arkansas border. The National Weather Service (NWS) said the river reached its second highest level on record at Muskogee, Oklahoma, that evening. The U.S. Army Corps of Engineers in Tulsa began releasing water at Keystone Dam at 250,000 cubic feet per second, more than double the flow of Niagara Falls as the “Arkansas River was about to go haywire,” the NWS said.

In terms of sheer, large-scale devastation, highest crest and loss of life, the Fort Smith area was hit the hardest 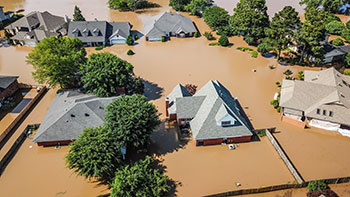 by the Arkansas River flooding. The river crested in Fort Smith at 40.79 feet on June 1, two and a half feet above the record set on April 16, 1945. One person, Charleston resident Tommy Adams, whose vehicle was submerged by floodwaters near Fort Chaffee, died. More than 500 homes were affected by flooding, and the losses to business, industry and agriculture in the area were still being calculated at press time. The Port of Fort Smith was submerged, with operations suspended for weeks.

Kendall Beam, director of Sebastian County Emergency Management, said the floods hit at a particularly hard time, days after the city was recovering from being hit with four EF1 tornadoes. The NWS had told him they were expecting a 35-foot flood, what Beam said would have been a “manageable” level.

“Then they called back and said they were expecting 42.5’ flooding,” he says. “That changed everything.”

For more than two weeks, much of Fort Smith, Arkansas’ second-largest city at 82,000, felt like an island. Because of flooding and fast water over the bridge approaches, officials closed three of the city’s primary access points: the bridges on Garrison Avenue (U.S. 64), Interstate 540 and Midland Avenue, effectively cutting off most traffic to and from the city for a number of days. The Garrison Avenue bridge, closed to all but pedestrian traffic, became a popular point for people to view the flooding first-hand.

The Arkansas River wraps around several edges of Fort Smith, which caused flood-related road closures on the Northside, Southside and Eastside areas. Some neighborhoods, especially in east Fort Smith, could only be accessed by boat. Some homes had more than 8 feet of water inside. Rogers Avenue, the city’s main thoroughfare, flooded for several blocks on the east side of town. Across the river, Van Buren was similarly hard-hit.

Rogers Avenue and Meandering Way in Fort Smith are flooded with water from the Arkansas River. photo by Austin Collins

Besides the level of the water, its speed was dangerously fast. A flow of 30,000 cubic feet per second (cfs) is normal. At 70,000 cfs a small craft advisory is issued. When the Arkansas River crested in Fort Smith on June 1, the water was flowing at 570,000 cfs. The NWS has said it is not expected to reach normal flow until sometime in July.

Beam said that Sebastian County used 177,000 sandbags, 1,500 tons of sand and 595 tons of crusher dust to protect the city. Countless volunteers and organizations pitched in to help during and after the flooding.

“The only saving grace was the water was rising slowly. That gave residents time to think about how to prepare,” he said. “I’m very proud of Sebastian County. The people here are resilient. They take care of each other, and they take care of their neighbors.”

The national U.S. Marshals Museum, currently under construction next to the Arkansas River in downtown Fort Smith, narrowly escaped the rising water. Claude Legris, director of the Fort Smith Advertising & Promotion Commission, said, “The museum architects recommended we build the museum to the 500-year flood level. We built it to the 500-year flood level, plus three feet. Those three feet made all the difference.”

The river at Fort Smith and Van Buren finally dipped below the flood stage on June 13. The recovery and clean-up will be long-term operations. A River Valley Flood Relief Center, providing food, water, cleaning supplies and other resources to flood victims, has been established. The United Way is spearheading much of the volunteer efforts across the city. Meanwhile, the Red Cross and FEMA have both been on the ground, doing house-to-house assessments and connecting people to emergency resources.

Beam said the agricultural losses will be steep. “Farmers had two weeks until they brought their crops in. Then it hit, and now they’re wiped out.”

Mayor George McGill told the Times Record newspaper, “(Residents) dealt with the worst of the worst, and now we’ll spend a little time giving thanks and prepare for the long cleanup ahead. Our city is going to respond and be restored to what she is, I have no doubt.” 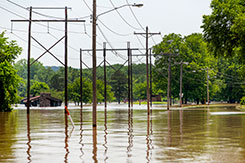 Most of the covered pavilions in Murray Park in Little Rock, along with most of the park itself and Rebsamen Park Road were underwater on May 31. photo by Karen E. Segrave

levels” were reached in areas along the river west of Little Rock from Van Buren to Toad Suck in Perry County. Homes and businesses in these areas were evacuated, and some levees were breached, including one in Yell County, the NWS said. In early June, the rising water had reached Pine Bluff.

On June 3, a flood warning was issued for Lake Conway as Palarm Creek, swollen with floodwaters, backed up into the lake, leading to evacuation of surrounding homes. Also near Conway, local leaders and residents became concerned about the possible failure of Lollie Levee on the Arkansas River, which could have had even more devastating impacts on Conway. But the levee held, prompting city leaders to give it a key to the city on June 10.

“We’re very proud of the Lollie Levee for holding strong,” said Bobby Kelly, spokesman for the city of Conway in a 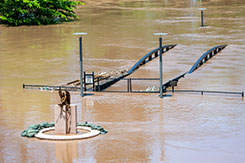 A statue and pedestrian walkway at the Clinton Presidential Center in Little Rock peek through the floodwaters. photo by Karen E. Segrave

Arkansas’ electric co-ops had four power plants, three of which are hydropower plants on the Arkansas River, that were affected by the flooding. Crews for Arkansas Electric Cooperative Corporation (AECC), the wholesale power supplier for Arkansas’ 17 electric distribution co-ops, began monitoring the situation after being warned of the impending rising water.

Water from the Arkansas River encroaches upon the Thomas B. Fitzhugh Generating Station at Ozark.

The Thomas B. Fitzhugh Generating Station at Ozark, located along the Arkansas River, went offline at the peak of flooding as a precautionary measure. Plant crews placed sandbags at the plant as forecasts for flooding continued to rise, said Rob Smith, AECC’s senior director of power production. The water flooded areas around the plant, but never got inside the natural gas-based generation station.

As the river levels rose, roads leading to the Whillock and Ellis plants were covered with water, requiring the

North Little Rock’s Riverfront Park, covered in water from the swollen Arkansas River, on May 31. photo by Karen E. Segrave

crews to use boats to reach them to keep diesel generators fueled, Smith said. The generators, which were needed because the plants had been de-energized as a safety precaution, powered pumps to keep the floodwaters from inundating the powerhouses.

On May 31, with floodwaters raging, Fletcher and his crew performed an even greater task when a leak was discovered at the Ellis plant. To repair the leak, a helicopter was secured to lower two plant employees — Mike Rofkahr, assistant plant manager at Fitzhugh, and Keith Hurt — onto the plant to do the necessary work.

“Jimmy’s team did what they needed to do, and they did it safely,” Smith said, adding that the Fitzhugh crews worked around the clock for about two weeks making sure the plants were safe and secure.

“They did a phenomenal job,” Smith said.

At the Electric Cooperatives of Arkansas Generating Station at Dumas, Logan Wilson, maintenance supervisor, and his team kept the diesel generator powering the pumps fueled. As at the other plants, the flooding at the plant, which went online in October 1999, was historic.

While the floods left much clean-up to do, there was no major damage to plants, Smith noted.

“The flooding was bad, but the response was great,” Smith said.