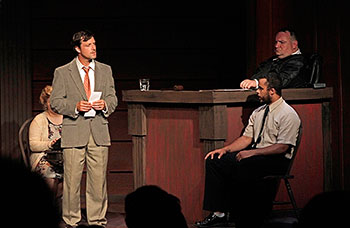 Actors Brittany Grooms, David Early, Walter Grooms and Derek Phelps in a scene from “A Time to Kill.” Photo by Cyndi Barr

Two years ago, there was neither “a penny nor a plan,” just the fertile soil of imagination of a small group in Pocahontas. Luckily, the group had proven expertise and passion for good theater and great stage productions that not only entertain but touch the audience. Within one year, The Downtown Playhouse opened with its first breathtakingly moving production, “A Time to Kill.” Two other productions, “The Sunshine Boys” and “Pump Boys and Dinettes,” would follow in Pocahontas’ newest art venue: a unique and fascinating facility designed with theatergoers in mind. Within its first season, The Downtown Playhouse would be named by the “Only in Your State” blog as No. 2 in the “10 Brand New Places in Arkansas That You’ll Definitely Want To Check Out.”

The Downtown Playhouse is now poised to open its second season June 24 with “Night, Mother,” a gripping, award-winning drama by Marsha Norman. The piece engages the audience from the beginning as it explores themes of mother-daughter relationships, family and the things that give meaning to life. And that, according to Artistic Director and General Manager Kelly Grooms, is exactly the kind of production he and friends of The Downtown Playhouse had in mind. The atmosphere in this intimate setting, where guests enjoy coffee and dessert along with the play, could not be more perfect.

Anyone who grew up in Randolph County in the 1940s, 50s, 60s and 70s remembers Saturday nights or Sunday matinees spent munching popcorn while John Wayne or Jimmy Stewart rode across the big silver screen of the Imperial Theatre, located a couple of blocks north of Pocahontas’ Historic Court Square. Among those with such memories are Pocahontas natives and boyhood friends Jake Foster and Mike Dunn, the two credited by Grooms for putting into motion this amazing, circular story. “I just can’t thank them enough,” he said. Both men, like Grooms, had been involved some 25 years earlier in working in that old movie theater with a local arts organization, the Studio for the Arts/Imperial Dinner Theatre. When the arts organization was able to expand its operation and move into its new facility in East Pocahontas, the old movie theater building was sold to the Pocahontas Music Theatre. Following the death a couple of years ago of the music theater owner, Foster received a call asking if he would be interested in buying back the building. Foster’s first move was to ask Grooms whether he had a desire and willingness to develop a new theater program there. The answer was an unqualified “Yes.” Foster’s next move was to call his old friend Mike Dunn and to tell him, “You and I just bought the old Imperial Theatre building!” 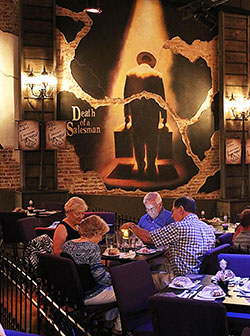 The experience begins when a patron enters the renovated and remodeled theater, described variously as “urban grunge,” “shabby chic” and a place “where Beale Street meets Broadway.” Guests gaze in awe in all directions in this intimate coffeehouse setting, designed by Grooms with help from a couple of talented artists he describes as “the magicians who made it happen.” His son, Brendan Grooms, an accomplished portrait artist, drew six iconic Broadway images on the theater’s thick interior concrete walls. Then father and son, using a special “reverse” process, chipped away parts of the concrete to accent and add definition to the images from “Les Miserables,” “Phantom of the Opera,” “Death of a Salesman,” “Jesus Christ Superstar,” “Cats,” and “Wicked.” Completing the interior of this anything-but-ordinary playhouse, scenic artist Donna Little provided the faux art to create texture, depth and tone.

The entire operation is a family and community affair. Grooms considers The Downtown Playhouse “a testament to this community.”  In just 15 months’ time, he said they raised $156,000 for the renovation and remodeling. He is pleased to be able to say that The Downtown Playhouse is “all privately funded and volunteer labor.” From day one, he pointed out, “this organization has been blessed with wonderful volunteers from all walks of life who simply want to share the joy of live stage production at its best. They have swept, scraped, scrubbed and sweated. They have measured, planned, built, painted, donated and procured, all to create a wonderfully unique destination for visitors and locals to enjoy. One day I was on my hands and knees screwing down a board. It was bad hot. I looked up. There stood (retired teachers and theater enthusiasts) Jon and Janet Crabbe, and Jon said to me, ‘Don’t know if you know it, but I’m a finish carpenter…’” Grooms shook his head and smiled at the thought. “We just all did it as a family.” 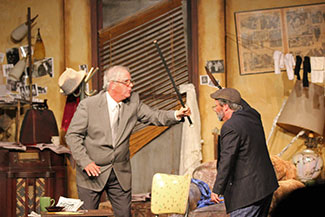 Grooms teaches full time at Black River Technical College (BRTC) and serves as chairman of the Fine Arts Department. His master’s degree in theater includes a thesis on building community theater programs in rural communities in Arkansas, Missouri and Oklahoma. His plans include the addition of courses for a theater emphasis at the college by the 2017-18 academic year. The Downtown Playhouse also serves as a concert-lecture series venue for BRTC and other organizations throughout the year.

“I love doing this,” Grooms said, “whether acting, directing or design.” And he does all three extremely well.

“When you act, there’s that thing for the ego. When you direct and design, it’s all inward; no one thinks a lot about who did the set. When directing, if it’s well done, the directing is not obvious.  Nobody knows or cares who made it happen. When you are young, you want to hear people applaud. When you are older, it’s knowing that one moment was exactly right. I love that. I really do.”

Tickets for the show, dessert and a drink are $18.