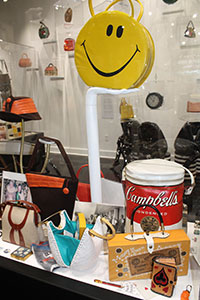 The 1960s saw an explosion of pop art and the emergence of name-brand designer bags. photo by Jenny Boulden

Think about your mother’s purse. What did it look like? Was it heavy? What did she carry in it? How — and this is one detail many people are surprised to remember — did it smell?

These are the sorts of questions Anita Davis loves to ask visitors who wander into her ESSE Purse Museum in downtown Little Rock, on South Main Street (SoMa District). “It’s so interesting to me, these memories we carry of our mothers are so often tied up with our memories of the bag she carried and all the mysterious things it held inside,” Davis said. Her own mother’s purse smelled of tea rose. Another patron recalled his mother’s purse smelling of the Vaseline she carried for her arthritis. He told Davis he hadn’t thought of that scent memory in years.

That’s the magic of Davis’ sparkling personality mixed with her collection of more than 300 often-sparkling purses. “The history of purses in America is really a history of the modern American woman,” she said, explaining the museum’s concept.

When she’s available, Davis herself likes to welcome museum visitors, often regaling them with stories of the pieces on display, asking them questions about their preferences and memories of the decades covered. The discussions can be lively.

Asked about her own personal favorite find from her collection, Davis points out a black, squarish, oversized clutch. The clasp of the purse is a giant brass-toned safety pin that stretches the entire length of the clutch, about 12 inches. “It reminds me of Audrey Hepburn,” she said. “It has such a classic look.”

The main displays are organized by decade, covering the entirety of the 20th century. What you see as you make your way through the collection is much more than the bags themselves. Davis said the purses they carry and the things they carry in them tell stories of a woman’s essence.

There are only three museums in the world dedicated to purses: one in Amsterdam, one in Seoul and ESSE in SoMa. You might be surprised how many visitors to the museum are out-of-state tourists.

This tiny, intricately beaded poodle purse was designed for cuteness, not practicality. photo by Jenny Boulden

Going through the brightly lit museum with its sleek, minimalist palette of whites with glossy black accents, the purses, historical photographs and “purse-things” on display tell a compelling story of how women’s lifestyles changed over the course of the last century. Originally the purses were optional accents in a woman’s attire (similar to their function at formal events today). The earliest displays showcase tiny purses with tinier feminine supplies — a pillbox, matchbox, a woman’s social calling cards or perhaps a small tin of rouge. They tended to be large enough for gloves, but not a lot else.

The decades of fashion and function exhibits go on through the 1990s, telling stories of war influences, pop culture, designer labels, big hair and shoulder pads, and the emergence of cell phones and bags large enough for laptop computers.

It’s a fascinating way to study American culture, this overview of purse evolution. As Davis and the other helpful museum staff tell visitors, more so than any other accessory, a purse speaks to what kind of choices a woman has made in her life. What she carries with her, be it diapers or makeup or a good novel, illustrates what she is about, what matters to this person, at this time in history. “You can see what’s going on in the world she lives in and what specifically makes her tick, who she is now and maybe what she dreams of becoming,” Davis said. 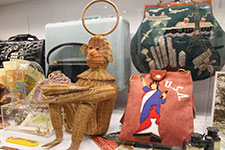 One of the vintage travel purses, a monkey-shaped carry-on. photo by Jenny Boulden

Another aspect is creatively inspiring — out of one simple, functional accessory the human brain has crafted so many wildly different and inventive designs. There is a real artistry apparent in the handbags, whether hand-sewn or manufactured. Just taking in so many bright colors, sizes, shapes, functions, materials, styles and patterns does something to delight the part of your brain that appreciates interesting objects in and of themselves.

Museum patrons often return again and again just for the well-stocked gift shop. Most items sold there (ranging from exclusive, artisan jewelry to wallets to, of course, dozens of stylish handbags) are surprisingly affordable and well-made. It’s a fantastic spot to shop for gifts, including some

“I never thought I’d own a museum,” Davis admitted, “But that’s what has happened. I love this place. There are as many types and styles of purses in the world as there are women. I find them all so interesting.”