Good gardeners aren’t born with “green thumbs” that give them mystical powers to make any plant thrive. Gardening is like any endeavor. The more you know, the more success you’re likely to have.

Every setback can serve as a learning experience and evidence for the saying that “Everything I learned about gardening can be found in my compost pile.”

One way to speed up the process is by taking advantage of the knowledge of those who have killed their petunias and dogwood trees before you.

Here are some of the most important woes that our “foregardeners” would warn you about:

1.Not improving lousy soil. If you’re blessed with reasonably good soil, just loosen and plant. But if you’re starting with soil that’s more of a sand pile, clay pit, quarry-in-waiting or compacted subsoil left behind by home construction, plan on some remediation.

One school of thought advises rototilling or deeply digging the ground to at least 10 or 12 inches deep, then working about 2 inches of compost, rotted leaves or similar organic matter into it.

A second school of thought advises topping the landscape-bed-to-be with about 12 inches of wood chips and then waiting at least six weeks for decomposition to start. Then the chips can be pulled back to plant and move among the plants as mulch.

You only need to do either of these once — before planting. From then on, just keep a two- to three-inch layer of organic matter over the surface and let the earthworms and microbes be your “soil improvers.”

2. Planting too closely. This common blunder includes planting plants too closely to one another, as well as too 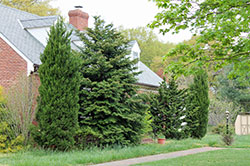 closely to the house. Crowding sets you up for a jungle look within a few years, sets the stage for unnecessary pruning, and makes plants more prone to disease since crowded foliage doesn’t dry as well.

Determine the mature width of your new plant and space according to that — not its current size. A good rule of thumb: Add mature widths together and divide by two, then plant no closer than that. (Example: 8-foot holly beside a 4-foot spirea. 8+4=12, divide by 2, equals 6-foot minimum spacing.)

To space from houses, simply divide the mature width in half and plant no closer than that. Example: An 8-foot holly should go no closer than 4 feet from the house.)

3. Too-deep planting. This one’s a major killer of trees. Planting deeply doesn’t make a tree less likely to blow over. It’s likely to suffocate the roots and rot the buried bark.

Before planting a new tree, identify its “root flare” — the area at the base of the trunk where it begins to slightly widen. Plant so that this flare is just above grade.

Be aware that potted and balled-and-burlapped trees are often already planted too deeply in their pots and bags. You may need to excavate soil to expose the flare.

4. Poor planting practices. Go wide but not overly deep with those holes when planting trees and shrubs. Most roots spread out within the top one to two feet of the surface as opposed to going straight down deeply.

Dig holes for your trees and shrubs three to five times as wide as the root ball but only as deep as the root ball (so the soil doesn’t settle underneath and cause the root balls to sink). Fray out circling roots, and don’t plant too deeply. Tamp the soil and water well after planting. 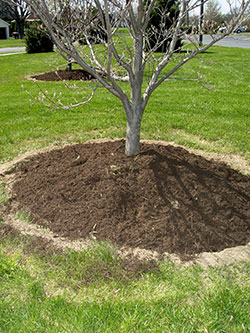 5. Mulching miscues. You can overdo it or underdo it with mulch, which is the coarse wood or organic matter used on soil surfaces to discourage weeds and retain soil moisture.

Too much mulch can cause the same problems as planting too deeply. Too little won’t stop weeds or retain moisture very well. Especially be careful not to pack mulch up against the stems and trunks of plants. That can rot the stems and bark and possibly kill the plants.

Two to three inches of organic mulch (i.e. bark mulch, chopped leaves, pine straw, shredded hardwood) is ideal around trees and shrubs. One to two inches is fine around flowers.

6. Watering blunders. Your goal is to keep the soil consistently damp (never soggy) all around the root ball and to just below it. That encourages roots to grow out toward the water without rotting them.

The best way to gauge the amount: water slowly enough that the water soaks in instead of runs off for the time you think is right. Wait 10 or 15 minutes and use a stick or probe to go down beside the root ball to see how deeply the soil has been moistened.

If it’s excessively wet, cut back next time. If it’s not wet deeply enough, you’ll need to water more or for longer.

Once you know the time and amount that’s just right for that bed, deliver it according to weather and plant size.

Plants with bigger root balls, such as trees and shrubs, are best soaked deeply once or twice a week. Vegetables, annual flowers and newly planted perennials are best watered two to three times a week in hot, dry weather since their roots are shallower and closer to the surface (which dries out fastest).

You won’t need to water as much when it’s cooler and cloudier and probably not at all if a soaking rain does the deed for you.

Pay more careful attention to regularly watering young plants, ones with roots that are limited and more at risk from dry soil.

7. Picking problem-prone plants. Plants have their own particular site preferences (especially when it comes to light and soil moisture), and some are pickier about them than others. Some do a good job of adapting to a variety of sites, while others need close to ideal conditions or else they’ll struggle and possibly die.