For Regina Clark and her family, operating the historic Main Theatre in downtown Berryville is part of their dedication to the community.

“It has been a lifelong commitment to this community; to be here and to run it,” said Regina Clark, who owns the theater and the adjacent Good Times Pizza Co. 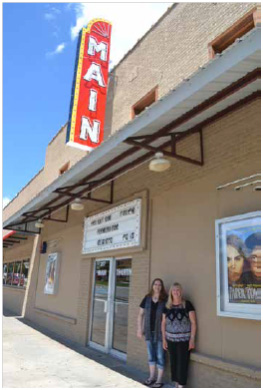 That commitment began in 1974 when Regina’s husband, Kenny, bought the historic theater and ran it while also working full-time as the chief medical technician at the local hospital. Eventually, he retired from the hospital, but he kept his beloved theater. Last year, he died unexpectedly at the age of 65, just after he had completed most of a major remodeling of the theater.

It’s been a tough year for the Clark family, but Regina and her youngest daughter, Courtney, are making sure the show still goes on at the Main Theatre. They know it is what Kenny would have wanted.

“We want to keep it going for the community,” Regina said. Courtney added that outside of Berryville, the closest movie theaters are located in Fayetteville, about 60 miles away, and Harrison, about 30 miles away. “It would be a significant loss to our community,” she said.

Dinner and a movie

The movies are shown at 7:30 p.m. each Friday, Saturday and Sunday. In addition to such traditional offerings as popcorn and soda, Main Theatre patrons can go next door to the Clark family’s Good Times Pizza Co. restaurant, and purchase pizza and sandwiches, among other items. If they want, they can take the food into the theater for a convenient “dinner and a movie” experience.

The Clarks opened Good Times Pizza Co. in 1983. In the beginning, the restaurant was located inside the theater. In 1987, they moved it next door to provide more space.

“For 32 and a half years, I have been cooking pizza,” Regina said, smiling. She added that the entire family has worked at both businesses throughout the years. “They all grew up here,” she said. “They are grown and married with children now, but when they come home, they still come over here and work.”

Courtney recalled working at the theater as a child. “When I was tall enough to see over the counter, I was selling candy and annoying the teenagers at the concession,” she said. “And then I was a teenager working the concessions.”

In addition to the family, the theater and restaurant have provided jobs for many young people over the years.

In 2014, Kenny made the decision to remodel the theater and add a new digital picture and sound system. The digital system was required because movie production companies had stopped providing 35-mm film copies of movies to theaters. The project also included adding new seating and widening the distance between the seats to make it more comfortable for patrons.

“It was either invest and keep up, or close,” Regina said. “Kenny said, ‘I can retire and we can quit, or we can invest and go forward.’”

They chose to invest and the community is the beneficiary. (An article in the July issue of Arkansas Living incorrectly stated that another person had done the remodeling of the theater.) She noted that Berryville has always supported the theater.

“There are people that grew up here who used to pay 15 cents to go to the movie, and they are still coming here,” Regina said, adding that her family is committed to providing the movies and concessions at affordable prices. Soft drinks are $1 and $2 while popcorn is $2 and $4. The movies are $4 for children and $6 for adults.

Many of the movies are first-run, but the Clarks are careful about what they show. “Our movies are booked by us; we don’t have a booker,” Regina said. “And they are selected with our community in mind.”

While the Clarks were working on their theater remodel, others in the community were busy working on restoring some of the downtown’s old signs that were painted on the walls of buildings. As an offshoot of the Berryville Community Restoration project, Rick Barrows, a Berryville native who owns Multi-Craft Contractors, Inc., removed the theater’s old neon sign and replaced it with a modern replica, complete with LED lights. “He made a completely new sign to the same specs exactly and even used the old style of the letters,” Courtney said.

Kenny would have been pleased, Regina said, adding that the support of the community has been the real key to the theater’s longevity.

“Berryville is still small-town America,” Regina said. “People know each other and love each other here.”