For only comprising about 1 square mile, the small town of Cotton Plant in south Woodruff 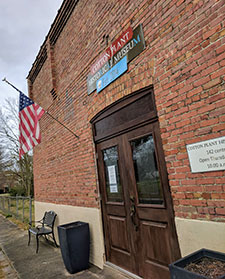 County has packed a lot of punch over the decades. It was Cherokee land before Arkansas became a state, was the site of a Civil War skirmish, and, later, was one of the state’s industrial leaders.

“At one time, it was one of the fastest-growing communities in Arkansas,” said Cotton Plant native Willard Ryland. He’s the town’s former mayor and current head of the local chamber of commerce. True to the town’s very name, the growth was largely due to cotton, in addition to timber. “There were four cotton gins here,” he said.

A 1905 newspaper article notes two banks, three hotels, lawyers, churches, a dentist, a shoemaker and a jewelry store. “It was a little boomtown,” Ryland said.

Fast forward to the 1970s, when Ryland graduated high school. “Main Street was packed,” he said.

Additionally, a surprising amount of notable people have lived in Cotton Plant, including a “devilish” bluesman, William Bunch, and a gospel guitarist, Sister Rosetta Tharpe. Tharpe’s induction into the Rock and Roll Hall of Fame in April 2018 has been turning eyes again to the town. Indeed, guitarist and singer Sister Rosetta Tharpe — known today as the Godmother of Rock ’n’ Roll — was born in Cotton Plant in March 1915. Decades after her October 1973 death in Philadelphia, her guitar sound is still reverberating. As for Ryland, his return to his hometown after retirement echoes the town’s musical mentors — “It was a spiritual draw.”

But it’s all in a day’s work around here, said Angela Ryland.

The godmother of rock

Tharpe had been a performer all her life, starting in Arkansas as a child. She grew up in the Church of God in Christ branch of the Pentecostal church, singing with her mother, Katie Harper Bell Nubin. 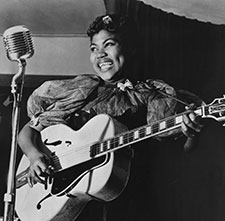 Reportedly, Tharpe was playing guitar as soon as she was able to hold one. She first recorded in 1938, while still in her early 20s, singing gospel songs and playing a Resonator guitar solo in a bluesy style. She soon was taking gospel to the night clubs, recording scandalous secular songs like “I Want A Tall Skinny Papa,” with a full band, and playing electric guitar. She left church congregations and concert audiences dizzy in her wake, trying to keep up.

In the 1940s, Tharpe had radio play, sold-out concert halls across the country, and hits like “This Train,” “Rock Me,” “Didn’t It Rain?” “Up Above My Head” and “Strange Things Happening Every Day.” Along the way, she began to influence the upcoming generation: Chuck Berry, Elvis Presley, Johnny Cash, Bonnie Raitt and Isaac Hayes have all cited her as an influence. She gave Little Richard a chance to sing onstage with her when he was still a boy. More recently, Rhiannon Giddens (The Carolina Chocolate Drops) and Britney Howard (Alabama Shakes) have given the Sister praises.

As electric guitars became widespread in the 1940s and 1950s, Tharpe was an early adherent — her lead guitar licks soared, even in the gospel music context. Her sunburst Gibson Les Paul and, later, her white Gibson SG were instruments with a definite rock ’n’ roll sound. She first toured Europe in 1957; you can hear her influence in such British guitar heroes as Jimmy Page, Eric Clapton and Keith Richards. That decade saw her eclipsed commercially in the U.S. by gospel singer Mahalia Jackson, to whom her career was often compared, but there was never anyone like Tharpe.

While Tharpe was a star within the gospel genre, she transcended it. In 1951 some 25,000 people paid to see her get married at Griffith Stadium in Washington, D.C., to her third husband and then-manager. An album of the ceremony was later made available for sale. She toured Europe again in the 1960s as American blues saw renewed popularity abroad. Her now-iconic May 1964 performance in the rain on a train platform in Manchester, England, was recorded for television. Tharpe continued performing up until the end; she died of a stroke on Oct. 9, 1973. She had been scheduled for a recording session the following day.

Tharpe even appeared on a U.S. postage stamp in 1998. But it’s been the 2018 Rock Hall induction — coupled with the 2017 dedication of Arkansas 17 near Cotton Plant as the “Sister Rosetta Tharpe Memorial Highway” — that’s generated the best buzz for the area in a while, Angela Ryland said. She’s been working with the Arkansas Department of Transportation to get an informational sign placed on Interstate 40, less than 10 miles away, pointing drivers to Cotton Plant. “The Sister’s going to put us on the map!” she said, laughing. 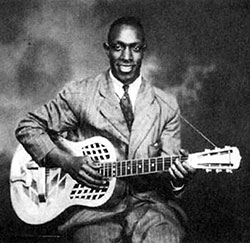 But Rosetta Tharpe’s not the only well-known and influential Cotton Plant musician. William Bunch is buried in Cotton Plant, the town he called home, though some sources list his birthplace as Ripley, Tennessee. Bunch was a highly prolific and influential bluesman of the 1920s and 1930s, recording for Decca and Vocalion labels. A guitarist and pianist, he recorded dozens of blues songs. Known professionally as “Peetie Wheatstraw,” he appeared on his records as “Peetie Wheatstraw, the Devil’s Son-In-Law” and “Peetie Wheatstraw, the High Sheriff of Hell.” Bunch used the wicked Wheatstraw persona as a lyrical springboard to discuss his general popularity.

But as a songwriter, Bunch additionally tackled topical events like Roosevelt’s New Deal and

Prohibition repeal. His trademark lyrical catch-phrase “ooh, well well” was copied by others, including famed bluesman Robert Johnson, to the point it’s become a blues cliche. Johnson also adopted Bunch’s boastful devilish imagery, but turned the playful braggadocio into mournful Faustian bargaining. In addition to their shared influence on blues and rock, Bunch and Johnson are

Bunch died in a car accident on Dec. 21, 1941 — his 39th birthday — in East St. Louis, Illinois. His body was shipped back to Cotton Plant for burial, and his gravesite continues to be visited by blues fans. There’s information on Bunch and Tharpe at the Cotton Plant Historical Museum.

Rosetta Tharpe and William Bunch — such is the richness of east Arkansas’ heritage that these two American musical legends could both call Cotton Plant home.