Alison Coffey of Poinsett County takes her turn at the microphone for the 2020 Arkansas State Spelling Bee. photo Chance Allmon

A school is the last place most students want to be on a sunny weekend morning. But the place to Bee on this Saturday, Feb. 1, is at the Cabot High School auditorium, hive of the 2020 Arkansas State Spelling Bee. And it’s buzzing with a frenzied energy — the result of little rest, long drives and plenty of sugar from pastry platters.

Sharp students and their supportive parents and siblings have awakened early — that is, if they could sleep at all — to travel from all parts of the state for the chance to advance to the Scripps National Spelling Bee.

This is the first year that the state Bee is being sponsored by the Electric Cooperatives of Arkansas.

“The Electric Cooperatives of Arkansas have a history of supporting youth education in Arkansas, and we are honored to sponsor the Arkansas State Spelling Bee,” says Rob Roedel, corporate communications director for the Electric Cooperatives of Arkansas. “Our goal is to support spelling bees in all 75 counties and continue to work to create education opportunities for young people in Arkansas.”

(Speaking of cooperatives, “cooperate” is actually a competition word in Round 3.)

It seems only right to break down the day’s action alphabetically. Here are the ABCs of the Spelling Bee.

Arkansans:  Some 50 students will battle in the state Bee. Bright ones. After all, more than 78,000 students 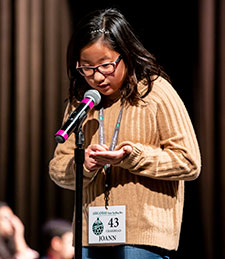 Craighead County’s Joann Kim mimics writing in her palm with her finger to visualize a word. photo Karen Seagrave

from 500 schools in 60 counties “tussled” (past tense of one of today’s practice round words) in local and county contests leading up to this event. When it comes to vocabulary, each child present is an “exemplar” (a Round 4 word).

Buzzer:  Every round, participants are told a word to spell. They announce the word, spell it, then repeat it. Correctly spelled words are rewarded by a cheerful ding chime and advancement to the next round. Incorrectly spelled words result in elimination and are punctuated by a fail buzzer with a “cataclysmic” (a Round 6 word) urgency.

Children:  Two microphones positioned at different heights emphasize the age differences of the students, who range from third- through eighth-graders. All wardrobe selections — from dapper jackets and oxfords to chill athleisure and sneakers — display an individual sense of “panache” (a Round 1 word).

Definition:  Spellers may request a definition, a sentence, the part of speech, the language of origin and 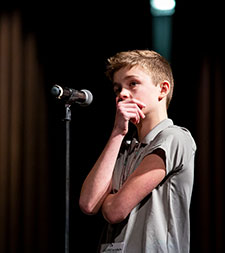 alternate pronunciations. Doing so is a great way to ensure comprehension. And an even greater way not to “hasten” (a Round 2 word) the process and stall for more time.

Ermine:  It’s early in Round 1 when more mature spectators already hear words unfamiliar to them. Like “ermine” (“any of several weasels that assume white winter fur, usually with more or less black on the tail”). Realizing that one is definitely not smarter than a fifth-grader brings a “rictus” (another Round 1 word, meaning “a gaping mouth or a grimace”) to one’s face.

Fidget:  As if just sitting still isn’t hard enough, the young competitors — when not at a mic or lined up behind one — must remain in their chairs. On a stage. In front of strangers. Under intense auditorium lights. There’s “twitchy” (a practice round word) squirming in seats. And nervous body language — hands shoved into hoodie pockets and grasping “stomachs” (plural form of a Round 3 word). 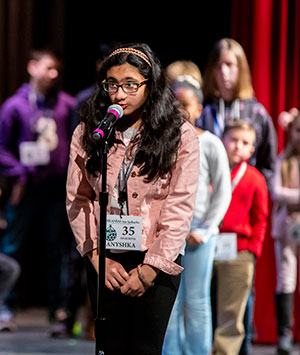 Representing Ouachita County, Anyshka Rajwani is one of 50 spellers to compete in this year’s state contest. p[hoto Karen E. Seagrave

with the “grievance” (a word from a later round; see the letter “R” entry) table. Several challenges are submitted over the course of the morning and afternoon. But, ultimately a panel of three judges has “jurisdiction” (a Round 5 word). And the Scripps National Spelling Bee doesn’t get involved. Its “2020 Rules for Local Spelling Bees” emphasizes in all capital letters: “DECISIONS OF LOCAL SPELLING BEE OFFICIALS ARE FINAL.”

Heart:  When 8-year-old Cooper Brown, representing Conway County, is asked about what he did to get here today, he says “earnestly” (a Round 3 word), “I just kind of had to study hard and just had to spell with my heart.” When asked to elaborate, he continues, “Like, just do what I think is right.”

Importance:  In an age of spell-check and autocorrect, is spelling really that significant? The children say it should be a “priority” (a Round 1 word).

“I think it’s more important than people realize,” says Robert Russell, 12, representing Bradley County. “Because it’s how we (communicate with) each other. It shouldn’t really be forgotten.”

Liricka Farr, 9, representing Saline County, says, “I think spelling is important because, let’s say, you’re writing an essay and you get a word wrong — you could have gotten 100%. And it has to be handwritten, so you can’t use your electronics.” Indeed. Mastery of our “lexicon” (a Round 2 word) matters. 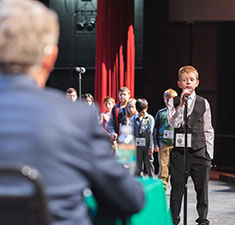 Kudos:  While it’s their job to adjudicate, judges also can’t help but admire the “ambitious” (a Round 1 word) children. Says judge Hawley, a mom of two little ones herself, “It was an honor to serve as a judge. Every speller was not only prepared, but also showed remarkable poise. All of the contestants should feel incredibly proud.”

List:  To prepare for the Bee, students study Words of the Champions, a 4,000-word resource available as a download, as a Kindle eBook and a paperback book. There’s also a Word Club app for that.

“Train” is the verb used by contender Alexander Tenace. The eighth-grader, representing Independence County, speaks of spelling the way athletes discuss their sport. With parental help, he has devoted about an hour a day to this pursuit.

“You’ve just got to train. You’ve got to study the words and know what they mean, know the origin, stuff like 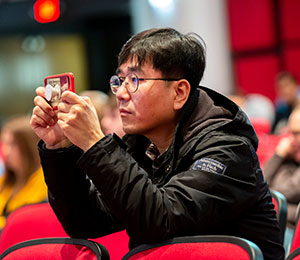 that,” he says. “We’ve been training for this.” And it shows. Alexander, who will finish in fourth place today, bests his 10th place finish from last year.

Mimic:  While no writing implements are permitted in the oral competition, several visually oriented students imitate the scribing of words on their hands or laminated contestant numbers by using their fingers as imaginary “makeshift” (a word from a later round) pens.

National:  The winner of the state contest will represent the state at the 93rd annual Scripps National Spelling Bee the week of May 24 at the Gaylord National Resort & Convention Center in National Harbor, Maryland. Finalists in the national Bee receive gift cards and cash prizes, ranging from $500 to $25,000. The champion (or champions, see the “X”entry) receives $50,000 and other prizes for a command of orthography.

Orthography:  Orthography, defined by Merriam-Webster, is “the art of writing words with the proper letters according to standard usage.” It’s a fancy word for spelling.

Pronouncer:  Perhaps more challenging than spelling words like “obelisk,” “peripheral” and “leguminous” is saying them. And then, if asked by the speller, repeating them. And repeating them some more. And defining them. And using them in a sentence. And giving the part of speech. And providing the language of origin. And offering additional pronunciations. And repeating them yet again. Celia Storey, an editor and columnist for the Arkansas Democrat-Gazette, is the official pronouncer who handles this for hours. While standing. This job is definitely not “sedentary” (a Round 1 word).

Storey says, “Backstage, the spellers told me I was like a robot pronouncer. I think they meant it as a compliment! I was glad, really, because it showed they had no idea how much I was cheering for them inside.

“I so wanted every last one of them to win.”

Quaver:  It’s what some of the tiny voices do when they speak into the mics. It’s also a Round 1 competition 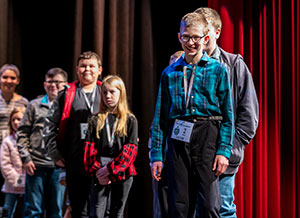 Competitor Jacob Hann of Pope County is all smiles as he awaits his chance. Karen E. Seagrave

Rounds:  A round is complete when each speller has had a chance to spell a word. Rounds are easy to count in the beginning when there are dozens of children. But when few competitors remain, back-to-back rounds are harder for the audience to track with any “certitude” (a Round 2 word).

Slang:  In between words like “dilapidated,” “betrothal” and “pomposity,” the Bee also includes more informal words that have become part of the vernacular. Words like “zillionaire,” and “Tinseltown” and others equally “bizarro.”

Treasure:  In addition to the chance to participate in the Scripps National Spelling Bee, the state champion will receive: a champion plaque; six nights of hotel accommodations while competing; a $450 cash prize; a 2020 U.S. Mint Proof Set; and one-year subscriptions for Britannica Online Premium and Merriam-Webster Unabridged Online for even more “edification” (a Round 4 word).

Update:  What began with 50 children steadily diminishes down to a dozen, then to a half-dozen and then rapidly reduces to five, to four, to three and finally to two.
The auditorium’s “occupancy” (a Round 4 word) has dwindled.

Victor:  The winner? Nope! Not until we reach “Z!” After all, those participating have to wait four hours until a conqueror emerges. So, hold your horses. Or hold your “cavalcade” (a word from a later round).

Westerlies:  This plural noun is ultimately the championship word that determines the winner. “Westerlies,” which means “winds blowing from the west,” results in the winner heading northeast to the national Bee.

XCII:  Speaking of the national Bee and winner, the 2019 Scripps National Spelling Bee — the 92nd annual competition — resulted in an unprecedented eight-way tie.

Youth:  Just how young these precocious children are is evident in the final round when the remaining two challengers — 10-year-old Thomas Sinclair of Garland County and 12-year-old Srikar Chittemsetty of Benton County — go head to head.

After Thomas misspells the word “faddish,” it’s Srikar’s opportunity to win if he nails his championship word.

Only that word is the name of a music movement that occurred years before his time.

“Your word is ‘grunge,’” Storey says.
Srikar: “Can you repeat the word?”
Storey: “Grunge.”
Srikar: “Are there any alternate pronunciations?”
Storey: “No.”
Srikar: “May I have the definition?”
Storey: “Rock music incorporating elements of punk rock and heavy metal.”

After asking to hear the word several more times, to hear it in a sentence, to have the sentence repeated and to 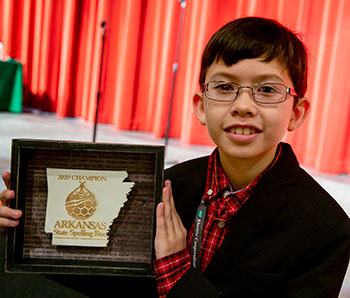 Thomas Sinclair of Garland County, the 2020 Arkansas State Spelling champion, will represent the state at the Scripps National Spelling Bee in National Harbor, Maryland, the week of May 24. photo Karen E. Seagrave

Zenith:  At long last, we have a winner.

The older and taller Srikar, who confuses “camelry” and “cavalry,” is named the runner-up; his prize is a plaque and $300.

Thomas, who gets a second wind by crushing “westerlies,” is named the champion.

Though perhaps it shouldn’t have been. This was Thomas’ second time to compete in the state Bee, and he made an impressive showing in 2019, finishing in 11th place.

While 10-year-old Thomas appears completely collected, he admits, “At the end, I was a little bit nervous.”

Spelling isn’t Thomas’ only passion. When asked about career paths he hopes to pursue, he says, “Pianist. Maybe an engineer. And maybe a chemist or science teacher.

For now, he’ll just plan to proudly represent Arkansas in May.