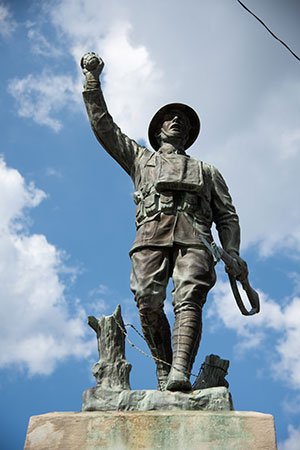 “The Spirit of the American Doughboy” statue in Helena-West Helena, Arkansas.

Immediately following World War I, even beyond Armistice Day, national interest was understandably high in finding ways to honor and remember the Americans who had served in the war and helped bring about victory. In 1920, E. M. Visquesney, an Indiana sculptor of French descent, himself a veteran of the Spanish-American War, created a life-size, pressed-copper statue called “The Spirit of the American Doughboy,” which would come to be a defining icon of World War I.

The sculpture was mass-produced and purchased by cities all over the nation; the Smithsonian Instituion lists 159 locations of the statue, though many are known to have been destroyed, damaged or stolen. Countless miniatures, replicas and variations of the original statue exist as well.

Visquesney seems to have had a knack for sales, or at least for inspiring the masses. Knowing communities across the U.S. were searching to invest in memorials to the soldiers, Visquesney sought to craft an image of timeless American assertiveness and confidence. His Doughboy is strongly reminiscent of the Statue of Liberty, in the same pose: striding forward, right arm raised, but holding a grenade in place of a torch and a Springfield rifle with a bayonet in place of the Declaration of Independence.  Around his feet he’s stepping through barbed wire, signifying he’s striding confidently through the deathly battlefront known as No Man’s Land. It’s a pose that inspires and speaks to American resilience in the face of unfathomable odds.

Arkansas has two of the statues: one in Fort Smith and one in Helena. Arkansas’ two statues are individually on the National Register of Historic Places. When you’re in those areas, search them out and pay your respects. A comprehensive list of the statues’ locations, plus more historical detail, is available at www.doughboyfinder.weebly.com. In addition, there are other sites and memorials dedicated to World War I in Arkansas. Visit wwiarkansas.com for more details.