Statues of the Little Rock Nine, created by John and Cathy Deering, stand on the Arkansas State Capitol lawn. Courtesy of Arkansas Department of Parks Heritage and Tourism

Sixty-four years ago this month, Little Rock was the site of the Central High Desegregation Crisis, one of 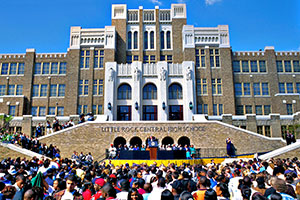 the most prominent events in the nation’s civil rights movement.

Today, the story of the crisis is part of the city’s Arkansas Civil Rights Heritage Trail. In addition to the high school itself, the trail traces the sites where the crisis played out, including a bus bench at 16th and Park streets. A replica, flanked by commemorative plaques, marks where, on Sept. 4, 1957, one of nine Black students, known as the “Little Rock Nine,” took refuge. Elizabeth Eckford, who’d arrived for the first day of school separately from the other eight Black teens, had just been barred from entry by Arkansas National Guardsmen.

Walking to the bus stop, in the dress she had made to wear with crinoline petticoats, the 15-year-old was 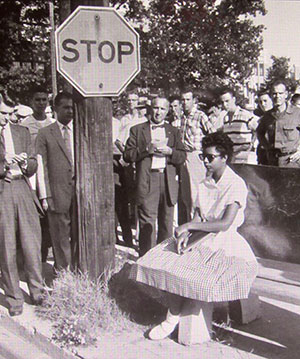 Elizabeth Eckford, one of the Little Rock Nine, waits for a bus after being turned away from Central High. Courtesy Little Rock Central High School National Historic Site

bombarded with jeers and curses. Sitting silently on the bench while the verbal volleys continued, she was comforted by a New York newspaperman until the bus finally came.

The Arkansas Civil Rights Heritage Trail, created a decade ago by the University of Arkansas at Little Rock’s Anderson Institute on Race and Ethnicity, traces nearly three dozen locations in the capital city. Eight of the sites are related to the Central High turmoil. Others mark less-familiar happenings, dating as far back as Little Rock’s formative decades before the Civil War.

Part of the U.S. Civil Rights Trail network, the route tells “the history of the long civil rights movement in Arkansas,” says John A. Kirk, the George W. Donaghey Distinguished Professor of History at the University of Arkansas at Little Rock. He has written nine books, including Redefining the Color Line: Black Activism in Little Rock, Arkansas, 1940-1970.

“I always point out that everything that happened elsewhere in America in the civil rights movement also happened in Arkansas — if you look hard enough to find it,” Kirk adds.

An example is denoted by a plaque at 201 W. Markham St., where a parking garage now stands. It was the site of a Mid-West Trailways bus depot in 1961, when five Freedom Riders from St. Louis arrived to protest Jim Crow laws. Their arrest was watched by 300 onlookers. Pressure from similar protesters here and elsewhere led all Little Rock’s bus terminals to desegregate later that year. 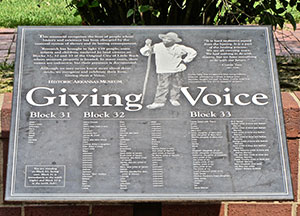 Antebellum slavery in Little Rock is recounted on a large outdoor plaque at Historic Arkansas Museum, 200 E. Third St. The “Giving Voice” marker lists 139 slaves who belonged to landowners around the year 1830 in the three city blocks now occupied by the museum. Last names are given for only six of them. The other 133 have first names at best, as for Block 31: “Rose, Rose’s child, unknown, Harry, John, Alfred, Ralph, Dain, Caroline, Eliza.”

According to the inscription, “This memorial recognizes the lives of people whose history and existence have been obscured by the immoral system of slavery, and its lasting consequences. Although we may never know more about these souls, we recognize and celebrate their lives.”

Much more is known about the Little Rock Nine. They are portrayed on the north lawn of the Arkansas State Capitol, striding with serene but steely courage in a sculpture by John and Cathy Deering. Their ordeal is conveyed in detail at the visitor center of Little Rock Central High School National Historic Site, at Park Street and Daisy L. Gatson Bates Drive.

Inside the visitor center, photographs and videos depict persistent efforts to   deny the students access to the school. Television footage shows the arrival of the 101st Airborne Division, sent by President Dwight Eisenhower on Sept. 24 to escort Eckford into the school along with Ernest Green, Minnijean Brown, Thelma Mothershed, Melba Pattillo, Gloria Ray, Terrence Roberts, Jefferson Thomas and Carlotta Walls. 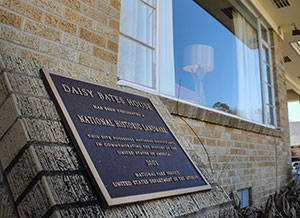 The Little Rock home of Daisy Bates, the primary mentor of the Little Rock Nine and a renowned civil rights activist, is now a National Historic Landmark. Courtesy Arkansas Department of Parks, Heritage and Tourism

Daisy Bates, renowned as a primary mentor of the Little Rock Nine, is honored at two trail locations. Her home at 1207 W. 28th St. has a front-yard commemorative plaque near the spot where segregationists burned a cross in 1957. Her tombstone in Haven of Rest Cemetery, 7102 W. 12th St., carries her photograph along with one of her inspiring quotations: “Your future is purchased in the present. Only the educated are free.”

Engraved on one of the nearby plaques is a message from Eckford that spans the 64 years since the onset of the Little Rock Central High crisis:

“I want students to realize the power in their words. You can bring change by supporting someone who is being harassed. It is important to know that you can be a hero to others by supporting them. It is my hope 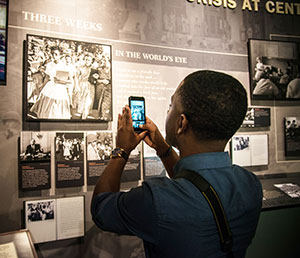 that no one will have to carry the burden of racism ever again.”

Detailed information on the Arkansas Civil Rights Heritage Trail is available at arkansascivilrightsheritage.org. Normally, the Central High visitor center is open 9 a.m.-4:30 p.m. daily, with guided tours available by reservation twice a day. As of press time, the National Historic Site was closed due to COVID-19, though some exterior sites, such as Elizabeth Eckford’s bench, remain open to the public. Call the visitor center (501-374-1957) or check on the website (nps.gov/chsc) to verify the current status of tours and public offerings before visiting.