“It’s unexpected art, by unexpected artists, working in an unexpected place, in an unexpected time in the town’s history,” explained the festival’s organizer and co-founder Claire Kolberg. “Everything about it felt unexpected, which was our intent.” “The Unexpected“ idea Kolberg said that she, along with co-founders John McIntosh and Steve Clark, both of Fort Smith, are avid fans of street art. They are friends with the famed Irish street artist Maser, who now lives in Fayetteville and who had previously done works in Fort Smith. As they witnessed large areas like Hawaii, London, New York and Las Vegas make waves with street art festivals, they approached Maser and asked, “Why not Fort Smith?”

Before deciding to proceed, the team brought in a big gun, curator Charlotte Dutoit, a world leader in this field, to discuss the idea. Between events, Dutoit splits her time between London and San Juan, but she flew into Fort Smith, absorbed the history, saw the space and listened to the team’s ideas. “When we got buy-in from Charlotte, we knew we could execute this at the level of quality we wanted. These artists are recognized across the world. They don’t know Fort Smith, but they know and trust her, and she knew what sort of artists would be a good fit with the town,” Kolberg said.

The team gave the artists Dutoit recruited 100 percent creative freedom (within the limits of publicly appropriate works), and access to select, owner-approved walls downtown. Kolberg said the participating business owners, who were thrilled and “beyond pleased,” have received a notable uptick in foot traffic from the privately funded festival. “To commission one of these world-class artists to do this size painting on your building would normally be tens of thousands of dollars,” she said.

Kelly added, “Together, the artists who came to Fort Smith have hundreds of thousands of Facebook fans. Getting to work with 100 percent creative freedom somewhere new, introducing this level of street art here is a tremendous incentive to the artists. They like to work on the edge of the movement.”

Kolberg said they specifically did not want a themed, literal interpretation of Fort Smith’s history, but that the pieces almost all connect in some way to it. A bunch of expressly Western- themed murals aren’t what street art is about, she explained, and this caliber of artists would not have been interested in being part of something more, well, expected.

Fans of the artists drove in for the mural festival from Little Rock and other cities. Part of the beauty of a mural festival is that the artists are all working at once, over the course of several days, in plain sight. People walking or driving by can check the artists’ progress each day. Kids get to watch it up close, sometimes help. “We had people carrying lounge chairs downtown to sit on the corner and literally watch the paint dry,” Kolberg said, laughing. “It was amazing how accepting and welcoming the Fort Smith community was of our artists. The whole town felt energized. There was something electric in the air.”

The artists, who work under their street names — VHILS, Maser, Askew, Ana Maria, D*Face, ROA and Bicicleta Sem Freio — together have hundreds of thousands of Facebook fans, so their Fort Smith works were seen “easily more than a million times” on the social network during the festival, Kolberg said.

This face of a Native American is carved into layers of stucco upon brick, not painted. Photo by Russ Jester

They each work in distinctively different styles. VHILS, a street artist from Portugal, actually carves oversized portraits into the face of buildings. Fort Smith Advertising and Promotion Director Claude Legris said visitors were fascinated when they realized that what, at first glance looks to be a three-story painting of an unidentified Native American, was made by adding, then carving through layers of stucco. The original red brick shows through in a few places, adding depth and interest to the work. The carved, textured work is even more compelling in person than in photographs.

Maser uses brightly colored geometric shapes and stripes to tell his stories in paint. His work next to the Fort Smith Post Office is an homage to famed Gen. William O. Darby, progenitor of the Army Rangers and Fort Smith native. Citizens have raised funds to add a bronze statue of Darby on his Army motorcycle in Cisterna Park, across from the painting. Near Rome, Cisterna is the Italian city where some of Darby’s Rangers’ most heroic feats occurred. It is officially Fort Smith’s Sister City. 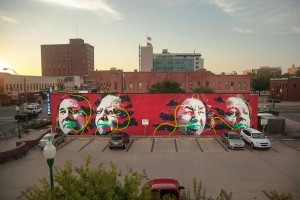 Askew, a self-taught street artist from New Zealand, often depicts indigenous people. In Fort Smith, he met with four Cherokees who live in the area, just over the river in what used to be Indian Territory. On the Trail of Tears in the 19th-century Fort Smith was the last stop for thousands of Cherokee natives forced to relocate to Indian Territory. Their faces, large and luminous, now grace a downtown wall facing west, toward their homes.

Belgian artist ROA also researched extensively natives of the area, but his trademark monochromatic work celebrates urban wildlife and rodents native to the region. His two pieces in downtown Fort Smith include anotter and a mole. The black-and-white otter and mole look like giant pencil sketches, each strand of fur a separate spray paint line. Kolberg said that ROA, a quiet, reserved personality himself, enjoys highlighting the small, quiet, overlooked creatures of an area. As she put it, “If he doesn’t celebrate the mole, who will?” 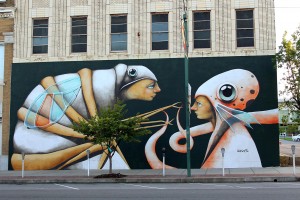 The sole female artist in this year’s festival was Ana Maria, from Puerto Rico. The beasts she paints are more fantastical, sort of hybrid insect-animals, with oversized human features. They look like they jumped off the page of a storybook; absolutely bizarre creatures that simultaneously feel relatable, even sympathetic. These are pieces that make passersby stop and interact with the paintings, something Kolberg said was extremely important to Ana Maria. “She is very focused on communication through art,” she said, “really going out of her way to answer questions from onlookers and hold conversations as she painted.”

The works of a Brazilian street artist duo known as Bicileta Sem Freio (Bicycles Without Brakes) almost crackle with energy. Their two works in Fort Smith are located downtown on Garrison Avenue and at the University of Arkansas at Fort Smith. Bright, bold shapes come together in unapologetically kinetic design. The painting downtown, ostensibly of Brazilian cowboys dancing at their harvest festival, captures Fort Smith’s decidedly frontier spirit.

The United Kingdom’s D*Face is one of the most prolific street artists in the world, a leading figure for more than a decade. His comic book-style giant gun, speeding bullets and bandana- clad cowboy riding across a half-block of downtown is probably one of the most popular of the new murals. The sunset backdrop has rarely looked more intense — and at certain times and angles you can also watch the actual sunset just beyond downtown as it hits the Arkansas River.

Another mural, on Grand Avenue, was completed by a group of art students from the University of Arkansas at Fort Smith, using their professor’s original design. The colorful shapes and typography invoke the Gutenberg printing press, a key instrument in the history of visual communication.

The murals are downtown, but they are not clustered immediately next to each other. They pepper the downtown so that as visitors turn a corner, they might meet with the unexpected sight of a giant otter “sketch” or the searching eyes of a detailed portrait. In time, however, Kolberg anticipates filling in much more of downtown with similarly world-class art. “I saw people walking downtown, falling in love with Fort Smith again,” she said. “You could see it intheir eyes, see it on their faces. We’re going to be doing our best to keep downtown Fort Smith and the festival unexpected.”

The mural festival was such an unmitigated success, 64.6 Downtown plans to repeat the international festival this September in Fort Smith, and for likely several years after, while moving forward with other downtown-revitalizing projects. The dates of the next festival are Sept. 2-11 with the full slate of artists and buildings announced in August.

Legris said the murals are sure to surprise and please first-time visitors and those returning for major events like last month’s Fort Smith Marathon or April’s Steel Horse Motorcycle Rally. “I don’t think people are expecting to find this level of sophisticated public art here. We’ll have fun surprising them.”