Donald Ray Smith doesn’t say much as he sits in a chair along Arkansas 5, just south of El Paso in White County, and waves at passers-by.

His dog Old Yeller is often close, sometimes sitting on a chair next to him.

“I don’t know. I like to come out here and sit for a while,” he said one morning as he sat on a chair, whittling. Most every car that passed by honked or waved at him and his dog. He waved back. 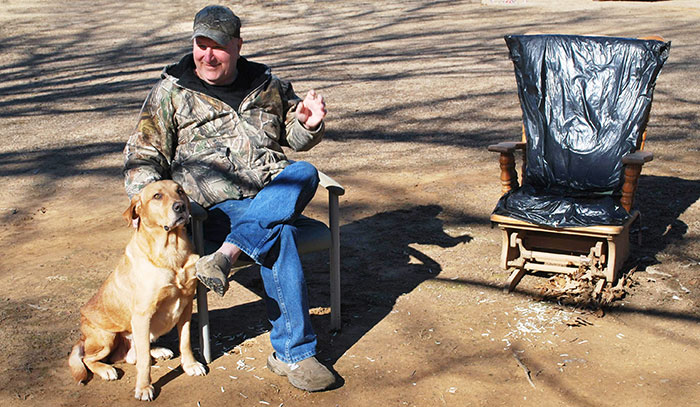 For 20 to 25 years, Smith estimates, he has been waving at passers-by. He’s become well known, albeit unknown.

“I don’t know his name, but he is on the side of the road most every evening, waving at people as they drive by,” said Roshelle Baker, who lives in Mount Vernon and works at the El Paso post office.

She said she sees him nearly every time she drives to Cabot and back. “He usually has his dog with him. He waves and I wave back,” she said.

Smith, 60, was born in El Paso and attended high school in Beebe. He most recently worked for Verco, a furniture manufacturer in Conway, before retiring.

He said he never intended to attract such attention.

“I often work outside mowing or burning the leaves,” he said, adding he just likes being outside with his dog. “If you stayed in the house all alone you’d go crazy. He (Old Yeller) likes it out here, too.”

People “honk all the time, even when I ain’t out here,” he said. “I’ll be in the house and hear them honking.” And while most wave or honk, “there are some who wouldn’t honk if you hit them in the head with a hammer,” he said.

Over time, Smith has developed some fans who have actually stopped and visited with him.

“People from Colorado and Texas, they’re passing through and stop to talk,” he said. “They’ll drive by, go down the road, turn around and come back. We’ll talk, and they like to take pictures of me and Old Yeller.”

Sometimes he entertains them by yodeling with the dog. Actually, Smith yodels and Old Yeller, with eyes wide open and ears up, howls.

In addition to sharing hospitality, Smith has witnessed sad events. There have been a number of wrecks along the stretch of road just south of Little Cypress Creek and a mile or so from the highway’s intersection with Arkansas 64. In one instance, a man speeding north crossed the road and struck a tree on his property. The man died. “I was in the house when that happened,” he said.

One of his fondest encounters, he said, happened early one morning when a woman driving by slowed down as she drove by. He saw that she was bald and wondered to himself if she were a cancer patient.

When not working around his house, Smith said he has a coon dog and likes to go hunting. He also visits friends, including an elderly acquaintance in Cabot who doesn’t drive and often needs someone to drive her into Little Rock.

“If you drive in downtown Little Rock you’d better be sharp,” he said. “I ain’t too smart, but I know how to get out of the way.”

So, if you’re ever up in White County, just south of El Paso on Arkansas 5, look for Smith and Old Yeller sitting and watching. Be sure to honk or wave.