Chances are you’ve never heard the songs “Don’t Sing Love Songs, You’ll Wake My Mother,” “Life’s Railway to Heaven,” or “The Boy That Burned in the Berryville Jail” unless you listen to Ozark Highlands Radio.

Forty weeks a year for the past three years, music from the Ozarks has filled the soundwaves, broadcasting to 16 radio stations as close as Arkansas and as far away as Alaska. 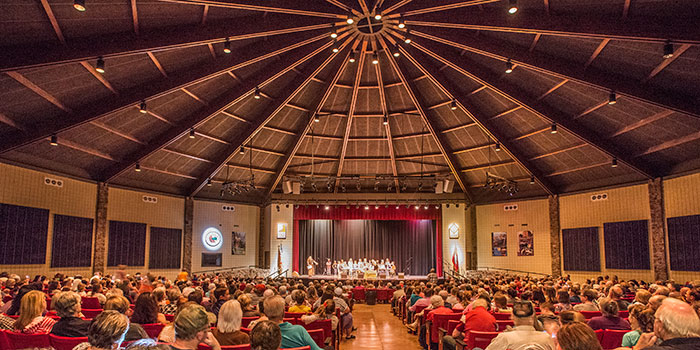 Each show has a “feature host” segment, taking listeners on a musical journey with historians, authors and personalities who explore the people, stories and history of the Ozark region.

The mission statement of Ozark Highlands Radio: “To promote and preserve the music and traditions of the Ozarks, through radio and emerging media, inviting a dynamic audience to explore.”

One of the brains behind the broadcast is Darin Dortin, the center’s music director and executive producer of the radio program. He began his career as a sound engineer for the center’s live shows.

“I quickly saw the potential of creating a program using the nightly performances the park was already producing,” Dortin said. “Coupled with the vast catalog of archive material the park had, recordings dating back to the early ’70s, the idea of the radio program was born.” 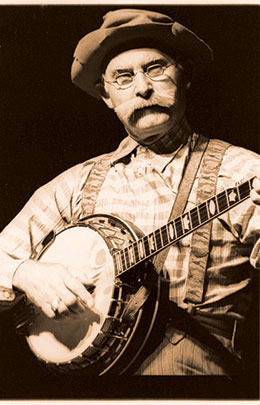 One of the show’s most popular segments features Mark Jones, son of the late Louis “Grandpa” Jones and his wife, Ramona. Grandpa Jones, a banjo player, gospel singer and comedian, was a regular cast member on the popular Hee Haw television series for many years. In his later years, Jones settled with his family in Mountain View and operated a dinner theater.

The segment, “From the Vault,” is introduced by the show’s host, Dave Smith; followed by sound effects of a creaky door opening and footsteps going downstairs.
“I always like stepping down in the vault to visit with my buddy Mark Jones,” Smith said.

“Mark has a great sense of humor and has great stories about so many of the musicians who played here and are no longer with us,“ Dortin said.

Producer Jeff Glover engineers the radio program and handles the sound chores at the live performances. He is a trained recording engineer. Like most everyone else in Mountain View, he’s a musician. His instrument, the trumpet, is not in heavy demand for most of the local folk and bluegrass music.

John Morrow, park superintendent at the Ozark Folk Center has been on board since the idea for the program was conceived.

“I have always viewed this to be a natural extension of what we do here,” Morrow said. “Our mission is to perpetuate, present and promote the Ozark way of life. Ozark Highlands Radio is a fantastic way to meet that mission.”

Morrow said most parks feature a resource such as a lake or mountain or a historic site of some type. “In this park, that resource is the people of the Ozarks,” he said. “A large part of our culture is the music that has permeated this region for centuries. What makes my job different is the challenges we face and the equipment we require to bring our resources to the visitor.”

With 40 years of archives and the ongoing concert series, there seems to be an endless supply of program material, Morrow said.

“We have been committed to the music for 45 years now,” he said, “and while there are constant adjustments and interpretations, the traditional music of the Ozarks remains at the core of what we do. Ozark Highlands Radio is a natural extension of the program, and is only increasing in popularity. State parks are often said to be in the forever business, and this is no exception.”

The show’s popularity is increasing, and expanding to more radio stations. Nearly all of the funding for the program comes from the Arkansas Department of Parks and Tourism, and from an underwriting grant from the Committee of 100, a volunteer support group for the center, and Stone Bank.

For a complete list of stations carrying the broadcast and archives of over 80 programs, including full, unedited live concerts and interviews with the artists,  click here.

Neal Moore is a freelance writer and public relations and advertising consultant.