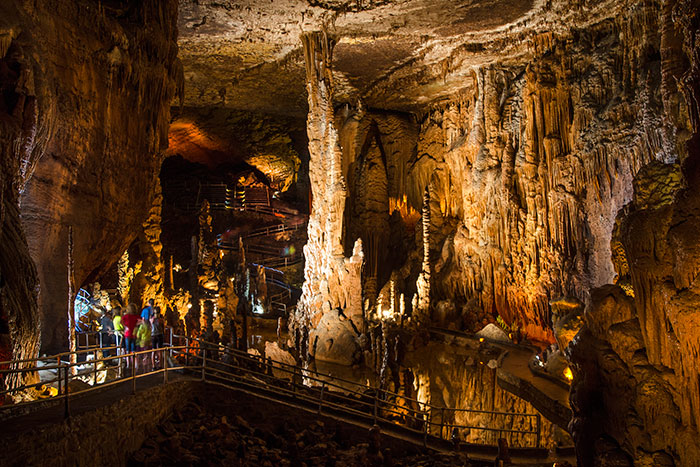 Blanchard Springs Caverns in Mountain View has three levels of caverns, with three guided tours designed for various levels of fitness and activity.

It is 80 degrees and sunny on the steps that lead to the entrance to Blanchard Springs Caverns. The equivalent of 21 stories below, where the public tour begins, it’s 58 degrees and dark.

“Are you ready for an adventure?” Tracy Wiley, a guide with the U.S. Forest Service, asks the 18 explorers in sweatshirts and jackets who have paid $10 each to experience The Discovery Trail, one of two guided tours offered to the public numerous times daily.

Wiley, who has been a tour guide at the caverns for two years, reminds the group that what they are about to enter is “a living cave” and home to “80 to 100 documented critters,” including a variety of salamanders and four types of bats.

After a short elevator ride down, about 220 feet, and a moment to adjust their eyes, Wiley leads the group into an immense room that is nearly as long as four football fields and has a spectacular domed ceiling.

It’s the Cathedral Room, one of the most popular spots in Blanchard Springs Caverns. 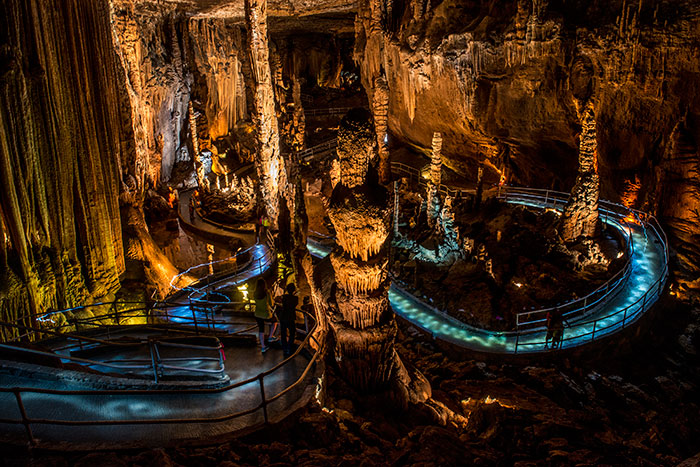 Keith Symanowitz, another tour guide, says concerts are often held in the Cathedral Room, including the annual Caroling in the Caverns between Thanksgiving and Christmas. “It has great acoustics,” he says.

Blanchard Springs Caverns is a three-level limestone cave system in the Ozark-St. Francis National Forests, about 15 miles north of Mountain View in Stone County.  Two of the levels are open daily for public guided tours. A third tour, the Wild Cave Tour, available by reservation only, is much more physically demanding and involves going into undeveloped sections of the cave. 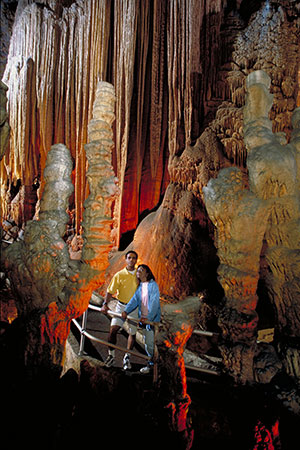 Paths lined with guardrails protect visitors from steep falls on the Discovery and Dripstone Trails.

The Dripstone Trail, the easiest for visitors, runs through the uppermost level of the caverns for about a half a mile on paved trails. It opened for public tours in 1973 and is open year-round.

The Discovery Trail, where Wiley and Symanowitz are leading the group, opened in 1977 and loops through a 1.2-mile section of the cavern on paved trails. It is only open during the summer, and the 90-minute walk is strenuous at times, with about 700 steps. A stretch near the end has become known as “heart attack hill” because of roughly 75 steps that seem almost straight up.

The underground tour should perhaps be called the Reverse Discovery Trail. Contemporary visitors are guided from rooms discovered more recently to parts of the cave that were explored before and after the U.S. Forest Service purchased 160 acres from John Blanchard in 1908.

“We’re actually going into the cave backwards from the way the earliest explorers came,” Wiley says, adding that the Cathedral Room, unknown until 54 years ago, is near the beginning of the tour, and the natural entrance to the caverns, where explorers entered, is near the end. 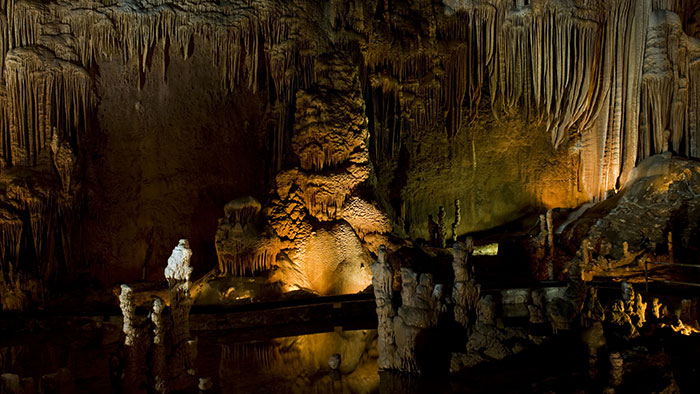 During this trip back through time, visitors descend to one of the lowest parts of the cave, 290 feet underground. They walk through what was a stream bed millions of years ago. Marvelous rock formations are visible along the way, and Wiley notes marks along the wall known as “scallops.”

“When you see small ones like it that means the water was flowing fast,” she says. “In other areas, big scallops mean the water was deep and flowing slowly, like a stream that meanders through.”

Some of the rock formations seen include rimstone dams, which create the various pools in the caverns, and flowstones, nearly smooth deposits of calcite or other minerals formed by water flows down the wall or along the floor cave. The Giant Flowstone, where visitors are provided rows of benches to sit and view, is one of the biggest in the United States at 160 feet long, 35 feet tall and 30 feet thick. 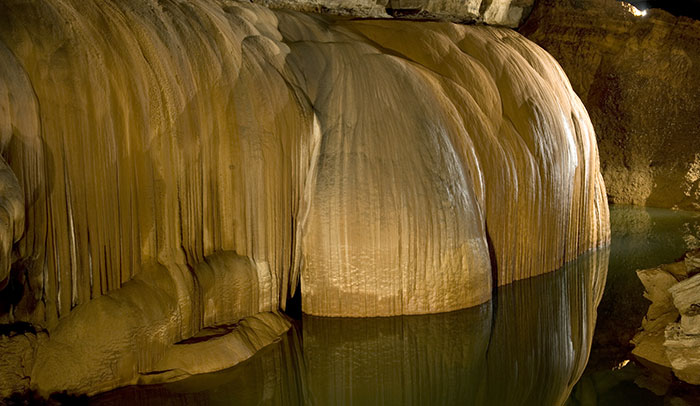 The Giant Flowstone at Blanchard Springs

While on the walking path, Wiley not only explains various formations in the cave but also answers questions.
Jeram, 10, who is visiting with his grandparents from Kansas, listens with interest to an explanation of the difference between stalactites, rock formations that hang from the cave and stalagmites, formations that rise from the floor. He tells Wiley that he once heard that someone yelling could make the stalactites fall.

“No, you can’t get a good enough vibration to get them to fall,” she replies.

People living in the region knew about the caverns — parts of them anyway — for decades, and the treacherous darkness had been visited long before white settlers. The only recorded visit in the 1930s was by a Forest Service employee who was lowered briefly into the entrance. The next recorded explorers visited the cave in the 1950s and 60s.

Wiley says the various rooms of the cave were discovered over a period of years as explorers with carbide lamps made their way farther and higher through tunnels and cracks. 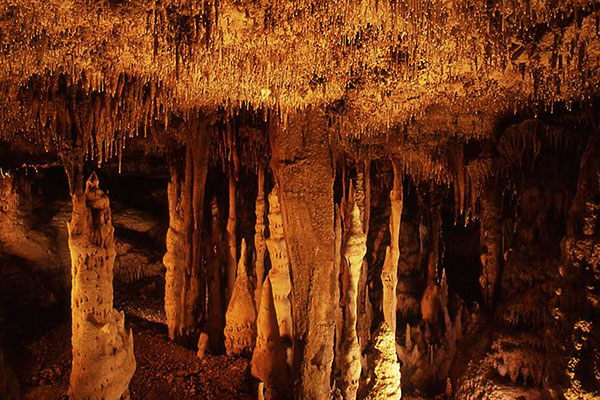 Stalactites hang down from the ceiling; stalagmites form from the ground up.

One by one, she says, spectacular rooms were discovered. The Christmas Room was named for its tree-shaped formations. The Ghost Room got its name from a large white flowstone that startled its discoverer.

Although they would not have called it graffiti, 20th-century cave explorers wrote their names on the walls in an area known as the campground. Names visible include Hail Bryant and his wife, Faye, and two young explorers, Robert Hanford and Mike Hill. 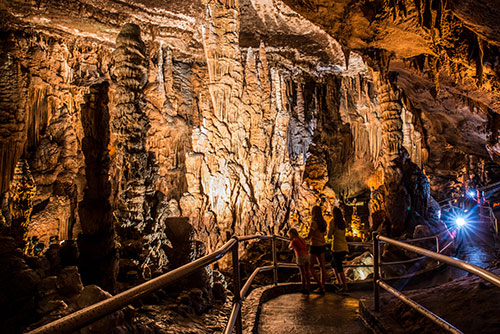 Around every winding curve are more discoveries to admire. Some points of the guided tours are about 300 feet below ground.

At the bottom of the Discovery Room, about 300 feet below the surface, Wiley uses a high-beam flashlight to point out a small opening, up to the left. Hanford and Hill, teenagers at the time, squeezed through that space on their way to discovering the Cathedral Room in 1963, Wiley says.

“That’s about a 100-foot hill up peanut-butter mud, thick and nasty,” Wiley says. “Imagine what it would have been like in this big old room and trying to do that.” 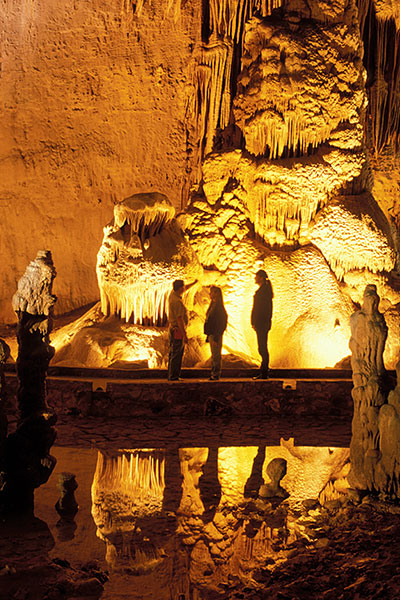 Guided tours of the cave are available several times daily, throughout the year.

It was the discovery of the Cathedral Room that persuaded the U.S. Forest Service to develop the caverns for public tours, Wiley says. That included hauling cement for walking trails and mixing it with gravel and water from inside the cave.

Handrails help the tour group make its way along the dimly lit path. A few bats flitter around; a faint odor of bat guano and a large pile of the bat waste are evidence that the cave is actually home to many more. About 372,000 bats — gray, Indiana, big brown and tri-colored — hibernate in the cave, Wiley says, and the guano is a good sign that healthy bats are sleeping or hibernating on the ceiling.

“We have a complete air exchange about every 24 to 36 hours in the cavern,” she says. One area was known by early explorers as a “wind tunnel” because air whipping through often extinguished their carbide lamps.

Today, visitors on the Discovery Trail walk underneath the natural entrance to the cave used by the early explorers. The old scaffolding and winch, used to lower equipment to build the trail, are still in place.

They see the rushing Blanchard Springs, which drains about 10 million gallons of water a day from a watershed of 16 square miles. About 4,000 feet of the underground passage where the springs flow through has been surveyed, while 1,000 feet of the passage is completely filled with water.

For more information call the Caverns at 870-757-2211 or visit blanchardsprings.org or www.fs.usda.gov.

Rob Moritz is a Little Rock-based journalist. Casey Crocker is a photographer for the Arkansas Department of Parks and Tourism.