According to a Chinese proverb, “Spring is sooner recognized by plants than by men.” 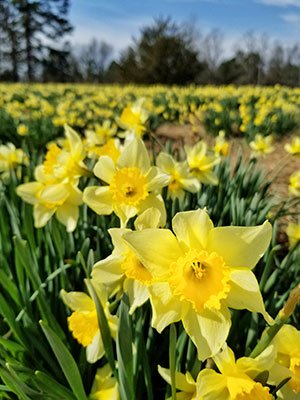 photo courtesy of Arkansas Department of Parks Heritage and Tourism

The Natural State version: Spring is sooner recognized by daffodils than by Arkansans.

It’s not until we’ve wearily hit our wintery wit’s end that we begin to notice the promising pops of green leaves and buoyant bursts of yellow blooms that signal sunnier times are finally here.

And aren’t we — who have weathered not only a cold winter but a worrisome pandemic — ready for a cheerier new season?

Some spring flower festivals, like the Jonquil Festival at Historic Washington State Park and the Camden Daffodil Festival, have canceled 2021 events due to the public health crisis.

But the 43rd annual Wye Mountain Daffodil Festival, hosted by the Wye Mountain United Methodist Church March 6-14, will take place, even if this year’s Bigelow event might not be as big.

Says Bobby Younger, festival marketing coordinator, “It’s going to be scaled-down,” operating under an approved plan by the Arkansas Department of Health. On festival weekends, there won’t be live music, and a smaller roster of craft and food vendors will be outside, not inside.

But while there may be fewer diversions, expect more daffodils dotting the festival’s seven acres than ever before.

“The last few years, we’ve been adding at least five new varieties every year,” Younger says. “So we’re up to approximately 45 different varieties.”

After all, it’s the frilly flowers — and their photo opportunities — that keep admirers coming back.

“People are ready after winter,” Younger says. “They’ve got the garden bug. They want to be outside.

Uniquely Arkansas is a monthly spotlight on something special in our state. Have a fun suggestion for a feature?
Email jennifer.cia@aeci.com.