Break out the bubbly — the Blackberry Pomegranate Sparkling Water, that is. Mountain Valley Spring Water celebrates its 150th birthday this year, even though, as its website (mountainvalleyspring.com) says, its water “has been naturally free-flowing inside our heartland for thousands of years.

“Its sacred source is tucked deep in the pristine wilderness of the Ouachitas, where we’ve been bottling it in glass to preserve its award-winning, mineral-rich taste, and the planet, since 1871.” 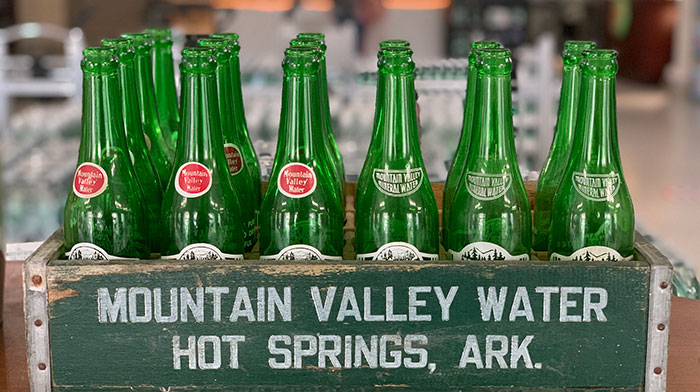 Mountain Valley Spring Water still comes in signature green glass, like these retro bottles on display at the Visitor Center.

Not quite as old is the Classical Revival Mountain Valley Water Visitor Center building. The National Register of Historic Places structure on Hot Springs’ Central Avenue, which was built in 1910, has served as the brand’s headquarters since the 1930s. The Visitor Center, where Mountain Valley Water sells spring water, sparkling water, flavored sparkling water (in the aforementioned Blackberry Pomegranate as well as 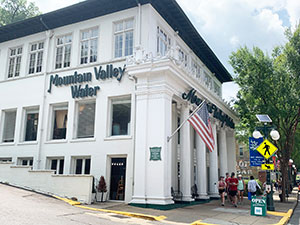 Key Lime Twist and White Peach varieties) and other merchandise, is a great source of hydration as well as history.

The center’s second floor is a free museum of all things Mountain Valley, originally founded as “Lockett’s Spring Water” (after the family who once owned the spring). Rusted signs and retro bottles, mostly in Mountain Valley’s classic kelly green, mingle with old advertisements (“Wake Up Your Kidneys Every Morning!”) and a historical timeline (“1871: Greene family purchases land and begins to market water; changes product name to ‘Mountain Valley’ after nearby town”).

Mountain Valley, the first bottled water to be available coast to coast, has been enjoyed by everyone, from sports greats (Babe Ruth and Muhammed Ali) to government officials (including presidents since Calvin Coolidge and U.S. senators since the 1920s) and celebrities (“everyone in show business from Gloria Swanson and Frank Sinatra to Elvis Presley and Mick Jagger” and “on screen with Tom Cruise, Demi Moore, Paul Reiser, Kirstie Alley and more” according to museum placards).

In October, Mountain Valley will host a weekend of events in conjunction with the Hot Springs Documentary Film Festival, including a community block party and citywide bike parade. And at mountainvalley150years.com, they’re sharing 150 stories about the brand.

Uniquely Arkansas is a recurring spotlight on something special in our state. Have a fun suggestion for a feature?
Email jennifer.cia@aeci.com.