Seventy-five years ago, on Sept. 2, 1945, a native Arkansan wearing five stars on his collar signed the Japanese surrender on the deck of the battleship USS Missouri to formally end World War II.

Gen. Douglas MacArthur’s prestige then ranked among the highest in America. And as the war concluded, 1,365 days after Japanese aircraft staged a surprise attack on Pearl Harbor, the lives of Arkansans along with the rest of the nation had been vastly transformed by the impacts of the global conflict. 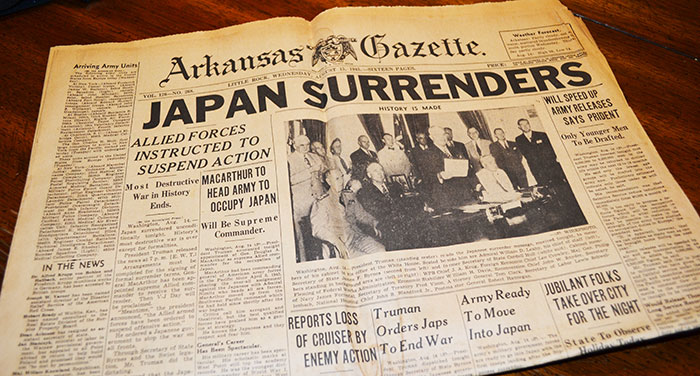 The number of Arkansans serving in U.S. armed forces against Japan, Germany and Italy totaled 195,645, about 10% of the state’s population. Those killed in action numbered 3,519 by best count (including an uncle of this author), plus another 1,000 or more non-combat fatalities. Many thousands more were wounded.

Broken hearts and crippled dreams served as enduring legacies. More widely unnerving were day-by-day anxieties about loved ones fighting abroad — at a time when the fastest overseas communication for ordinary Americans was slow, slow mail by ship.

Conversely, the war created brighter prospects for a good many Arkansans, including wider chances for work 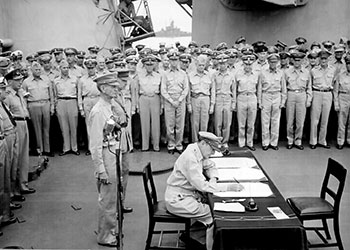 Gen. Douglas MacArthur presides at the Japanese surrender aboard the battleship USS Missouri on Sept. 2, 1945. Courtesy of Library of Congress

and fresher outlooks on life. Farming, the state’s principal endeavor, mechanized fast enough that the number of tractors more than doubled during the conflict.

“The scarcity of civilian men gave women the chance to enter the workforce in large numbers. More Black men could join the armed forces, even if segregation still prevailed.” 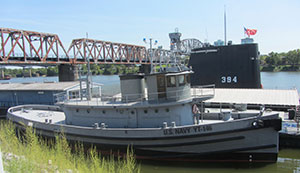 and Culture, “the immediate concern was dealing with the rationing of a great variety of consumer products. Most items were in short supply, and items such as new car tires became almost unobtainable. To provide additional food, many Arkansans in towns and cities planted Victory Gardens in any available space.”

From arsenal to museum

The MacArthur Museum of Military History occupies a massive mid-19th-century building with 3-foot-thick walls. It’s where the future Pacific Theater commander was born on Jan. 26, 1880, while his Army-captain father served at what was then the Little Rock Arsenal. The senior MacArthur was transferred to a Virginia base before his son turned 6 months old.

Although he was born in Little Rock, MacArthur always spoke of Virginia as his home state. He returned only once to Little Rock, for a four-hour visit on March 23, 1952. The rapid-fire tour included his former birth site (now the Tower Building) and the relocated Christ Episcopal Church, where he had been baptized 72 years previously.

Two rooms of the MacArthur Museum are devoted to the general’s life, including an exhibit about the Little Rock stop, when he spoke to a crowd estimated at 10,000 in the renamed MacArthur Park.

Other museum highlights include a World War II Willys Jeep, extolled in a nostalgia-stirring exhibit, “The Sun Never Sets on the Mighty Jeep,” and a fascinating display, “Through the Camera’s Eye: The Allison Collection of World War II Photographs.” This collection of wire-service photo prints, saved from discarding by a Houston newspaperman, includes a playful photograph of Arkansans Lt. G.C. Smythe from Marshall and Sgt. Russell V. White from Harrison, along with three other U.S. Army troops.

McAteer says the 75 or so images on display are popular “because they convey a sense of place that was really extraordinary for the 1940s. Today, we think nothing of war images being conveyed into our lives on a daily, almost instant basis.

“In World War II, this was extraordinary. Even though the black-and-white photographs may lack the emotional impact of today’s color imagery, they do represent the first time Americans had such an up-close-and-personal connection with the war.”

The role of Arkansans in World War II is the focus of other military museums around the state. And many county 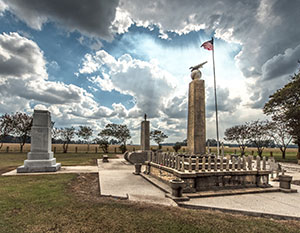 museums have at least an alcove with local memorabilia from the global fighting.

Among the sites revisiting 1941-1945 are: the Inland Maritime Museum in North Little Rock; the Arkansas National Guard Museum in North Little Rock; the Jacksonville Museum of Military History; the Darby House (boyhood home of renowned “Darby’s Rangers” Gen. William O. Darby) in Fort Smith; Wings of Honor museum in Walnut Ridge; the Arkansas Air and Military Museum in Fayetteville; and the Museum of Veterans and Military History in Vilonia. Opening times and other information can be found online; hours may be affected by the COVID-19 pandemic.

The war brought a substantial number of outsiders to Arkansas, then an insular state known as “The Land of Opportunity.” Many arrived against their will, including 16,000 Japanese American detainees confined to Rohwer and Jerome internment camps, along with 23,000 German and Italian prisoners of war captured mainly in North Africa in 1943. To learn more about the internment camps, visit the World War II Japanese American Internment Museum in McGehee. 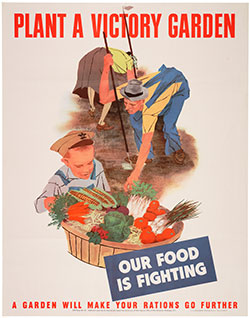 Americans were encouraged to grow backyard gardens known as “Victory Gardens” to help with the war effort. National Archives

(Germany’s May 9 surrender) and V-J Day (Japan’s capitulation after the two atomic bombings). V-J Day is marked Aug. 15 in England, Sept. 2 in the United States.

Through all the confusing changes and financial hardship, Arkansans showed a notable generosity toward the national effort to defeat the Axis powers. During those 1,365 days, Arkansans ranked No. 12 among residents of the 48 states in per capita contributions to the public drives for purchasing vital war bonds.

That showed genuine patriotism, supporting the one out of 10 fellow citizens in uniform. Benjamin Haymon of Hot Springs, who had been the state’s oldest World War II veteran at age 110, died last December. About 3,000 of his peers remain alive, in their early 90s and up. They all continue to merit full respect from the rest of us.

Arkansans joined the rest of the nation and the world in celebrating the end of WWII. But the celebrations 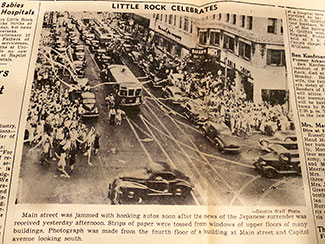 quickly gave way to getting back to work to rebuild lives and communities. Most veterans were ready to put the war behind them. In a 2015 interview with Arkansas Living, Grace Jolly of Greenbrier, whose husband, Doyle, served in the Army in Europe during the war, recalled how happy she was on V-J Day.

“We rejoiced and all,” she said. “We had only been married three months when he left. I was so tired of being a ‘widow’ woman. He had a 3-year-old son he had only seen twice. I was ready to be married.”

Once he returned home, the couple began working the family farm. At the time, they raised cotton and other row crops as well as cattle. “He bought me a hoe when we got married, and I went to hoeing cotton on Monday morning,” she said. “He started hoeing cotton when he came back.”

The uncle I never had

My uncle, Edward Spilker, born and brought up in a financially straitened farm family near Stuttgart, was among 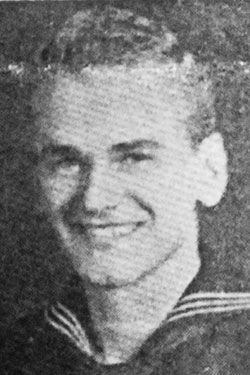 the 3,519 Arkansans who died in combat during World War II. A Naval aviator, age 21, he vanished at sea on a Pacific scouting mission three months after I was born in 1943.

Edward, the youngest among my widowed grandmother Mary’s seven children, could have been a poster boy for the lasting grief of wartime loss. His death struck her so hard that she spent more than a month cloistered in her Stuttgart bungalow’s sole bedroom. During my boyhood in St. Charles, Missouri, his death was never mentioned when she visited.

I still think of Edward as the uncle I never had. And I still remember the tears my mother, Martha, would shed each Memorial Day evening as she lamented the future life her baby brother never got to enjoy. The weeping came after our church had celebrated the holiday with its annual parade, picnic and patriotic ceremonies.

The first Navy telegram received by my grandmother in Stuttgart reported that Aviation Radioman Third Class Edward Henry John Spilker had gone missing at sea on Sept. 21, 1943. A year later, another telegram declared him dead.

Until her own death in 1958, my grandmother cherished a framed certificate that hung on her living room wall. Emblazoned with the Great Seal of the United States, it bore the signature of President Franklin D. Roosevelt. Its words, while rote, were by no means unmoving:

“In grateful memory of Edward Henry John Spilker. He stands in an unbroken line of patriots who have dared to die that freedom might live. Freedom lives. And through it, he does — in a way that humbles the undertakings of most men.”

Sheila Yount contributed to this article.