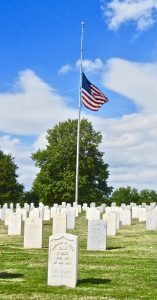 Toward the end of May, flags and flowers will decorate many of the more than 60,000 graves at the five dedicated veterans’ cemeteries in Arkansas.

A large majority of these honored men and women survived their military service, whether in war or peace. But their deaths, sometimes decades later among loving families, still deserve the full respect of fellow Americans. That homage is spotlighted each year on two occasions: Memorial Day (May 30 this year) and Veterans Day (Nov. 11).

The five cemeteries share an air of solemn serenity due to those who set aside their normal civilian lives to become either volunteers or draftees joining the Army, Navy, Marines, Air Force or Coast Guard.

Burial or columbarium interment is open to all service members who died on active duty, to veterans (except those dishonorably discharged), and to spouses and minor children of veterans.

There’s a gap of many decades between the founding of Arkansas’ three federally administered military cemeteries, established just after the Civil War, and their two state-operated equivalents, opened earlier this century.

When Fayetteville National Cemetery was dedicated in 1867, its main purpose was the proper burial of Union casualties from 1862’s bloody nearby battles of Pea Ridge and Prairie Grove. Sections denoted troops from Arkansas, Illinois, Indiana, Iowa, Kansas and Missouri, as well as “Indian” soldiers.

In the original plan, the burials formed a circular pattern around a flagpole, with paths between sections forming a six-pointed star. Just inside the main entrance at 700 Government Ave., today’s visitors see a carillon placed in 2000 by the Military Order of the Purple Heart Service Foundation.

Fort Smith National Cemetery, also dating to 1867, is the burial site for one of Arkansas’ military heroes, World War II Brigadier General William O. Darby. Commander of the elite “Darby’s Rangers,” unit, he was killed in action on April 30, 1945, in Italy. 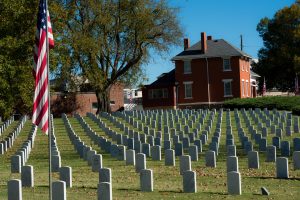 Fort Smith National Cemetery is one of three such federally administered properties in Arkansas.

Along with all the U.S. veterans, the Fort Smith cemetery contains the graves of 473 Confederate soldiers. On the grounds at 522 Garland St. stands the Memorial to the Unknown Confederate Dead, also honoring two of the South’s brigadier generals: James McIntosh, killed at Pea Ridge, and Alexander Steen, who died at Prairie Grove. 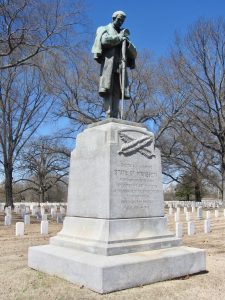 Little Rock National Cemetery, opened in 1868 to relocate the graves of 5,400 Union dead from across the state, likewise has a Confederate section. Dedicated in 1884, it received the remains of 640 Southern dead from Mount Holly Cemetery. Most headstones are marked “Unknown Confederate Soldier.”

The most prominent marker at the cemetery, 2523 Springer Blvd., is the 16-foot-tall Minnesota

Monument, dedicated in 1916 in memory of that state’s 36 Civil War fatalities buried on the site. It is listed on the National Register of Historic Places.

Only in 1997 did the General Assembly authorize the creation of Arkansas State Veterans Cemetery at North Little Rock, which opened to burials in 2001 at 1501 W. Maryland Ave. A large plaque displays the Gettysburg Address that Abraham Lincoln delivered at that cemetery’s dedication in 1863. His 272 words fill just 14 lines of large type, including this memorable passage: 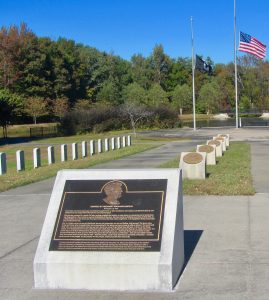 “The brave men, living and dead, who struggled here have consecrated it, far above our poor power

to add or detract. The world will little note nor long remember what we say here, but it can never forget what they did here.”

Arkansas State Veterans Cemetery at Birdeye is distinctive for its bucolic setting in a tiny Cross County community, 120 miles northeast of Little Rock. It opened in 2012, partly to ease demand for burial space at the North Little Rock location.

A striking feature at Birdeye is the architecture of the welcome center and the outdoor committal shelter where services are held. The cemetery’s website describes the welcome center as “organized around a central entrance canopy that opens up, welcoming visitors into the space in a respectful way.” 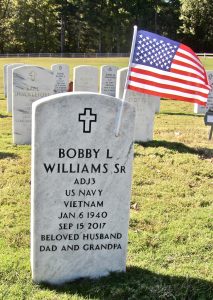 At all five cemeteries, one pleasure of strolling among the expanses of mostly identical headstones is reading the personal messages occasionally engraved. The sentiments often speak to love, with an amusing flourish every now and then.

At Birdeye, Navy veteran Bobby L. Williams Sr. is saluted as “Beloved Husband, Dad and Grandpa.” Dennis White, an Army veteran, gets praise as a man who “Served God, Country and Family.” Gayle Harry Cox, a helicopter pilot in Vietnam, is lauded for his valor: “Via God and his Chinook, he left not one behind.”

Jack Schnedler is an Army veteran. He served as an information specialist in 1967-68, stationed at Fort Knox, Kentucky.