The Arkansas State Veterans Cemetery at Birdeye received national recognition Aug. 10 at a ceremony marking its top ranking among the nation’s state veterans cemeteries. Randy Reeves, a career cemetery director who serves as the U.S. Department of Veterans Affairs undersecretary for memorial affairs, came to Arkansas to award the national Operational Excellence designation to the cemetery staff.

The Arkansas State Veterans Cemetery at Birdeye received national recognition for its pristine conditions and excellent service to veterans and their families. To date, 389 people have been interred here. photo Jenny Boulden

The 100-acre cemetery, founded in 2012 following a grass-roots effort by northeast Arkansas residents to establish a resting place for the area’s veterans, is located east of Cherry Valley in Cross County, and is available to all state veterans.

Reeves explained that the national cemetery inspections program was recently revamped ­— the Operational Excellence award replaces the former “Shrine” designation-—so the scores being awarded were from 2016. Reeves said that because there was such a lag between the inspections and the awards, he directed his field staff to re-evaluate the top-scorers to determine if they still met the standard. He told the crowd, “They came back to me and said, ‘Well, sir, it turns out things are a little different at Birdeye.’ I said, ‘Oh, have they slipped, then?’ And they said, “No, sir— they’re even better!”

Reeves said that while the cemetery had scored 94 out of 100, one of the four top scores in the United States out of 111 state veterans’ cemeteries, if the evaluations were held now, Birdeye would score even higher. “The conditions here are pristine, the staff interacts with families at the top levels we could ask, and the cemetery honors our veterans with the dignity and sacred honor they deserve,” Reeves said. “They’re doing everything right.”

Reeves told Arkansas Living that the night before, he and his wife (a Jacksonville native) visited the cemetery. “The feeling I had when I drove in the gates was awe,” he said. “That’s what I’m always looking for when I visit cemeteries, and this one hit me right away. They’re executing our nation’s standards at the ideal level. I feel privileged to get to see it.” 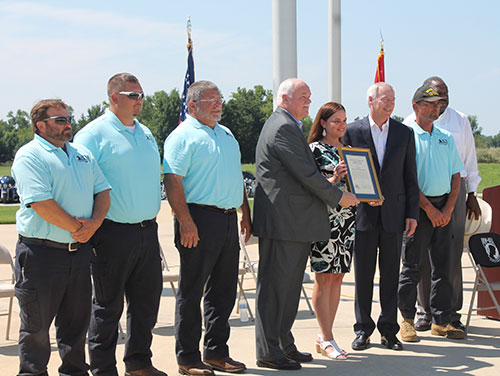 Gov. Asa Hutchinson, several other elected officials and more than 100 area residents also attended the ceremony, held in front of a reflecting pond surrounded by the cemetery’s signature lush turf. Hutchinson told Arkansas Living, “Our veterans cemeteries are very important, obviously, for our veterans, that they have that option if they want to be buried with their fellow comrades who served our nation. But it’s also important for the public to have a place of recognition for those who have served and given so much for our freedoms. Today, the fact that the state veterans cemetery in Birdeye is being recognized is really a tribute to the pristine condition it’s in, how well it’s maintained, that it meets the highest standards of our Department of Veterans Affairs in Washington. It brings honor to our state and is an example of the commitment we have to our veterans in Arkansas.”

Roy Dozier of Parkin is one of those veterans who attended the ceremony. Dozier, a Marine Corps veteran of the Vietnam War, serves on the Cross County Veterans Committee. “This is our baby. It’s a beautiful place. Someone was just saying, ‘this used to be a cow pasture.’ But this is what you can do,” he said, gesturing at the grounds. “I tell people all you have to do is maintain the earth, and it will look good no matter where you are.” Dozier said he’s already reserved his plot at the cemetery. “This is where I plan to be.”

Reeves said that the Department of Veterans Affairs has a goal of within two years having a “dignified burial site” within 75 miles of 95 percent of the nations’ veterans. “In Arkansas, you’re already at 95 percent, thanks to Birdeye,” Reeves said. [The state’s other veterans cemetery is in North Little Rock.]

The Board of Directors for Arkansas Electric Cooperatives, Inc. (AECI), the statewide service organization of Arkansas’ electric co-ops and publisher of Arkansas Living, elected new officers at the AECI Annual Meeting on July 24. They are:

The Calico Rock School District special education teacher received the award earlier this year in a surprise event at the school’s gymnasium. During the presentation, students and faculty gave her two standing ovations. She was presented with a crystal apple award and a check for $1,000 from the Electric Cooperatives of Arkansas, which have sponsored the program since