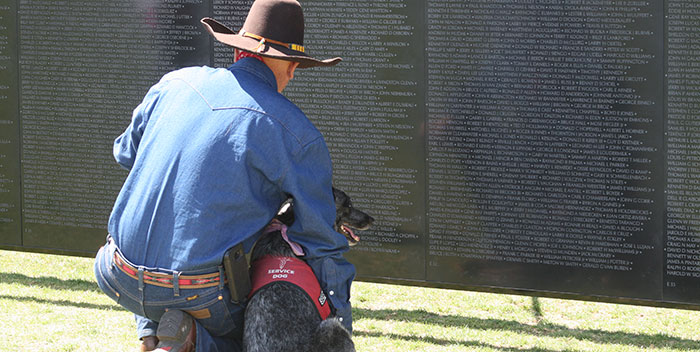 At 375 feet long, The Wall That Heals, a three-quarter-scale replica of the Vietnam Veterans Memorial in Washington, D.C., is made of solid synthetic granite.

Yet, it has a way of making hearts soft.

Vietnam veteran Kenny Wright of Paragould has visited the touring Wall — etched with the names of more than 58,000 Americans who died — several times, each of them moving.

“We were a bunch of kids; I was 18 years old when I was in Vietnam,” says Wright, who is originally from Kentucky and served in the Army from 1967 to 1968 as a combat engineer. “And when you go up there and you touch that Wall, there’s just something about it.  … That is the reason you’ll see so many Vietnam veterans when they go there, they just break down.

“They’re just sobbing uncontrollably because it takes them back to that time, and they see those individuals who aren’t with us anymore.”

This month, Paragould and Bentonville will host The Wall That Heals and its mobile education center. It’s notable that 34 U.S. cities this year were selected to display The Wall, and two are in the northern part of the state.

From May 23-May 27 (Memorial Day), Downtown Bentonville Inc. will present The Wall at a field near Crystal Bridges Museum of American Art and the Scott Family Amazeum.

Then, from May 30-June 2, The Wall will be set up in Paragould at Harmon Playfield.

All members of the public are encouraged to attend, and admission is free. 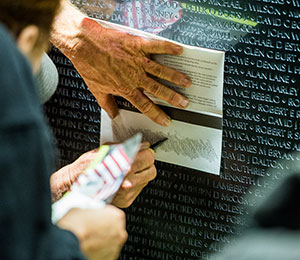 Visitors are invited to make pencil rubbings of names on The Wall That Heals, which will visit Bentonville and Paragould this month. photo courtesy of Vietnam Veterans Memorial

Wright says having The Wall in Arkansas “will be our chance to get with other veterans and just be a time of coming together. They call it The Wall That Heals for a reason; we’re trying to heal some old wounds that happened 50 years ago.”

Healing, after all, is a personal mission for Wright, who is president of the Veterans Support Association — a 5-year-old nonprofit group that gives gifts, from robes to plaques, to veterans in nursing homes.

“We’ll have a lot of people standing by,” Wright says. “If someone has an emotional moment, if they need assistance, we’ll be there to pray for them or just to help them or leave them alone — ever which way they choose. But we’ll have people on site to do that.”

On site 24 hours a day. After all, illuminated by LED lighting, The Wall remains open around the clock.

The Wall That Heals: www.vvmf.org