First thing to know, there are no woolly mammoths in Mammoth Spring. The mammoth in the name of the Arkansas town, population 977, and the nearby Arkansas state park refers to the enormous size of its natural spring, one of the world’s largest. For generations, the sparkling water has been pulling tourists toward Mammoth Spring, located at the Arkansas-Missouri border. The small but lively town’s charms enhance Mammoth Spring State Park’s attractions, enticing visitors to stick around and explore the historic town and enjoy the Spring River that flows from Mammoth Spring’s headwaters. 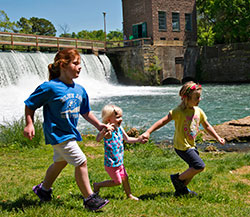 On pretty days you are sure to see families frolicking and picnicking in the park.-ARKANSAS DEPARTMENT OF PARKS AND TOURISM

Among Mammoth Spring’s claims to fame is being home to Arkansas’ oldest railroad depot. In the days when rail was the primary mode of travel, throngs of tourists would pour out of trains onto the platform, eager to experience the fresh Ozark air and storied spring waters. Mammoth Spring State Park has preserved much of that history for the thousands of visitors who still make their way to the town. Meg Matthews, public information coordinator with Arkansas State Parks, said that last year the park attracted about 380,000 visitors. Like the state park, several of the local tourist attractions are free, making this an especially affordable getaway.

Walking along the top of the spillway gives a vivid perspective of the spring’s power.  -Dean Curtis

“Mammoth Spring State Park is unique in that it is the only National Natural Landmark in Arkansas,” Matthews said. “It has been given this special designation due to the amazing natural spring located 80 feet below water level. Mammoth Spring flows an average rate of nearly 10 million gallons per hour, with a constant water temperature of 58 degrees. This water forms the Spring River, one of the state’s most popular places to fish for trout and float downstream.”

Of course, Native Americans inhabited the area and had a connection to the site long before European settlers arrived. Local legend says the spring emerged when a Native American chief was digging a grave for his son, who had died searching for water during a drought. According to folklore, the spring will gush forever in honor of the young man.

That powerful natural resource made it the obvious site for Arkansas settlers to build a grist mill in the 1800s, which was the beginning of the town. Then, in 1886 The Kansas City, Fort Scott & Memphis Railroad started service through Mammoth Spring, and the town boomed. The depot, later leased to Mammoth Spring State Park, was remodeled for the opening of the park in the early 1970s and fully restored in the 1990s. It is now a must-see attraction full of exhibits, and many visitors’ first stop.

Inside the red Victorian-era depot, lifelike, custom-sculpted figures depict the train crew, depot crew and train passengers of the early 1900s. Short audio presentations enhance the exhibits; don’t skip them. Museum staff offer free tours, which are helpful. With so much to take in, the guides can highlight fascinating details visitors might otherwise miss.

On one of these tours, Museum Program Assistant David Parker shows visitors the ornate capitals on the breezeway’s columns, shaped like fish, muskrat and frogs, animals plentiful in the area.

The state park’s depot museum includes fascinating memorabilia: a black safe from Mammoth Spring Milling Company, a color blindness test all railroad employees had to pass, a telegraph machine and a pot-bellied stove. There are antique luggage carts, milk jugs, suitcases and other cargo from the period.

Black-and-white photos and yellowed newspaper clippings pepper the exhibits. When the local economy thrived, this town was home to the Nettleton, the largest hotel between Memphis and Springfield, Missouri which boasted having hot and cold water, says Parker, noting the hotel burned down in 1933. Another rival hotel was the Culp, which had sample rooms for traveling salesmen who could come into town and set up their wares.

Part of the museum tells of the work that used to be done on the trains and in the depot. The train had 20 cars and five crew members. The fireman had one of the hardest jobs, shoveling hot coals 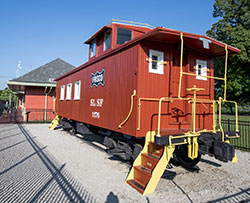 Outside the depot, visitors can explore the red caboose, inside and out.-Dean Curtis

into the boiler and tending to the furnace to keep the train chugging along. The engineer ran the locomotive. There were rear and front brakemen, whose jobs were dangerous because they had to go from car to car to set the brakes. The most coveted job was the conductor, the boss of the train, given to a senior employee who’d been with the railroad for years, Parker explained.

Outside, Parker noted long yellow sticks near the railroad tracks, used to hand off messages to the train engineer if the train did not stop. There’s also a caboose parked outside that children especially love to explore.

Discoveries on the grounds

After a tour, be sure to stroll around the park grounds. Outside, you’ll find remnants of a dam, a 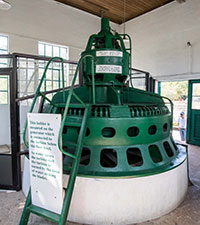 mill, a hydroelectric plant, picnic facilities, a playground and an Arkansas Welcome Center. In warmer months (April – September), pedal boats and kayaks are available for rent.

People gravitate toward the dam, which was built in 1887-1888, every stone hand-quarried by 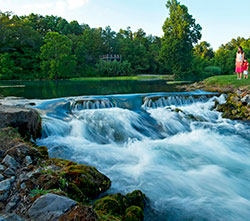 The largest spring in Arkansas is at the heart of beautiful Mammoth Spring State Park. -ARKANSAS DEPARTMENT OF PARKS AND TOURISM.

Mammoth Spring Milling Company. It’s amazing to realize each stone was put into place without mechanical help. Stand on the bridge above the dam and listen to the roar of water gushing just below your feet, and maybe feel a slight mist on your face.

A walk around Lake Mammoth Spring can be rejuvenating. You can’t actually see the spring,since it is 80 feet below water, but you’ll know you’re nearing it when you see a small cascade of water in the lake. Take time to read the historical markers around the lake for more of the area’s story. If it’s a warm spring day, you’ll find couples or families picnicking on the shores. Watch out, though: the lake’s geese will try to invite themselves to your picnic.

Hatching fish for more than a century 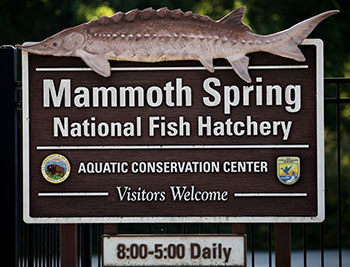 Adjacent to the park is another of the town’s bragging points, Mammoth Spring National Fish Hatchery and Aquatic Conservation Center. Established in 1903, the federal hatchery is the oldest in the nation. Admission is free, and it’s a popular educational attraction worth visiting. 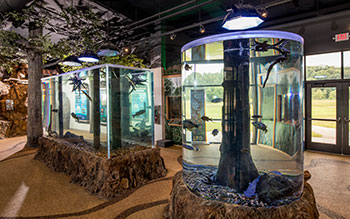 Mammoth Spring National Fish Hatchery has been designed to be accessible to the public for free educational tours. -Dean Curtis

Inside, there are a variety of well-stocked aquariums. When you enter, you’ll first encounter a pond stocked with colorful fish, a lovely waterfall and a bridge leading toward your tour. Tap one of the interactive screens to learn about Arkansas’ aquatic creatures and wildlife. Plan to spend 45 minutes to an hour inside appreciating the facility’s mission and Arkansas’ natural wonders.

Because of the spring’s characteristics, fishing is one of Mammoth Spring’s top draws.-ARKANSAS DEPARTMENT OF PARKS AND TOURISM 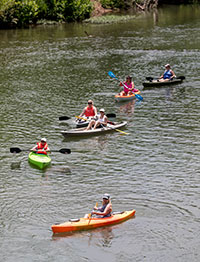 Floating the Spring River is an Arkansas pastime all year.-Dean Curtis

Outdoor enthusiasts across the state are aware of the Spring River’s reputation as one of the best spots for fishing and other recreational sports. The water is clear, and the constant flow from the spring results in one of the best year-round floating destinations, even in summer when water levels can drop. It’s a pristine spot to encounter some of the prettiest areas of The Natural State, so there are ample outfitters in the area to assist with a float or fishing trip.

Grab an oar and float past hardwood forests and rocky bluffs to tackle the occasional whitewater rapids. Or grab a reel because the cool water temperature is ideal for trout; this is known as some of the best trout and walleye fishing in the state. Walleye is best in the lower reaches of the river.

The water is cold enough to support a healthy trout population for 10 miles downstream.
Fly fishing is also popular on this river.

The Arkansas Department of Parks and Tourism advises the 3-mile stretch from Mammoth Spring to Dam 3 is ideal for wading or fishing from the bank, except for the deep section near the dam, which is better for boat fishing. The first 3 miles below Dam 3 provide the best action and the biggest fish, as 1- to 3-pound rainbows are fairly common. 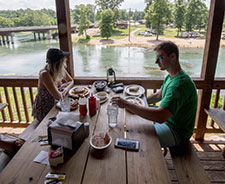 One of several great restaurants in town, Wood’s Riverbend Restaurant, has a fabulous view.-Dean Curtis

Founded with tourism and commerce at its heart, the town of Mammoth Spring has charms of its own. Historic Main Street’s quaint shops, antique stores and delicious restaurants are the center of it all.

If you are staying overnight or longer, you have options. In and around Mammoth Spring are several motels and campgrounds. You’ll even find the Roseland Inn Bed & Breakfast listed on the National Register of Historic Places. For help planning a trip, visit mammothspring.org or arkansasstateparks.com.