If it seems like you’re hearing more about the importance of vitamin D lately, you’re not mistaken. More and more Americans are becoming deficient in this vital nutrient, even as doctors and scientists are learning more about its importance.

“It affects nearly every cell and system in the whole body,” said Dr. Nadine Alex of Alex Endocrine Associates in Rogers. “It codes for hundreds of genes, so it literally has hundreds of thousands of roles.”

In 2010, a survey by the Centers for Disease Control and Prevention showed that vitamin D insufficiency had nearly doubled in the U.S. since the previous decade. More than three-fourths of the population were deficient — surprising results that stimulated even more research.

“There’s been a huge interest in it, especially over the past eight years. It’s an incredibly important vitamin,” Alex said.

When the vitamin D levels are low, the body is unable to absorb calcium.

“Calcium is the matrix of bone formation,” said Alex. “When you can’t absorb calcium, your bones aren’t going to get enough.”

Low calcium leads to a condition called secondary hyperparathyroidism. The parathyroid glands are responsible for keeping our calcium levels normal. When they can’t find calcium in the blood, they start searching for it elsewhere — ultimately finding it in our skeletons.

“The rise in parathyroid hormone leaches calcium out of the bone and puts it in the bloodstream, and before you know it, your bones have taken a huge hit. And that causes problems like bone discomfort and bone loss,” Alex said.

In children who are young enough that their epiphyses (the ends of their bones) haven’t closed yet, this vitamin D deficiency is called rickets. Children with rickets have weak, soft bones, which can lead to stunted growth, fractures and skeletal deformities such as bowed legs or a curved spine. A painful condition, rickets can also lead to intellectual disability. Unfortunately, rickets is on the rise.

In older children and adults, vitamin D deficiency is called osteomalacia. People with osteomalacia also have weak bones and experience skeletal pain and other negative symptoms.

“And osteomalacia leads to osteoporosis, because the bones just don’t have enough calcium to mineralize,” said Alex.

“The bones take a huge hit, but so do other cells. Muscles, including the heart, need calcium to contract. The immune cells need vitamin D to function, so they get hit. And then the brain, because, it turns out, neurons need it, too,” Alex said.

It also protects the endothelium, the layer of cells lining the inside of all of our blood vessels, making it important to cardiovascular health. And recent research indicates a relationship between chronic vitamin D insufficiency and an increased likelihood of Alzheimer’s disease. Other studies are exploring the vitamin’s possible roles in clinical depression, multiple sclerosis, diabetes, respiratory diseases, autoimmune disorders, infertility and certain types of cancer. 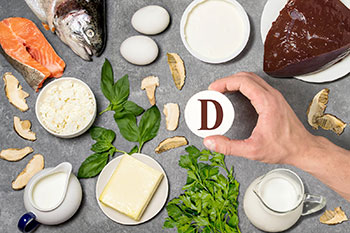 Vitamin D is naturally present in some foods, like fatty fish, cheese, eggs and mushrooms. Foods like dairy products and cereal are often fortified. According to the National Institutes of Health, the list of foods that naturally provide vitamin D is a short one compared to other vitamins, meaning that few people get enough from their diet alone.

We can also synthesize it in our bodies — but only when our skin is exposed to damaging ultraviolet (UV) rays from the sun. In fact, one of the likely explanations for the wide drop in vitamin D levels is that fewer people are working or spending time outdoors, and those who do use UV-blocking sunscreen.

Since food sources for vitamin D are limited, is more sun on our skin the solution? Should we stop using sunblock? Absolutely not, said Alex, who recommends the use of a vitamin D supplement (usually 5,000 units three days a week for normal maintenance) instead.

“The sun does bad things to the skin,” she said. “We really don’t want people to have much sun exposure.”

Step one in treating a deficiency is identifying it, so it’s important for patients to make sure their doctors are checking their vitamin D and calcium blood levels.

“I’ve seen people come in who have a severe deficiency — and I mean severe,” said Alex. “They often feel fatigued and achy everywhere, they don’t feel strong, and they’re usually depressed.”

The good news is that it doesn’t take long to raise their levels with supplements.

“Within weeks they feel so, so much better. It’s an easy fix, and we’re always happy to see it. It’s amazing to see how something so simple can make such a difference.”

According to the National Institutes of Health Office of Dietary Supplements, these foods are good ways to add vitamin D to your diet:

A.D. Lively is a central Arkansas-based freelance writer specializing in health and wellness.