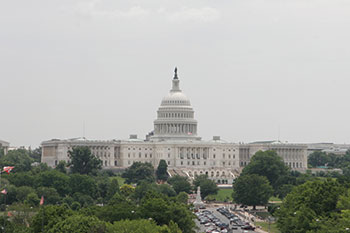 In early May, a delegation of Arkansas’ electric cooperative leaders traveled to Washington, D.C., to protect reliable and affordable power for Arkansans.

Our meetings with U.S. House and Senate staff went great. The staff members were very hospitable and wonderfully supportive of our issues. But, in today’s environment of legislative gridlock, even the best ideas are not likely to pass Congress and obtain the president’s signature. Prior to the current session of Congress, which began last year and ends next year, lawmakers barely avoided being the least productive Congress since the 1990s.

Today, most issues that could affect electric reliability and affordability originate in the executive branch in federal agencies such as the Federal Energy Regulatory Commission, the Department of Energy and the Department of Homeland Security.

So to cover all the bases, we also met with leaders from these agencies — secretaries, deputy secretaries, under-secretaries, assistant secretaries, administrators and commissioners, most of whom are presidential appointees.

My overwhelming impression from these meetings was this — we are already too late to get anything done in 2016. With only seven months left in office, many of these appointed public servants are prioritizing what is left of their time and have realized that many of their policy goals will not see reality.

As business leaders, we offered to help in developing a transition plan, to work with the career government service employees who work beneath the appointees to keep the government running, and to pass along our current projects to the next set of appointees. What we were told, quite clearly, was that our suggestion was not realistic, and that the next set of administration officials would have to figure it out just like they had.

Some students take a year off, a so-called “gap year,” between high school graduation and college to find themselves and define their life priorities. Maybe we should celebrate this year of transitory downtime as one administration ends and the next gets started. We could all use a break, a “gap year” in the political and regulatory process. People take vacations to get recharged, so maybe this time of rest and rejuvenation will allow us to make 2017 a year of unprecedented progress. We won’t give up, and we won’t quit promoting clean, reliable, affordable power for you and your neighbors. That’s the cooperative way.