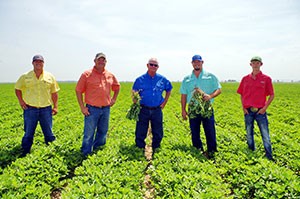 Wildy Family Farms of Manila (Mississippi County) was recently selected as the 2015 Arkansas Farm Family of the Year.

As Arkansas’ Farm Family of the Year, the Wildys will compete in the 2016 Swisher Sweets/Sunbelt Expo Southeastern Farmer of the Year program. A winner will be named from among 10 southeastern state winners next October in Moultrie, Ga.

David Wildy, a director for Mississippi County Electric Cooperative of Blytheville, credits his family heritage for the honor.

“I’ve never been more proud of my family,” Wildy said. “It’s one of the most rewarding, most exciting and most humbling things that has been bestowed upon us as a family. I think back in the 1920s, my grandfather, Ed Wildy, won the Arkansas Master Farm Family, before this program. And when I was about 4 years old, my dad won it in the late 1950s. It was in my dreams that this generation and my family could do the same thing.”

David and Patty Wildy oversee the farm where they grow soybeans, cotton, wheat, milo and peanuts on 9,200 acres. Wildy Family Farms is a fifth-generation farm established in 1938. In addition to David and Patty, other partners include their sons and daughters, Justin and Kristi Wildy, Tab and Taylor Wildy, Hayley Wildy, and Paul and Bethany Harris.

“My grandfather came to Mississippi County in 1914 and my dad came to the farm where we’re presently located back in 1938, so farming goes way back in our heritage,” Wildy said. “I’ve got two sons and a son-in-law back on the farm with me, and they’re beginning to take hold and carry on the tradition and understand what it means to be a family farm. It’s a very humbling experience, but we’re very proud to be able to represent Arkansas agriculture as the Arkansas Farm Family of the Year.”

Energy and water conservation, and environmental stewardship play a major part on the Wildy Farm. The farm is audited by a private firm dedicated to socially responsible environmental practices in on-farm production and that group has certified that Wildy Family Farms have met all standards and criteria in the process. New technologies are constantly being implemented to help increase profits for all crops to $100 per acre. And, the family is in the process of developing a farm succession plan to ensure the successful transition to future generations.

Wildy obtained an animal science degree from the University of Arkansas in 1975 and was a member of the Mississippi County Farm Bureau Board of Directors for seven years, serving as president in 1986. He served on the Arkansas Agriculture Department Board from 2005-2010, is a member of the St. Francis Levee District Board of Directors, the University of Arkansas Agriculture Development Council and numerous other boards and associations. The Wildys are also active members of First Lutheran Church of Blytheville.

“Arkansas Farm Bureau congratulates Wildy Family Farms for being named Arkansas Farm Family of the Year,” said Arkansas Farm Bureau President Randy Veach, a cotton, soybean and wheat farmer from Manila. “Also being from Mississippi County, I’ve known the Wildys for many years and served on the county Farm Bureau Board of Directors with David. They have a model farming operation that not only has been successful in consistently producing high crop yields, but because of their business plan, will endure for generations to come.”

The Farm Family of the Year program, now in its 68th year, is the longest-running farm family recognition program of its type in the United States. It begins with selection of the top farm family in each county. Then, eight district Farm Families of the Year are selected. The competition is judged on production, efficiency and management of farm operations, family life and rural/community leadership and values.

Wildy Family Farms was selected from the eight 2015 District Farm Family of the Year winners, which included: