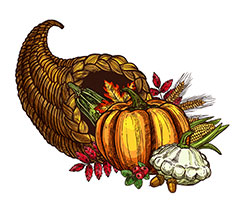 Fifty years ago there was a popular television game show called “To Tell the Truth,” which was revived on ABC in prime time last summer. In each episode, three people appear, each claiming to be the same person; usually someone with an unusual occupation. A panel of celebrities then asks questions of the three, attempting to separate the real person from the imposters. The show ends with the big reveal, as the announcer asks, “Will the real ___ ___  please stand up?”

Reflecting on the origins of our Thanksgiving holiday, it seems we have a similar situation, as various historians offer their opinions of the real “first Thanksgiving.”

Tradition hails to November 1621, when the pilgrims in the Plymouth colony shared a harvest feast with the native Wampanoag Indians. But was this the first thanksgiving event?

Berkeley plantation in Virginia is recorded as recognizing a holy day of Thanksgiving in December 1619. Colonists in Jamestown, Virginia, celebrated a thanksgiving prayer service commemorating the arrival of supply ships in the spring of 1610. Before that, English settlers joined native Abenaki Indians at the Kennebec River in Maine for a harvest feast in 1607. In 1564, French Huguenot colonists held a day of thanksgiving near Jacksonville, Florida. And in 1541, at about the same time Hernando de Soto was exploring the Arkansas wilderness, Spanish conquistador Francisco Vasquez de Coronado and his 1,500 men paused from their search for the seven cities of gold to celebrate thanksgiving in the area of the Texas Panhandle.

In Arkansas, Thanksgiving was first observed as a state holiday on Dec. 9, 1847, following the impassioned appeal of Sarah Josepha Hale, the author of the poem “Mary had a Little Lamb.”

Our forefathers had much to be thankful for, but so do we. Despite what appears to be bleak news from around the world, there is also much good to be found. In the midst of disaster, there are rescue workers. In times of civil unrest, we have protective civil servants. When facing a health crisis, we have trained medical workers. When sorrow tests our souls, we have spiritual leaders.

In Arkansas, we can also be thankful for our abundance of reliable, affordable energy, and for new technologies that bring new benefits. Today, one of every five kilowatt-hours produced by your electric cooperative comes from wind, solar, hydropower or geothermal sources, and we are watching for opportunities to add more. Equally as important, this new portfolio of energy is not taxing your pocketbook: the most recent federal report ranks Arkansas’ residential electric rates as the third-lowest in the nation.

Repeating the words of the Arkansas Thanksgiving proclamation of 1847, as signed by then-governor Thomas Drew:

Whereas, an all wise and merciful Providence has dispensed blessings of the most bountiful and diversified character among the people of this state, in the abundance of the various agricultural crops, the universal prosperity of our people and their unexampled good health, it is deemed worthy of a grateful people to make public manifestation of their sense of the renewed obligations under which we have been placed, by the appointment of a day of general THANKSGIVING throughout the state.