The subject of the dispute: whether or not the rural electric cooperatives could have their own mascot — Willie Wiredhand — separate and distinct from the IOU mascot dubbed Reddy Kilowatt.

The Reddy Kilowatt character, established in the 1930s, was 80% owned by creator Ashton Collins. The IOUs — 109 of them at that time — owned the other 20%. (Edison Electric Institute is their trade association). These IOUs were paying for the use of the mascot at a price of 1 cent per meter per year, which would be equivalent to more than $2.5 million today. Originally, rural electric cooperatives had wanted to use the same mascot as the IOUs, but these for-profit utilities — as was their custom — said no to the cooperatives.

In 1956, the IOUs filed a lawsuit claiming that Willie was a trademark infringement and should not be permitted to be the cooperatives’ mascot. Fortunately, Judge Harry E. Watkins found that “the names Reddy Kilowatt and Willie Wiredhand are entirely different [and]the figures themselves do not look alike. … Reddy is made up of a body, arms and legs of jagged lines simulating lightning … with a round head having a nose made up from an electric light bulb, and plug-in-socket for ears … [whereas]Willie Wiredhand is made up of a male plug for the hips and legs, a wire for the body, and a socket for the head, with the push button thereof representing the nose.” Accordingly, the court ruled in Willie’s favor! 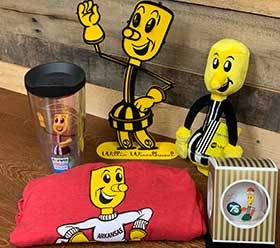 Today, electric cooperatives and their members are proud of their business model, and they are equally proud of their Willie Wiredhand mascot. That pride has found an outlet in Willie Wiredhand merchandise, ranging from apparel to household and office products to seasonal items. The photo above shows an example of the many types of Willie cooperative logo items that we sell at our headquarters in Little Rock.

Willie is a symbol of the pride that we have in our cooperative business model and our dedication to serving our electric cooperative members. We want you, our members, to know how blessed we feel to provide you with electricity in a not-for-profit business model and to serve your homes, businesses and communities. This pride is just part of the cooperative difference.