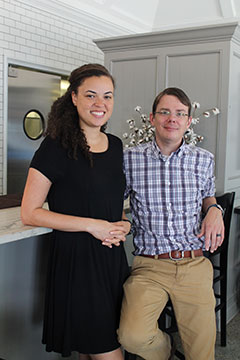 When asked by the Lawrence investment group, Wilson’s new owners, what they’d most like to see added or brought back to their town, Wilson’s residents said reopening the historic Wilson Tavern, the town’s main eatery, was at the top of their wish list. The group recruited a talented Memphis couple, chefs Joe Cartwright and Shari’ Haley, who each had spent years in the kitchens of several top Memphis restaurants. The Cartwrights, the cafe’s owners and chefs, opened the restaurant as Wilson Cafe in December 2013 and permanently moved to Wilson the following spring.

“It took us a couple of months to decide to accept the offer, but we are proud of this place,” Joe said. “And our customers keep coming back.”

Wilson Cafe is built in the same charming Tudor Revival style as the rest of the iconic town square. 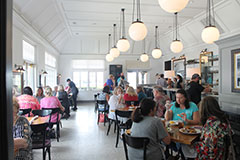 The bright and airy cafe is filled daily with happy patrons who come back again and again.

Before we even get to the food, the restaurant is beautiful. Built in the town’s signature Tudor Revival style, the spacious main dining room is bright and airy, running the length of a long, Carrera marble bar set off by arrangements of the puffy cotton sprigs that made Wilson an agricultural empire years ago. Huge windows, rich wood tables, drop lights from the high ceiling and oversized black and white photographs of Wilson in its 1930s heyday complete the look. The bar room at the end of the dining area is darker, befitting a cozy tavern, and several small meeting spaces flow from both areas.

It’s a place you’d expect to see in Memphis or Little Rock rather than in a tiny Delta farming community. At lunchtime, the place is packed with people from miles around, more than a few making a detour to Wilson just for the food. 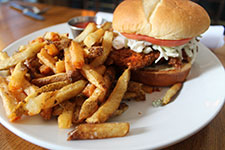 Joe described the menu above all else as approachable. “This is not a place for avant-garde-style cuisine. This is a place for recognizable elegance. It’s definitely Southern-inspired food, but we are very conscious about the ingredients we’re using and how we are putting it on a plate for you to eat.”

The Cartwrights and another chef they recruited from Memphis, Jon Sawrie, start by ordering the very best ingredients to be found. And by best, I mean the beef is certified Angus, the steaks are USDA Prime cuts, the produce is sourced locally (often from Wilson Gardens across the street), the catfish comes from Mississippi instead of Vietnam, the seafood is overnighted from the deep, cool oceans of Hawaii and the amazing bacon that comes on a burger costs the cafe $1.30 a strip. They don’t skimp on using the highest quality ingredients they can find, Joe said, because that’s part of their philosophy.

“If you start off with garbage, it’s hard to make something nice out of it. But if you start with a great quality product, it’s kind of hard to screw it up. We get the best food available and let it shine.”

Not that they don’t enhance it along the way. Their pork porterhouse — available on the dinner menu — is as Southern a pork chop as you can imagine, brined for a day and a half in bourbon and sweet tea before hitting the grill. Likewise, the pork loin used in several dishes is smoked for eight hours just outside the kitchen, giving it a complex, rich flavor they often pair with a blueberry gastrique.

Joe said one of Sawrie’s creations, a dinner appetizer called Greens & Cornbread, is his favorite dish he’s had on any menu in his career. “It’s little griddle-fried hoecakes with this bubbling casserole of collard greens, cream cheese, pepperjack and bacon that you smear on the cornbread,” he described. “I had nothing to do with the creation of it, but it’s one of my favorite things I’ve ever eaten.”

Wilson Cafe’s dinner features mainstays like steaks, catfish, pasta and Scampi & Grits, while the lunch menu revolves around plate lunches, salads, burgers, sandwiches and a fixings-filled Grilled Cheese of the Day. My Firebird sandwich was their spin on a buffalo chicken sandwich. The seasoned crust on the deep-fried chicken breast was crisp and savory, set off by a smoky-sweet buffalo sauce, tangy dill pickle slaw, tomato and onion. Even the bun was ridiculously good. 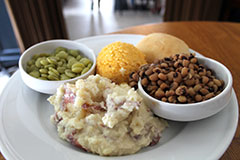 This Vegetable Plate of mashed potatoes, lima beans, cheese grits, a roll and purple hull peas, is all made from scratch, often using local produce.

Personally, I’m drawn to the vegetable plates. Wilson Cafe’s is exceptional, whatever combination you choose. The pinto beans we tried had an appealing smokiness; the lima beans were cooked just right without being soggy; the dense scoop of cheese grits had a baked-grits texture and an intense cheddar flavor, and the real, skins-on mashed potatoes could make you believe in love again.

Nothing in their kitchen comes from a boxed mix; even their dressings are handmade.

Joe explained that they see every ingredient as almost sacred. “Everything on a plate gave its life for you, whether it’s a potato or a green bean or a cow. It gave its life for you to enjoy,” he said. To that end, they teach kitchen staff to respect the ingredients as they’re cooking them and as they plate them, so diners can then respect the experience of eating them. “Once you start thinking that way, it adds a whole new dimension to cooking and eating,” he said.

The blueberry pie, made by Shari’, has a dense and creamy texture bursting with flavor.

As for Shari’, her particular genius is the desserts menu. And I assure you, diet or not, skipping dessert at Wilson Cafe is folly. Daily options vary, usually including a warm, donut bread pudding, cakes and a strawberry shortcake in a quaint mini-Mason jar, but her homemade pies are worth the drive on their own. The crusts, made with shortening and the ice-cold water, are everything a pie crust should be. On his first visit in June, my husband tried the buttermilk pie and declared it one of the single best things he had ever tasted. He hasn’t stopped talking about it since. Shari’ is modest about them, but trust me, they’re a Best of Arkansas kind of thing.

Next time you’re anywhere near Wilson, make a detour for lunch or dinner, or even just pie. This is Arkansas living done right. 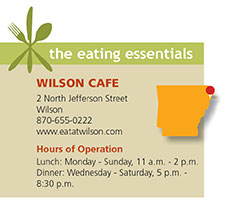 For complete menus, including the current daily special, be sure to check out www.eatatwilson.com.