Archeological museums can be as dry as the dust of the lost civilizations they portray.

That’s happily not the case at Hampson Archeological Museum State Park, thanks to lively displays in its sleek 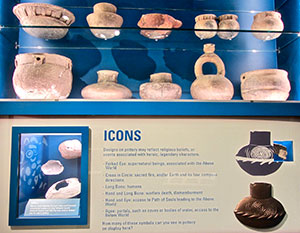 new building that opened a year ago. Part of the captivating freshness comes from hands-on exhibits that appeal to both adults and youngsters.

“Our visitation has more than doubled compared to the old facility,” says Brenda Parrish, an interpreter at the state park on the town square of Wilson, adding that “exhibits have created an experience that keeps visitors engaged and wanting to learn more. Children sometimes race to the interactive displays, so families tend to stay longer.”

At 8,580 square feet, the new museum is five times larger than its demolished predecessor, which mainly exhibited pottery and other artifacts in glass cases. The pottery, made at the nearby Nodena Site from around A.D. 1400 to 1600, is still on display, but near the rear of the museum.

Among the new exhibits, Parrish says, “the most popular is the Archeology Table, which gives a sense of what it is like to be an archeologist. Visitors sift through dirt to uncover artifacts from the past.”

Especially popular with youngsters is the interactive “Your Personal Pottery” display. It shows the silhouette of a 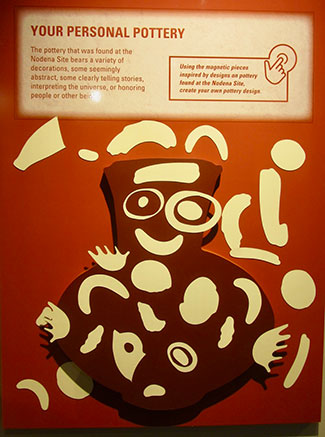 villager’s face on a magnetic board, along with an assortment of attachable designs. Visitors are invited to create their own facial patterns by fastening pieces of varied shapes inspired by Nodena Site pottery.

Another hands-on exhibit, “Build-a-Being,” delves into the supernatural world. A sign explains that the village’s residents pictured a three-level universe with three distinctive sets of inhabitants. Birds dwelled in the Above World. People and land animals lived in the Middle World. The Below World belonged to reptiles and river animals.

In this cosmos, fantasy creatures had elements from two or three levels — for example, a winged serpent. Visitors are encouraged to “turn the blocks to create a creature that captures your imagination” and to consider “Why did you select these elements? How would you expect your creature to behave?”

Because the Native Americans of Nodena left no written records, details of their lives are largely a matter of informed speculation. Some aspects of their culture have been fleshed out over the years in excavations by the University of Arkansas, the Alabama Museum of Natural History and Arkansas Archeological Survey. 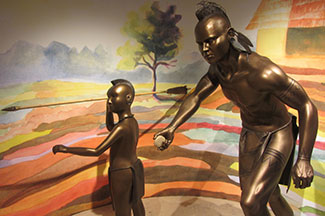 a disc-shaped stone. Called “chunkey,” it may have inspired wagering, as explained in a posting at the scene:

“After one male competitor rolled a stone disc, he and his opponent threw spear-like sticks to where they thought it would stop. The closer stick earned points.” The game “likely honed skills needed for hunting and warfare. It attracted spirited betting. Intricately worked playing stones were cherished.”

One of three state parks devoted to prehistoric cultures, along with Toltec Mounds and Parkin, Hampson is named for avid archeological amateur James K. Hampson, who began study of the site on his plantation in 1927. 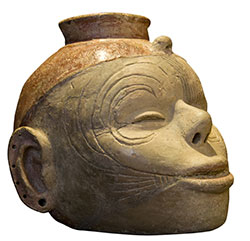 This vessel is distinctive for portraying an actual person.

For visitors who make it to the cases of pottery, the centerpiece is an effigy-head vessel made in the middle of the 16th century. It is distinctive for portraying an actual person rather than an abstract image typical of the region’s Late Mississippian culture.

A big-city museum would be delighted to display this detailed work, which likely represents an important person in the community such as a political or religious leader, a renowned warrior or a revered ancestor. Or it may have been a war trophy, given that decapitation of an enemy seems to have been common. 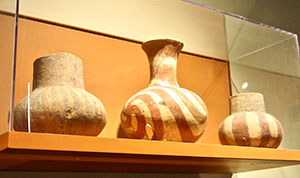 The new museum marks another step in the revival of Wilson. Founded as a lumber town in the 1880s, it boasts distinctive Tudor facades on the town square that were commissioned the 1920s by a Wilson couple after a honeymoon in England. Billionaire investor Gaylon Lawrence Jr., head of the Lawrence Group that owns most of the town’s commercial real estate and farmland, is working to make the town of 900 a center of art and culture.

One addition of interest to hungry visitors is the Wilson Cafe, which can lay claim to being the best restaurant in any Arkansas community of fewer than 1,000 people. It makes a delectable complement to touring what is now a museum worth a journey.