equals better. True or not, that premise is no longer a prime focus of the Hope Watermelon Festival, one of Arkansas’ most popular annual celebrations.

A festival highlight dating back to the 1920s was a contest to select and salute the largest local melons, which could weigh 200 pounds and more. The gargantuan specimens, honored with prizes, sometimes got national exposure on network television.

Today, family-focused activities dominate the annual schedule at Hope Fair Park, with a notable novelty this year being the Tyke Town play area for kids 5 and younger. A few mega-melons will be weighed and auctioned on the final morning of the Aug. 8-10 festivities — but without a competition, trophies or much ballyhoo.

The chamber organizes the Hope Watermelon Festival, with Moore serving as the event’s director. It also is a co-sponsor of the Aug. 31 contest at Historic Washington, where Moore will be one of the three judges.

Do rest assured that there will be heaps of watermelons at this month’s Hope fest, in the southwest Arkansas town where Bill Clinton and Mike Huckabee were born. The juicy red fruit will be sliced from iced melons of grocery-store size, then sold for sweet snacking to the 15,000 or more visitors expected during the three good-time days.

At the first festival in 1926, watermelon was served free to all visitors, many of whom arrived by train. That inaugural event was inspired by a then-record 136-pound melon grown in 1925 and shipped to President Calvin Coolidge at the White House. Its crate was labeled “The Wonder Melon from the Wonder State” — then Arkansas’ nickname. The comment, if any, of “Silent Cal” went unrecorded.

After 1930, the ravages of the Great Depression brought an end to the festival for nearly a half-century, as reported in the Encyclopedia of Arkansas History & Culture.
It was revived in 1977 at the urging of a Hempstead County melon evangelist, although without the big parade that had kicked off the fun in the Roaring ’20s. This year’s festival is designated as the 43rd annual event.

Watermelon fans of all ages can enjoy a sweet time in Hope Aug. 8-10.. photo courtesy of Arkansas Department of Parks and Tourism

Watermelon-themed contests loom large on the 2019 schedule, which also includes a mix of live music and a panoply of other events that have little or nothing to do with melons.

Among opening-day activities on Aug. 8 are a tae kwon do demonstration, professional wrestling, a dog show and dancing by a Historic Washington troupe. On Aug. 9, competitors face off in a Baggo tournament, the popular game that involves tossing bean bags through a hole in a raised platform.

On Aug. 10, the festival’s biggest day, exhaustion might overtake any visitor who tries to take in all the non-melon programs. Activities start at 7:30 a.m. with a 5K run and walk and wrap up at 8:30 p.m. with a concert by longtime Christian country band Diamond Rio.

In between come such diverse diversions as a classic car show, a display of antique engines, announcement of the beautiful baby pageant’s winners, a costumed Mickey Mouse meet-and-greet, a kids’ search for money in a haystack, a motorcycle show, a fishing derby, an arm-wrestling competition, a swimming exhibition, a softball tournament and a golf tournament. 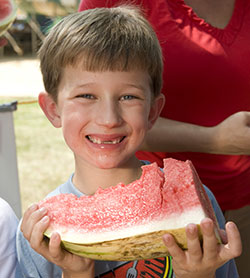 From snacking to seed spitting, the Hope Watermelon Festival offers plenty to smile about. photo courtsey of Arkansas Department of Parks and Tourism

This is not to ignore watermelon-themed events. On the Aug. 9 schedule is the Watermelon Olympics, in which teams from businesses, churches and other entities roll, toss, tote and otherwise propel melons of normal size.

Officeholders take part in the Aug. 10 Politically Correct Watermelon Eating Contest. Last summer’s competitors included Gov. Asa Hutchinson, but the winner was a Hempstead County officeholder. After the politicians finish, a similar competition is open to the general public. Speed, not sheer quantity, is the goal.

“In our eating contests, participants are given a quarter slice of melon,” Moore says. “The winner is the one who eats the melon to the rind before anyone else. The prize is a trophy.”

Following the eating events, a Seed-Spitting Competition tests the wind power of participants. It’ll be a challenge to approach the world’s record of 75 feet, 2 inches, set years ago in Texas. But the Hempstead County spitters will be giving it their best shot.

Admission to the festival grounds is free, with a $5 fee for parking. There are charges for some events and activities, but Moore emphasizes, “Attendees can enjoy the entire festival without paying anything. And prices are reasonable for concessions,” which this year will include a vegan food truck along with the perennial corn dogs, funnel cakes and homemade ice cream.

A mostly friendly debate persists between fans of Hempstead County’s melons and devotees of the “world’s sweetest” varieties grown up north around Cave City, which stages its festival in late July (July 25-27 this year).

For Arkansas fans of the seed-spangled delicacy, the debate is a no-lose proposition. How sweet it is.