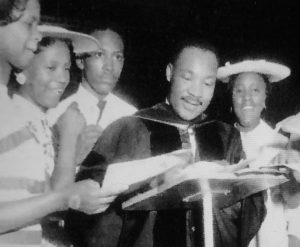 Martin Luther King Jr. was welcomed in 1958 by students and faculty at Arkansas Agricultural, Mechanical and Normal College, now the University of Arkansas at Pine Bluff.

Martin Luther King Jr. was not yet a household name when he delivered the 1958 commencement address at what is now the University of Arkansas at Pine Bluff (UAPB).

Then 29, the Baptist minister was five years away from issuing his famous “Letter from a Birmingham Jail” to justify peaceful civil rights protests. He was also five years away from making the legendary “I Have a Dream” speech on Washington’s National Mall. He was six years away from winning the Nobel Peace Prize. His crusade for racial equality would span a dizzying decade before he was shot to death in Memphis on April 4, 1968. His legacy is honored annually by Martin Luther King Jr. Day, on Jan. 16 this year.

The former Hazzard Gymnasium, where King spoke 65 years ago to 233 new graduates of what was then Arkansas Agricultural, Mechanical and Normal College (AM&N), is among 22 locations on Pine Bluff’s Delta Civil Rights Legacy Trail. The building at 1387 University Drive now houses the school’s Division of Military Science. Some of the trail’s other structures are gone, but their historical roles are spelled out at explorepinebluff.com/delta-civil-rights-legacy-trail.

Pine Bluff may not leap to mind as an important location for the civil rights movement. But Sheri Storie, executive director of Pine Bluff Advertising and Promotion Commission, makes the case for its stature: “Pine Bluff boasts credentials on par with Selma, Little Rock and Montgomery. Pine Bluff was the site of boycotts, sit-ins, demonstrations and bombings as African Americans demanded an end to segregated facilities and jobs in the early 1960s.”

In his speech, King spoke of the methods, benefits and sacrifices necessary on the road to racial freedom and equality for Black Americans. He said that “through the use of nonviolence, understanding and goodwill, we will achieve desegregation and integration. After we are brought together physically, we will come together spiritually because men will see that it is right and natural.”

During the address, King also employed some of the language that would later appear in his 1965 “I Have a Dream” speech — including the indelible phrase “free at last, free at last.” He received several rounds of applause and a standing ovation from more than 1,000 people who attended the graduation.

The former Woolworth building is on the Civil Rights Legacy Trail, along with several other protest locations. Among them is the structure that housed the former Missouri Pacific train station and Greyhound bus depot. A plaque denotes the onetime headquarters of the city’s Student Nonviolent Coordinating Committee chapter, a major force in the demonstrations.

There’s no hint outside St. James United Methodist Church, 900 University Drive, that it was bombed in 1963. An incendiary device broke windows and part of the church caught fire, as described on the trail’s website. But quick discovery led to the fire being extinguished before major damage. Nobody was injured. The perpetrators were never identified. 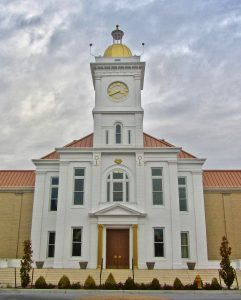 The Jefferson County Courthouse is a historic landmark on the Delta Civil Rights Legacy Trail.

The Jefferson County Courthouse, 101 W. Barraque St., is listed on the trail because a lynching took place outside the building in 1892. Two Black men accused of killing a white merchant were hanged on adjacent telegraph poles and shot more than 100 times.

Some interracial history is painful to recall. But the progress mapped out by many locations on Pine Bluff’s Delta Civil Rights Legacy Trail gives heartening hope of continued progress.