Whether your favorite school subject was history or whether it was lunch, Little Rock’s Historic Arkansas Museum (HAM) has a series for you.

“History is Served,” with events three to four times a year, started back in 2017 as a way to feed guests intellectually, socially and physically, says HAM’s Director of Community Engagement, Ellen Korenblat.

“Heritage foodways have always been a part of what we do here at the museum,” she says. “We’ve always had 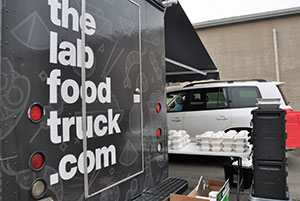 people demonstrating pioneer cooking and churning butter, using a Dutch oven. So it’s always been part of the story. Food is just common for everyone and something that’s very relatable to people as a way to learn about history and culture.”

She adds, “The idea was to use this kind of communal dinner setting and Arkansas foodways-related events to talk about history and food history.”

But the pandemic has put the kibosh on communal dinner settings, and it forced the museum to postpone its first dinner of this year’s theme — the Arkansas Delta — in May.

Still, HAM, refusing to be hampered, came up with a new plan. And now “History is Served” is being served 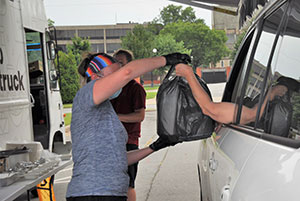 But it has required some retooling and reconfiguring, starting with the food.

Korenblat says, “There are so many factors to planning this. In the past, the chefs — most of them associated with a restaurant — could do all their prep work at the restaurant and come to our commercial kitchen, finish that out … as they were serving it.

“Now it all has to be done off-site in a way that lasts from your car to the ride home.”

Then there was the festivity factor to consider.

“Will it work for our guests?” Korenblat asks. “Are they still interested in it, because the past dinners have been so focused on the communal experience? We had long harvest tables; people were elbow-to-elbow. And a lot of people talked about how they met other people and even made plans with them and things like that.” 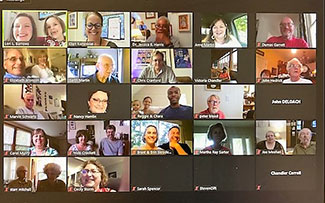 In this screenshot, Lori Burrows, appearing top left with her daughter, Greta, moderates a Zoom panel discussion, part of the virtual “History is Served” event.

all in our own homes.”

A night (not) at the museum

On July 16, the museum was able to host its scheduled Hot Tamales and BBQ program, thanks to the technology of the Zoom video conferencing app; the food of The Lab Food Truck’s Chef Gilbert Alaquinez; and sponsorship from the Electric Cooperatives of Arkansas and the Arkansas Rice Federation.

We’ll set the scene … and set the table.

Between the hours of 4 to 6 p.m., participants are invited to head downtown, don their masks and pick up their 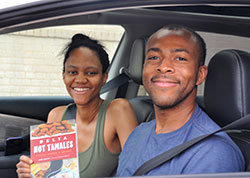 meals and swag bags in HAM’s makeshift alley drive-thru. Guests could choose to dine before or during or after the 7 p.m. online panel discussion, moderated by Lori Burrows, president of the HAM Foundation Board of Directors. Burrows, who is vice president and general counsel for Arkansas Electric Cooperative Corporation (AECC) and Arkansas Electric Cooperatives, Inc. (AECI), has some help from her Hello-Kitty-pajama-clad 7-year-old daughter, Greta.

Burrows says, “One of my favorite parts of the new format is that my whole family could join in from the comfort of our home. The prior ‘History is Served’ meals were only for adults. My husband and I enjoyed them as date nights, but now it can be a fun family meal.”

Immediately, the event is a success from a sales standpoint. 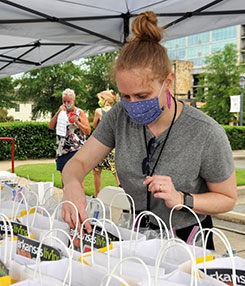 Arkansas Living magazines, courtesy of the Electric Cooperatives of Arkansas, peek out of swag bags.

Korenblat says, “We’ve been super pleased. We’ve exceeded what we’ve done in the past because we were limited by how many seats we actually had. … Now, we’re just limited by how much (food) the chef thinks he can prepare. In the past we only had 64 seats, and we’ve sold 85 for this dinner. We’re really excited, and we’re so glad people responded and decided to try it out.”

One of the evening’s panelists is Dr. Jessica B. Harris, the 2020 James Beard Lifetime Achievement Award recipient, from her New York home. The other is Anne Martin, author of Delta Hot Tamales: History, Stories & Recipes, joining from her Mississippi home, specifically from her driveway where the cab of 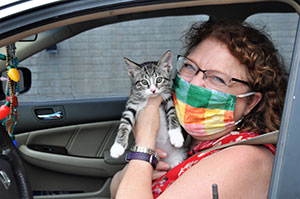 Curbside dinners and virtual panel discussions allow this year’s “History is Served” events to be enjoyed by all family members, from adults to kids to kitties.

“We’re able to have them be a part of our program since we’re doing it virtually,” Korenblat says. “It’s not something we would have been able to do if we were doing it on-site, getting people from across the country to fly in for it.”

Prior to the panel presentation, Alaquinez speaks about his carryout five-course feast that — foil and disposable boxes aside — seems far more fancy-restaurant than food-truck.

“First and foremost, let me just say, there is too much food, too much in the Delta, to put on a menu — let’s just start there,” Alaquinez tells his Zoom diners. “It was very difficult trying to pick five things,” particularly five things that would work well as a to-go option. 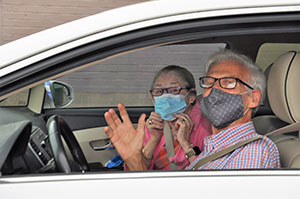 He adds, “Our food truck — we do Latin-Asian kind of fusion little nuances to the food. Doing some research [on]the Delta, I learned that the Chinese actually had some influences, small influences, but influences nonetheless. So I thought it was pretty cool to add some of those influences and then some of my little twists on some of the menu.”

The meal starts with a smoky first course of field peas prepared with pork belly and topped with a lively chow chow. Next is rice-crusted chicken, accented with madras curry and Arkansas tomato gravy over Ralston Family Farms Golden Rice.

As the program topic is Hot Tamales and BBQ, of course Alaquinez includes his own take on both. A pork rib, 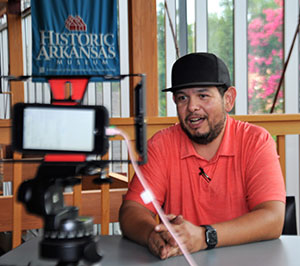 After preparing a five-course, to-go meal for 85, Chef Gilbert Alaquinez of The Lab Food Truck explains the menu to “History is Served” participants via Zoom.

spiced with Ethiopian berbere and dressed with a sorghum-hoisin sauce, is served with turnip greens and candied sweet potatoes. His cornmeal-and-masa tamale is filled with guajillo-braised prime beef brisket and topped with smoked tomato beef chili.

And for dessert, there are chess pies; Alaquinez’s spicier version of the Southern sweet of custard and cornmeal features star anise, cardamom and clove.

While history inspires the program and the provisions, Korenblat says, chefs are encouraged to take modern liberties and make menus their own.

She says, “The people who we work with are so creative, and they are really into it. It sparks their creativity to do something a little bit different than what they do on a regular basis.”

Food historian Dr. Harris speaks of African American foods of and in the Mississippi Delta.

“The Delta became, by the 1910s and 1920s, a place of dying hopes and dreams, one of grinding poverty, broken promises and disappearing dreams. … The resulting African American food history in the Delta, therefore, is one of constant alchemy, one that transmuted items others discounted as inedible or unwanted into their regional specialties.”

For example, she says, “Turnip greens are a poor-folks’ dish that uses the tops of the turnips that were discarded by others. Add fatback — another less-valued thing — and seasoning, and it became a tangy delicacy to be savored as a side dish.”

Martin has not only researched and written about tamales, she has co-founded a festival celebrating them.

The hot tamale “does have deep roots in a Mexican heritage,” Martin says. “It either came from soldiers 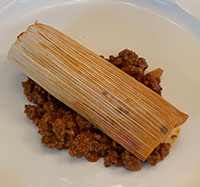 She continues, “What we all believe happened is that the Mexican tamale found its way to the Mississippi Delta, and it was the African American cook, mainly the women, who saw this portable food and thought, ‘I can make that.’ The ingredients were very simple. They were ingredients that were found in most homes at that time. … They worked on making this hot tamale that could be packed up and taken 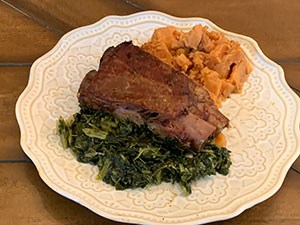 A pork rib, turnip greens and candied sweet potatoes and a tamale with chili — all prepared by The Lab Food Truck — are plated at home before the evening’s panel discussion.

to the field, and it was portable. It was wrapped in a corn shuck, and  … it could be eaten hot or cold.”

History in the making

This month, it’s Italian food that will have participants smiling. The next ‘History is Served’ — about the Italian immigrants that worked on Sunnyside Plantation near Lake Village in the 1890s — is planned for Sept. 17. (Tickets, $60 per person or $50 per museum member, are sold at historicarkansas.org.) It, too, will be a curbisde/virtual event, as will the other two hosted by HAM this year.

Jacquelyn Compton, owner of The Pizzeria in Little Rock, will be the chef for the September dinner, which originally was scheduled for May.

Compton says while she’s waiting until closer to the event to finalize her menu, based on what’s fresh and locally available, “My plan is to do it with a good mix of Arkansas and Italian influence.”

And she plans to include instructions for diners — a step The Pizzeria has taken for their takeout customers during the coronavirus crisis.

“We’re going to take the time to prepare the instructions so that you can enjoy it at home the same way we would prepare it for you,” Compton says. “Those types of things make it a little more interactive, a little bit more fun. … We’ll take that same approach with this dinner, knowing that people are going to possibly need to assemble some things so that they can experience it the way we want them to experience it, as opposed to, ‘We put it all together and hope it travels well.’”

And Korenblat hopes HAM supporters will continue to have an appetite for virtual events.

“I think most people are looking around and realizing that they’ve got to adapt in some way to carry on their programing,” she says. “So we’re just trying to keep up with everybody else.”

And keep serving “History is Served.”